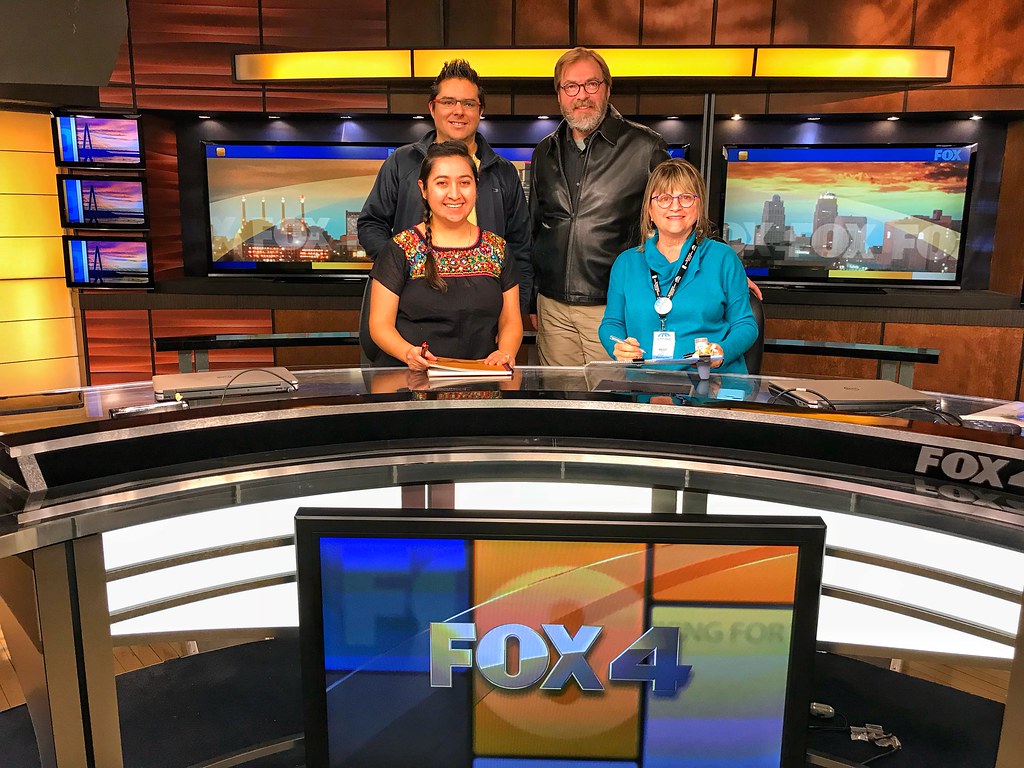 4 March 2018. No, even though it might look like it, this is not the cast from the Murphy Brown reboot! Urban Sketchers Kansas City has been all over the media this past week, making broadcast appearances on two different networks, hanging art in prestigious galleries, and welcoming an influx of new members. Yesterday morning Liz, Peggy, Ivan, and I were up at the crack of dawn and hanging out in the Fox 4 Green Room in preparation for a segment that kicked off a fun and intense day of group sketching. 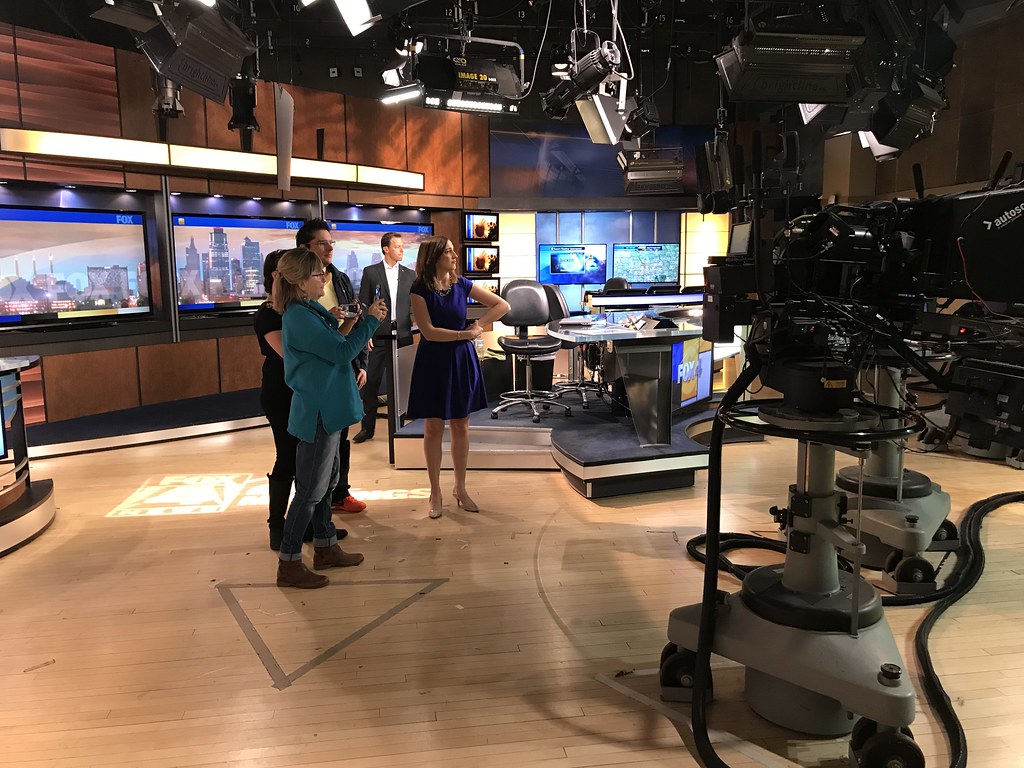 Behind the scenes, we got a chance to hang out with the news anchors and see what goes into the making of a news show. The television personalities walked on and off camera incredibly nonchalantly, engaged in conversation with us one second, abruptly stopping to do a promo, then picking up the chat again without missing a beat.

Our segment was a great opportunity to share with a larger audience just what in the heck an urban sketcher is, and to invite folks to come out and join us for the sketch out taking place later in the morning. 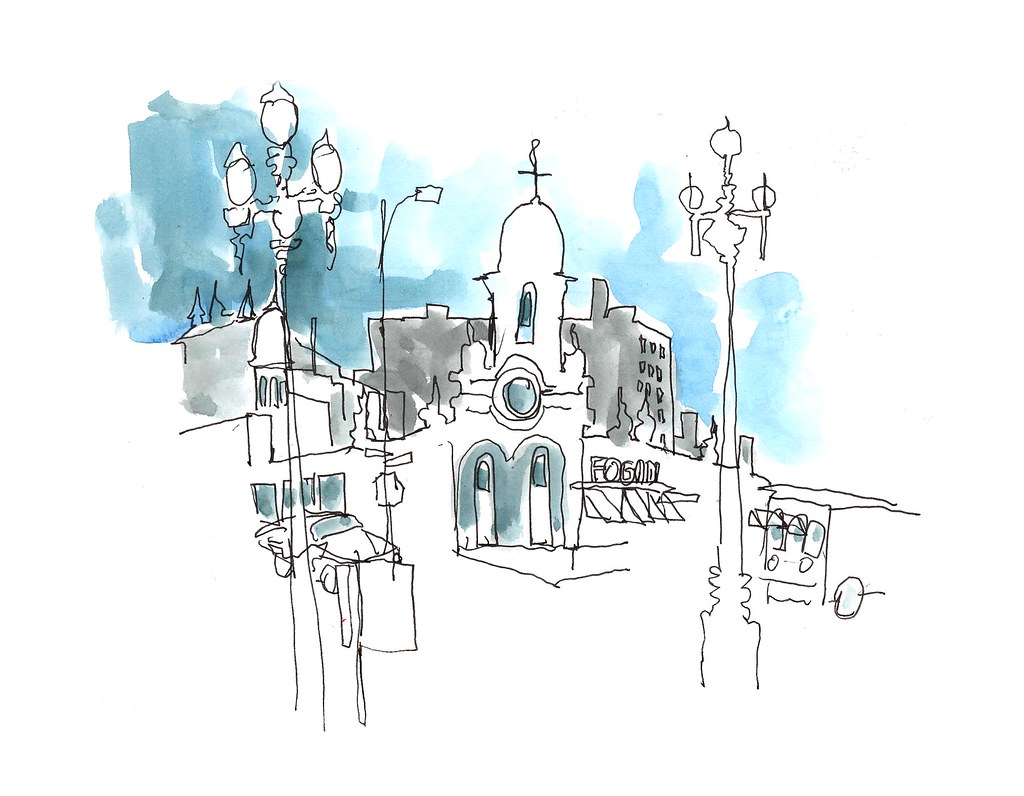 Living in Kansas City, I sometimes forget about the Country Club Plaza. The architecture of the area, inspired by that of Seville, Spain, is just about as far from a “Prairie-style construction” as you could possibly imagine. 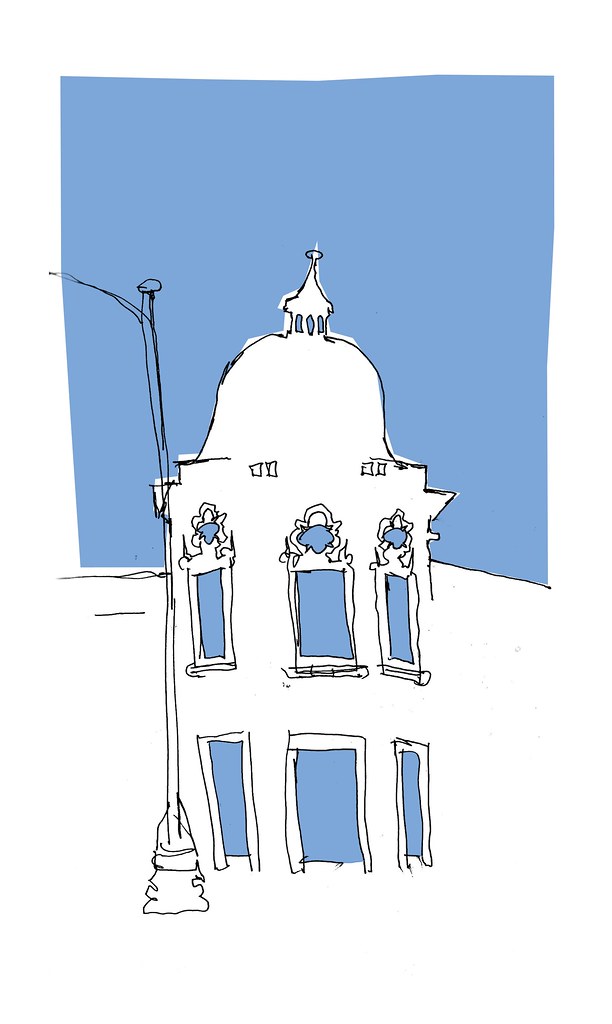 I chide myself for neglecting to really look at an area that is for most residents a ubiquitous part of the city. I drive through the Plaza. I shop there. I dine there. But have I ever stopped to just examine the complexity and visual interest of the silhouettes that create the distinctive “look?” The answer, it seems, is no, I have not. 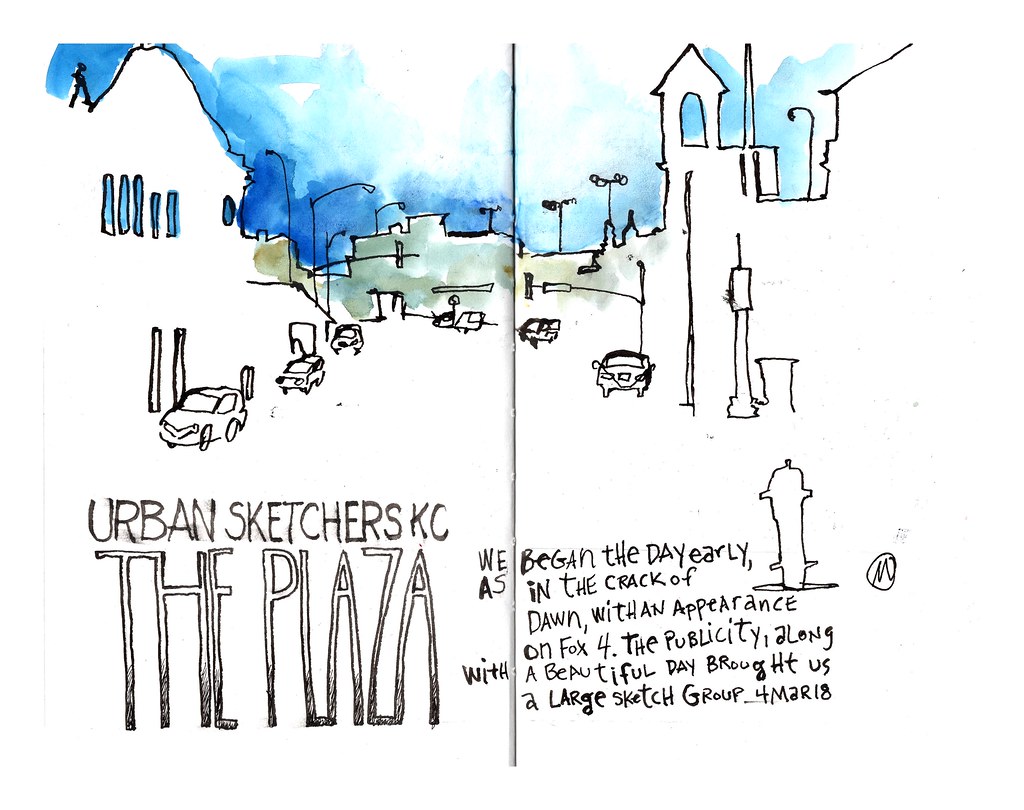 So, for our Plaza-themed sketch out, I used the lion’s share of my time to focus almost entirely on that part of the scene where the sky meets the architecture, filling in only enough detail along the way to generate a sense of space. 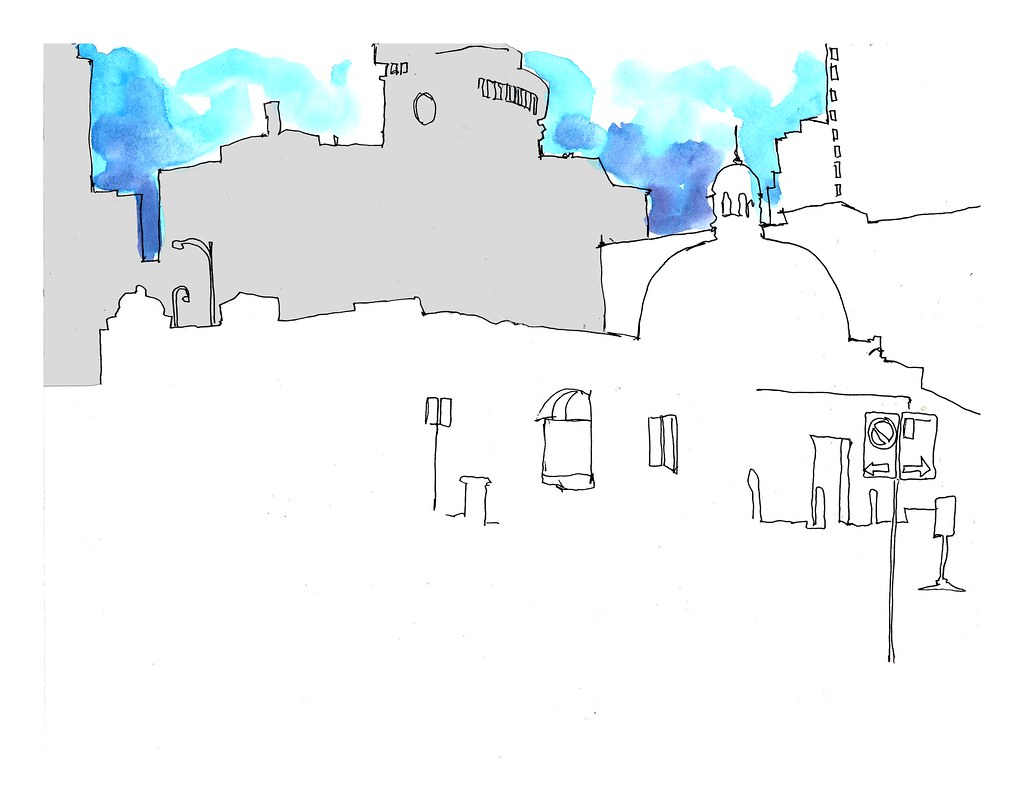 One thing I purposely try to do is include street signs and light poles. These ever present elements are not only part of the environmental tapestry, but they also help to establish a sense of scale and space. 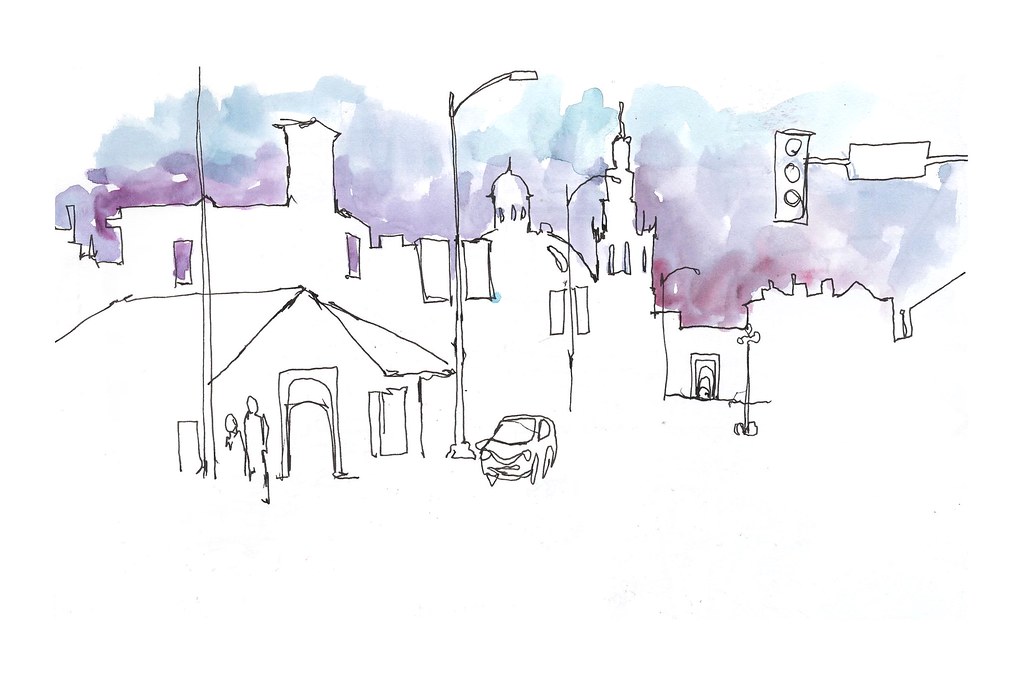 It’s interesting to me that the light poles add so much to a composition. 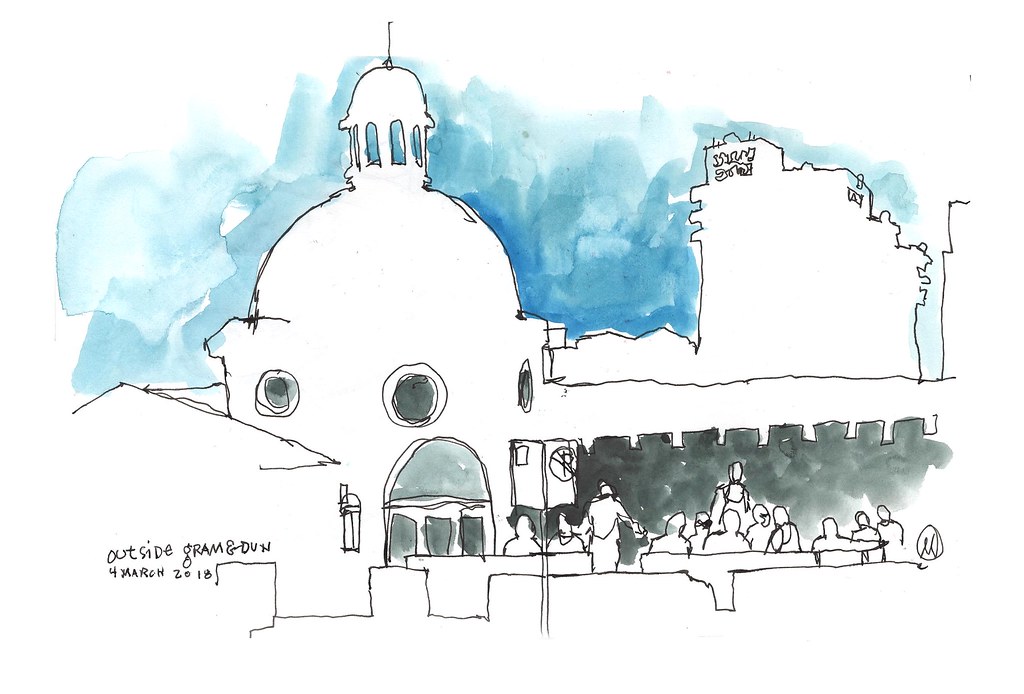 I also appreciate how well this approach reinforces my personal goal to simplify, simplify, simplify. Focus on the line and shape breaks my compositions down into only those most important elements that define a scene. And from there I feel that the viewer can more easily take it upon herself to ponder what story is being told. 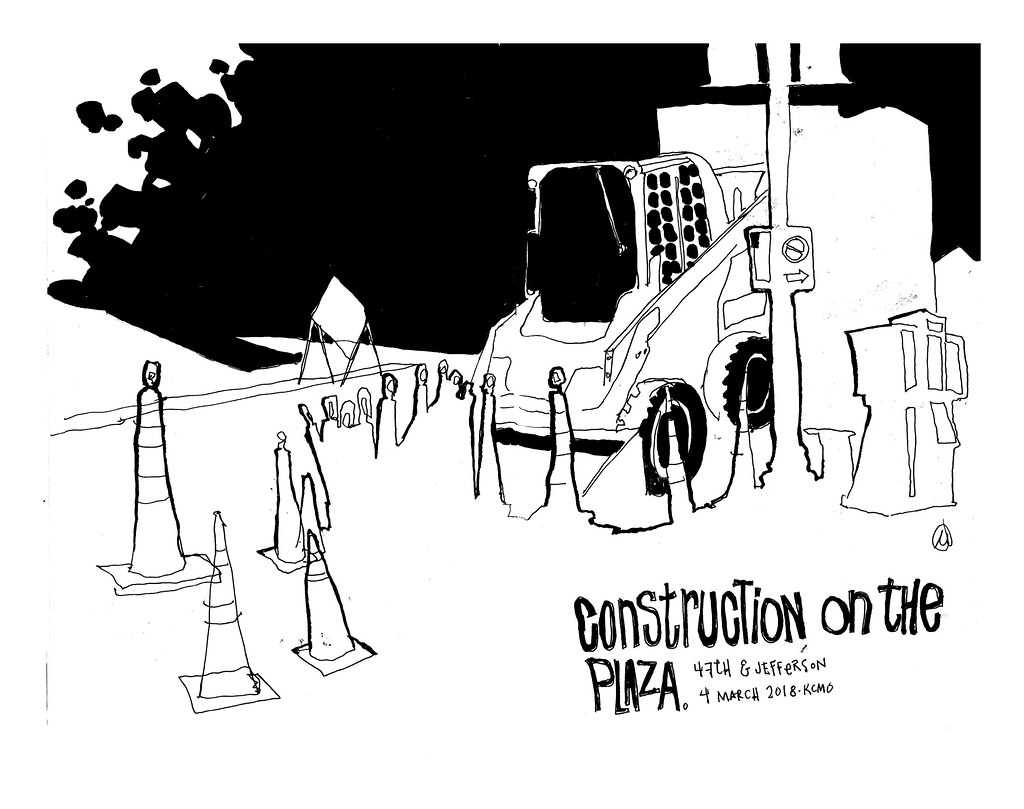 I extended the approach to a closer up view of some road construction. Once upon a time I read that Andrew Wyeth considered himself to be something of an abstractionist. Although his paintings look very “real,” he leaves out much that would have been observable, simplifying the elements of his composition and thus thinking in larger “shapes.” It’s a lesson I try not to take for granted. Leaving out things is just as much an artistic decision as is what to include. 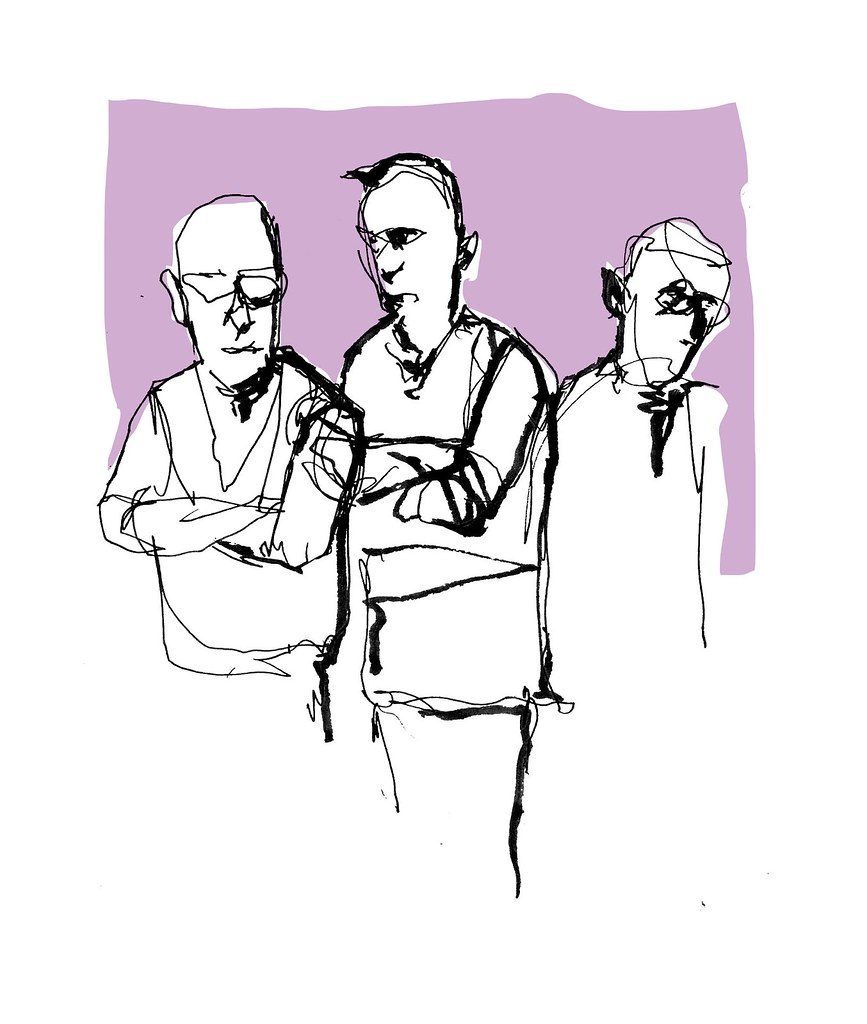 The morning was wrapped up with this quick sketch of a small group of guys, leaning against a wall, arms folded across their chests in a “guy-like” conversation. They looked bored and patient and I wondered if they were waiting on partners who were in the adjacent store, shopping. Whatever the story might be, there’s definitely a story here.

Today’s tools included a water brush, Uni-Ball Deluxe pen, touches from a Sailer Fude de Mannen fountain pen when the mood hit me, and watercolor. I sketched in a 5 x 7 Canson 180 sketchbook, and carried more crap than I needed to have done in my backpack. Like a goof, I forgot to carry my pack stool though (it was in my trunk), so I stood to sketch all morning.