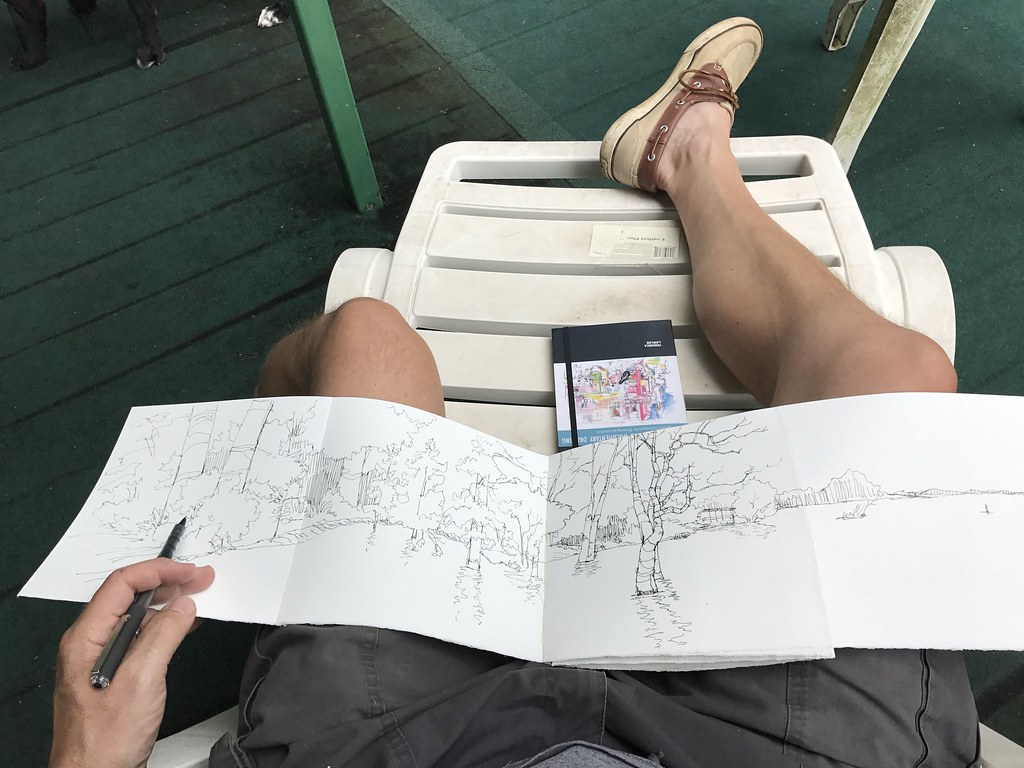 31 May, 2017. Yes, school is out, and this art teacher is ready to relax with a pen in hand! A four-day weekend allowed ample time to simply scribble, much of that while I lounged on a boat dock nestled in amongst a grove of trees. 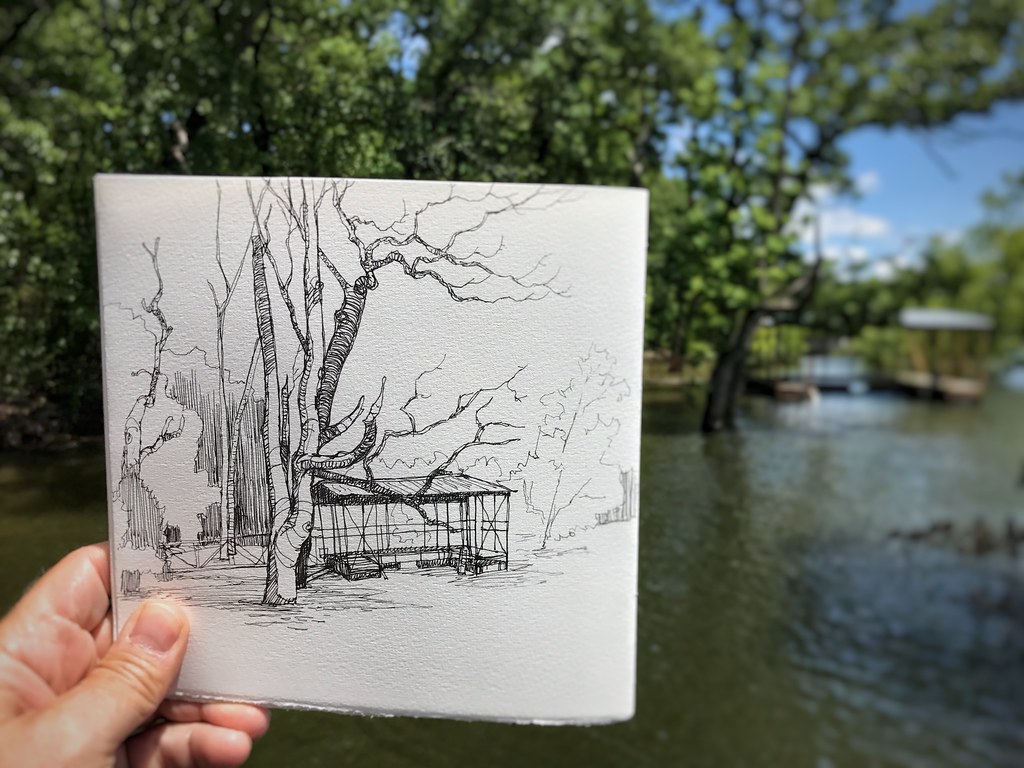 Time passes along at a completely different pace at the lake. I played around with cross contour lines to develop branches that had volume and exhibited a degree of foreshortening. 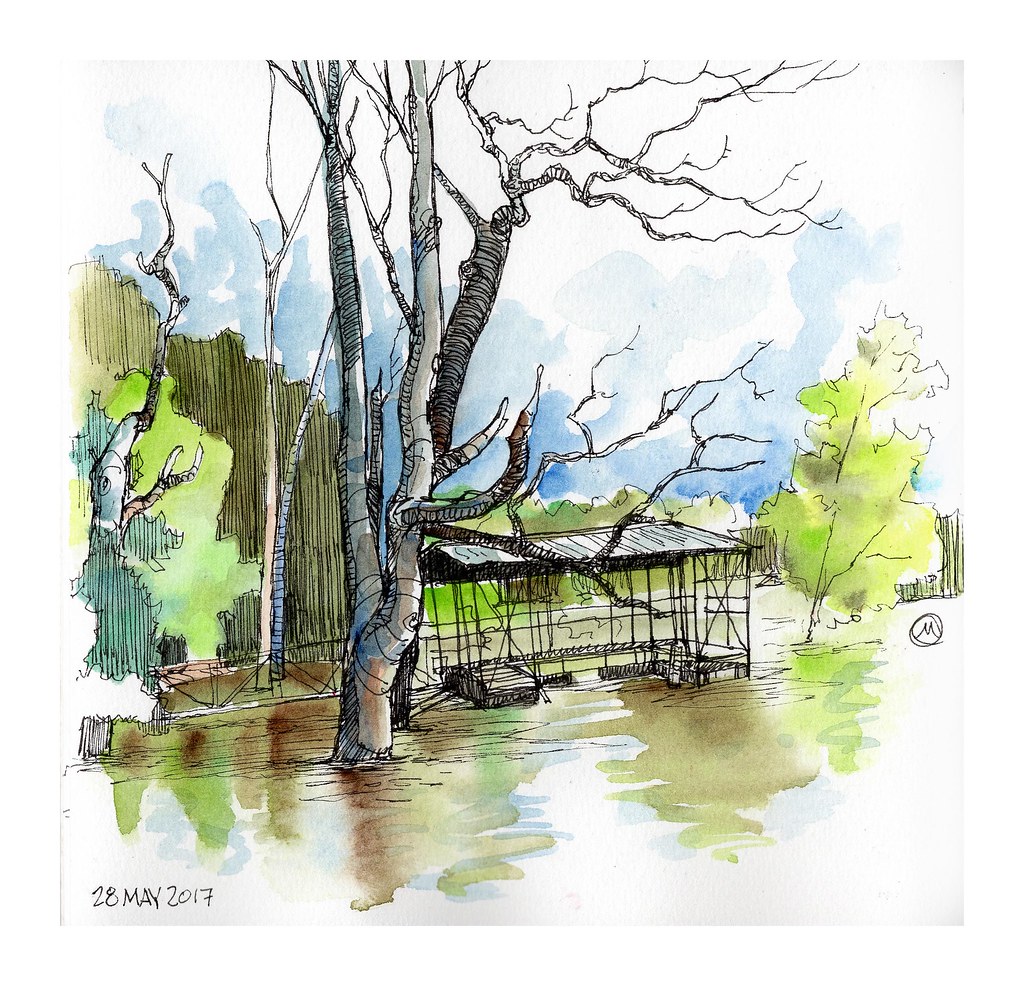 Watercolor might get added in a rather haphazard way. I made no promises to myself about what a sketch might turn out like, set no goals and predicted no outcomes. With no expectations in mind, I found my hours with the sketchbook refreshing. 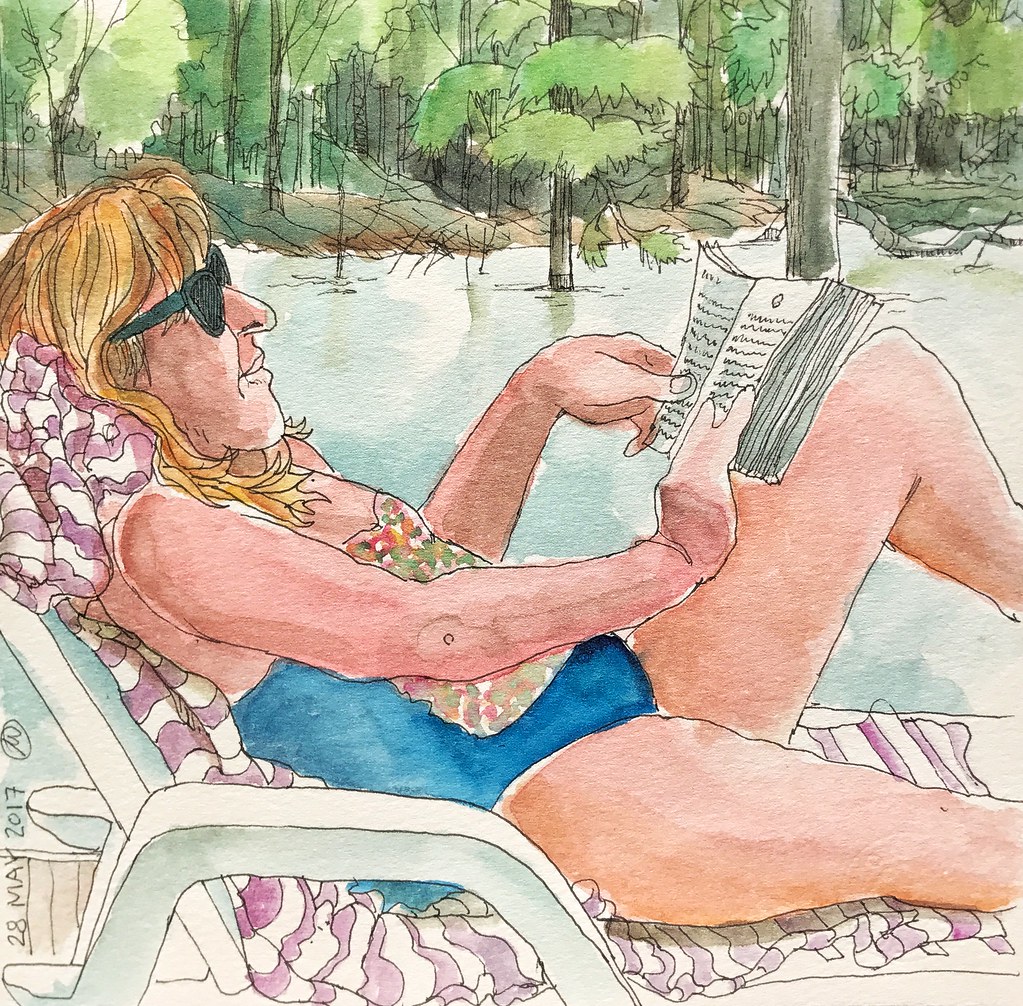 My model was kind enough to sit without moving, turning a page from time to time. Alas! She eventually got up, walked up to the house, and began to rummage through the refrigerator for some cold, refreshing, and liquid libation. I stayed in my lounge chair and added color. 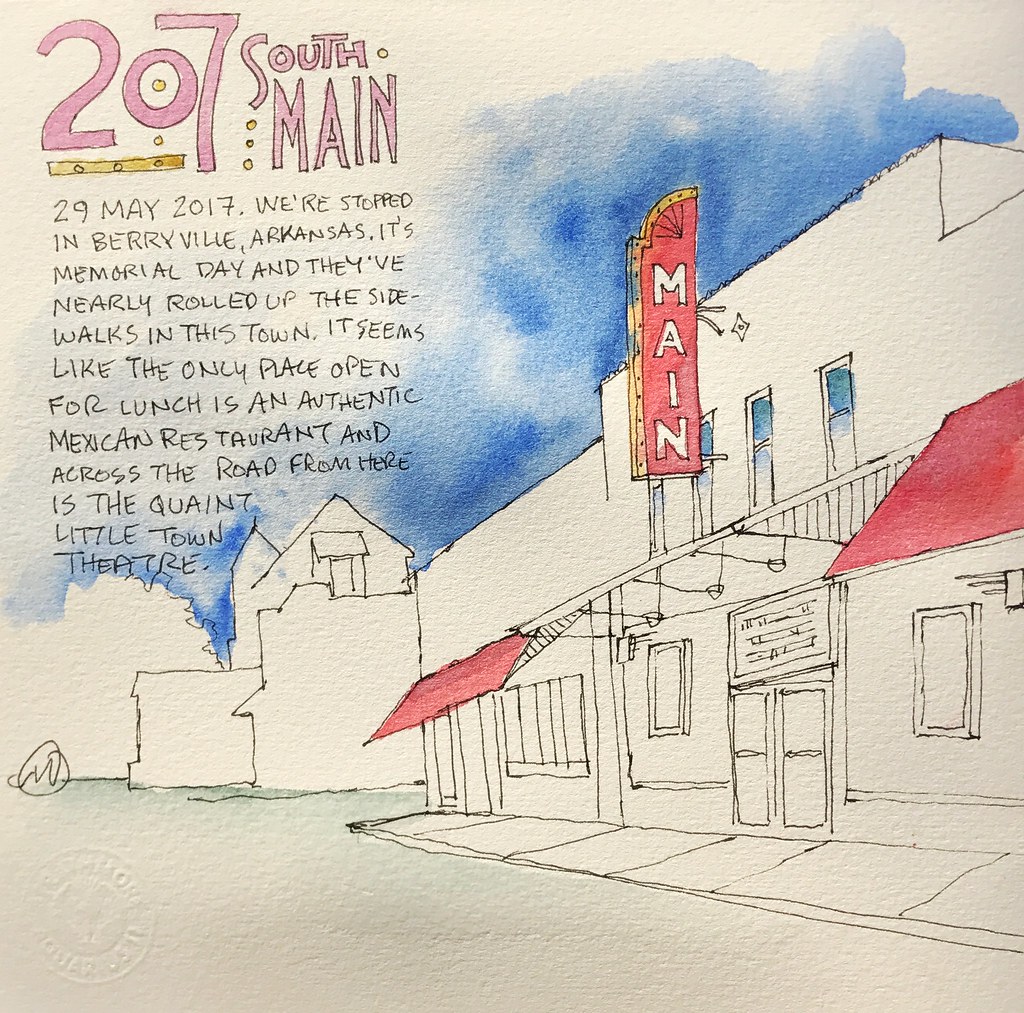 Taking a break from the lake one afternoon, we went out to explore some of the small Ozark towns to the south of us, across the border in Arkansas.

This act of exploration had me comparing one locale to another, and my sketchbook seemed like a good way to record my impressions along the way. 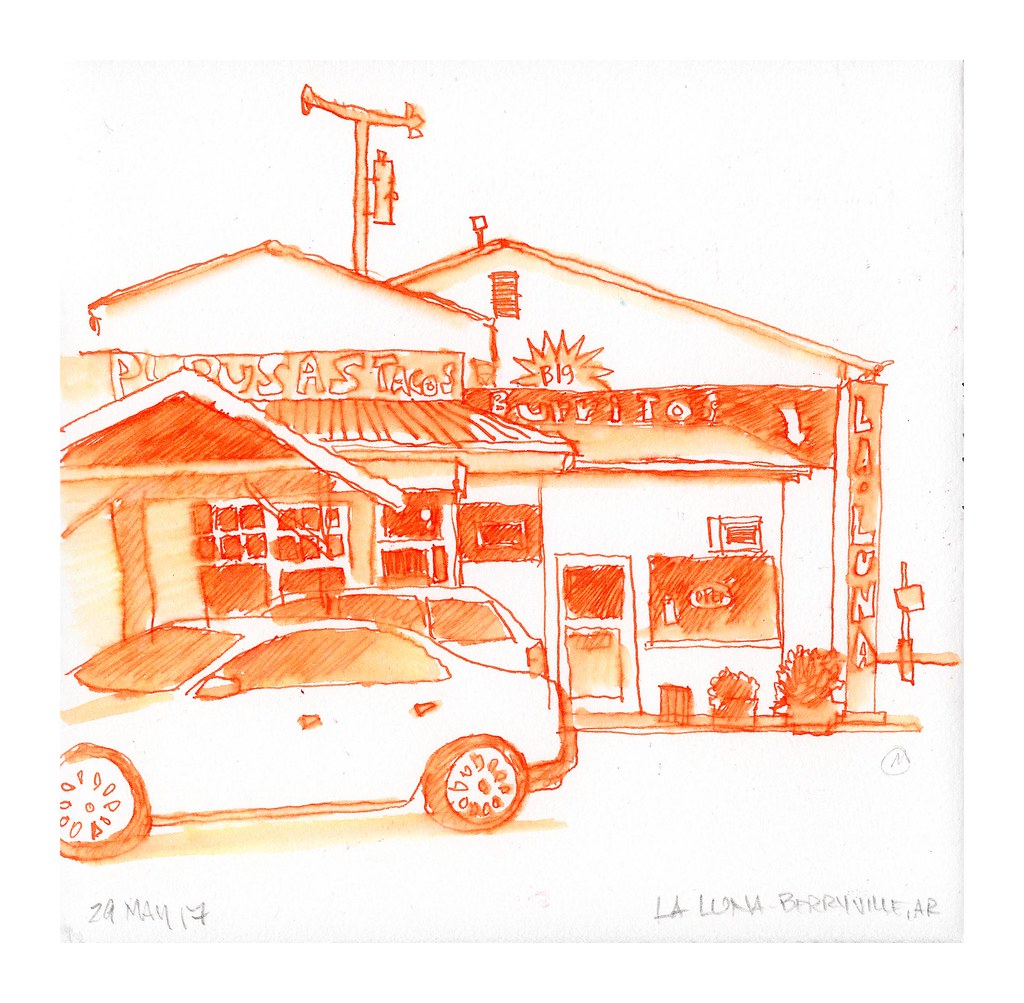 While far from convenient, from time to time I experiment with a dip pen. I saved an uninked sketch so I could test out a new ink I’m curious about. While it’s not permanent, it’s also not as readily reactivated with brush and wash as a Pilot Varsity pen is. (Unfortunately, that is sort of what I was hoping for.) 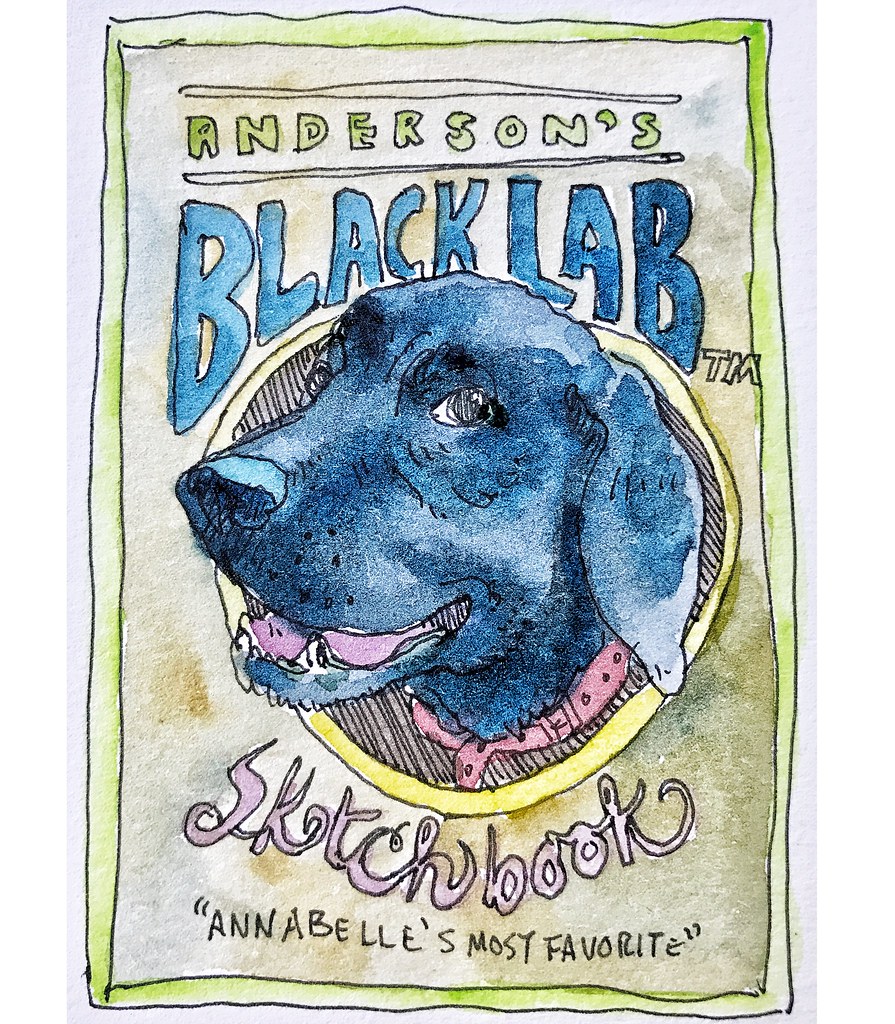 I’m not sure why, but I feel compelled to create some sort of whimsical cover design for each of my sketchbooks. Annabelle was conveniently at hand to act as a model for this cover. 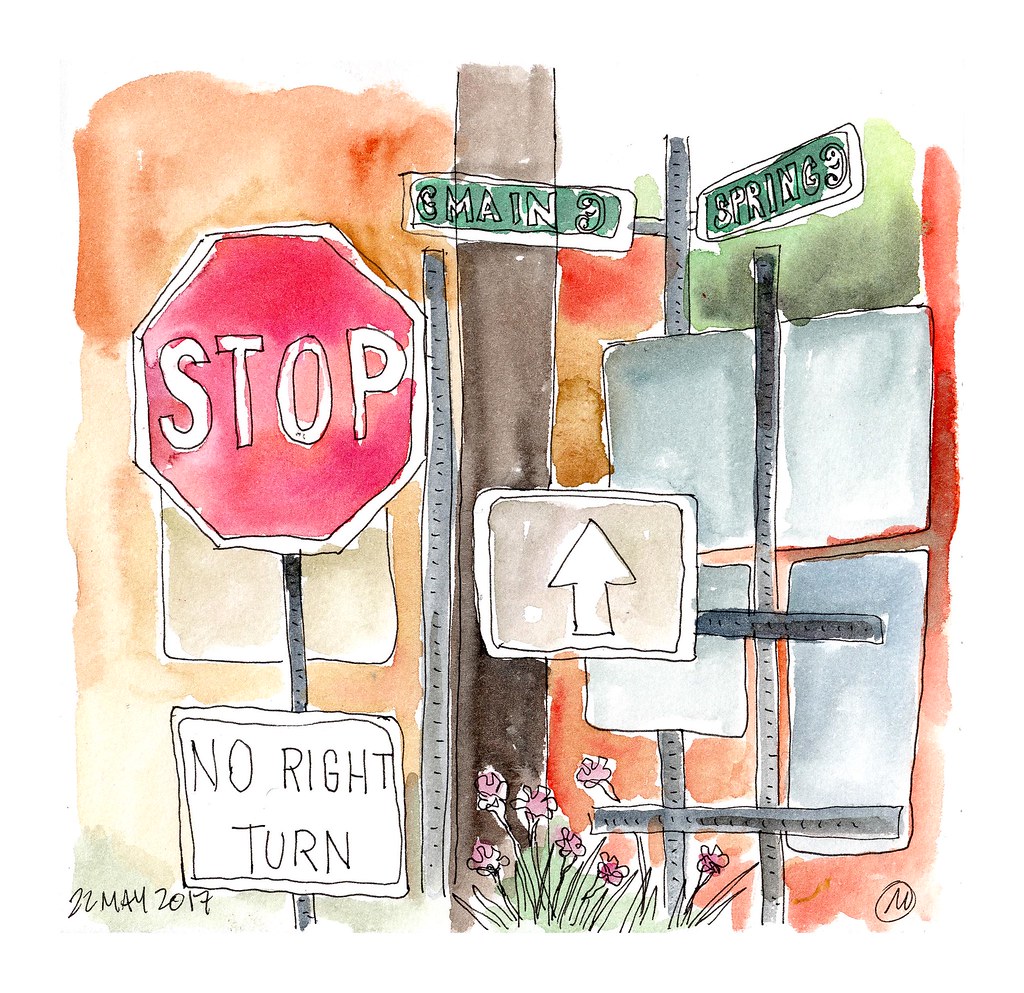 22 May, 2017. Signs, signs – everywhere the signs! Blockin’ out the scenery, breakin’ my mind. So, it’s been catch as catch can this week, grabbing sketches wherever and whenever, and not really getting a chance to do any sort of sitting around absorbing the place. It’s not my favorite approach, but sometimes it yields a bit of gold. This tightly cropped scene of signage captured my attention almost immediately. But of course I only had a couple minutes to scribble. It was sprinkling, I sketched, I made a quick snapshot to reference for color later. Then I scooted. 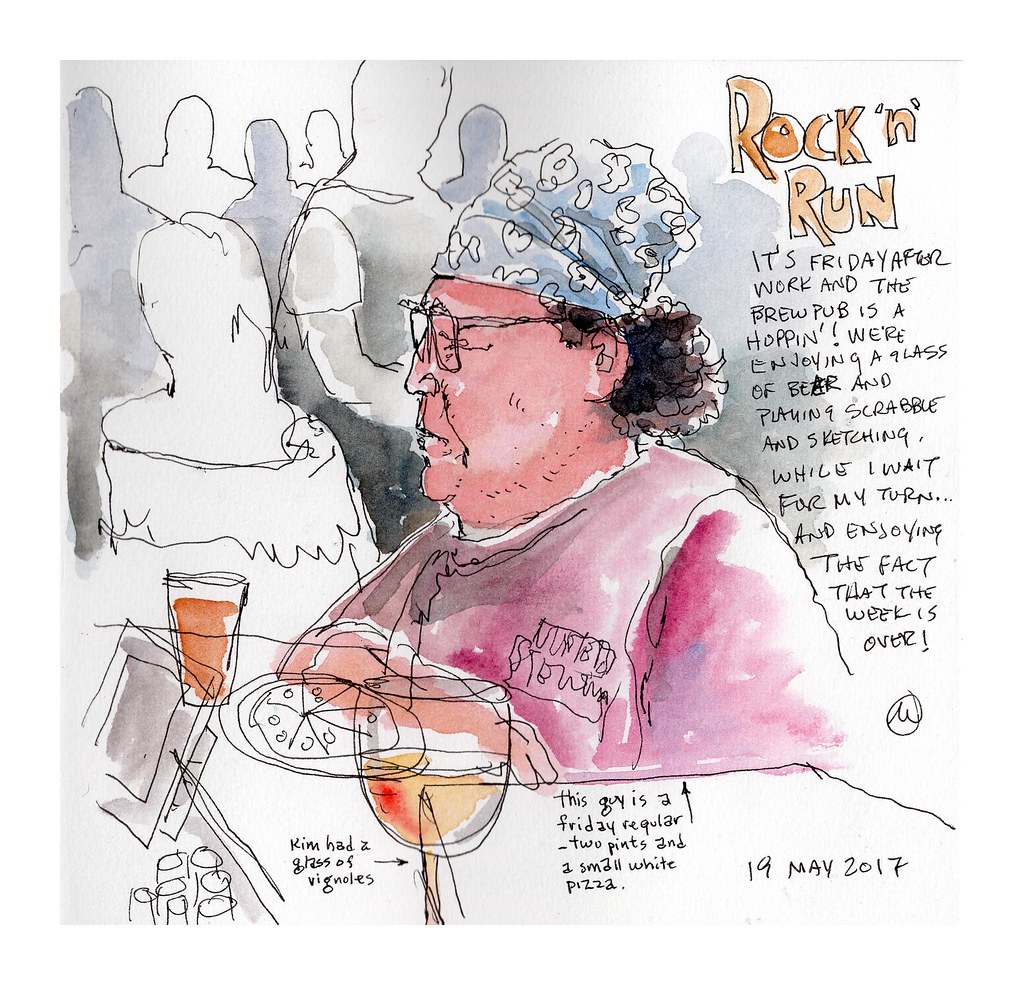 A convivial pub often offers a rich assortment of subjects to draw. It was a Friday night, immediately after work and the local brew pub was hoppin’! A pint of Riley Porter for me, a glass of Vignoles for her, and a game of scrabble at the bar. I sketched while I waited (and waited) for my turn. This particular week was done, and it really couldn’t have ended much sooner. 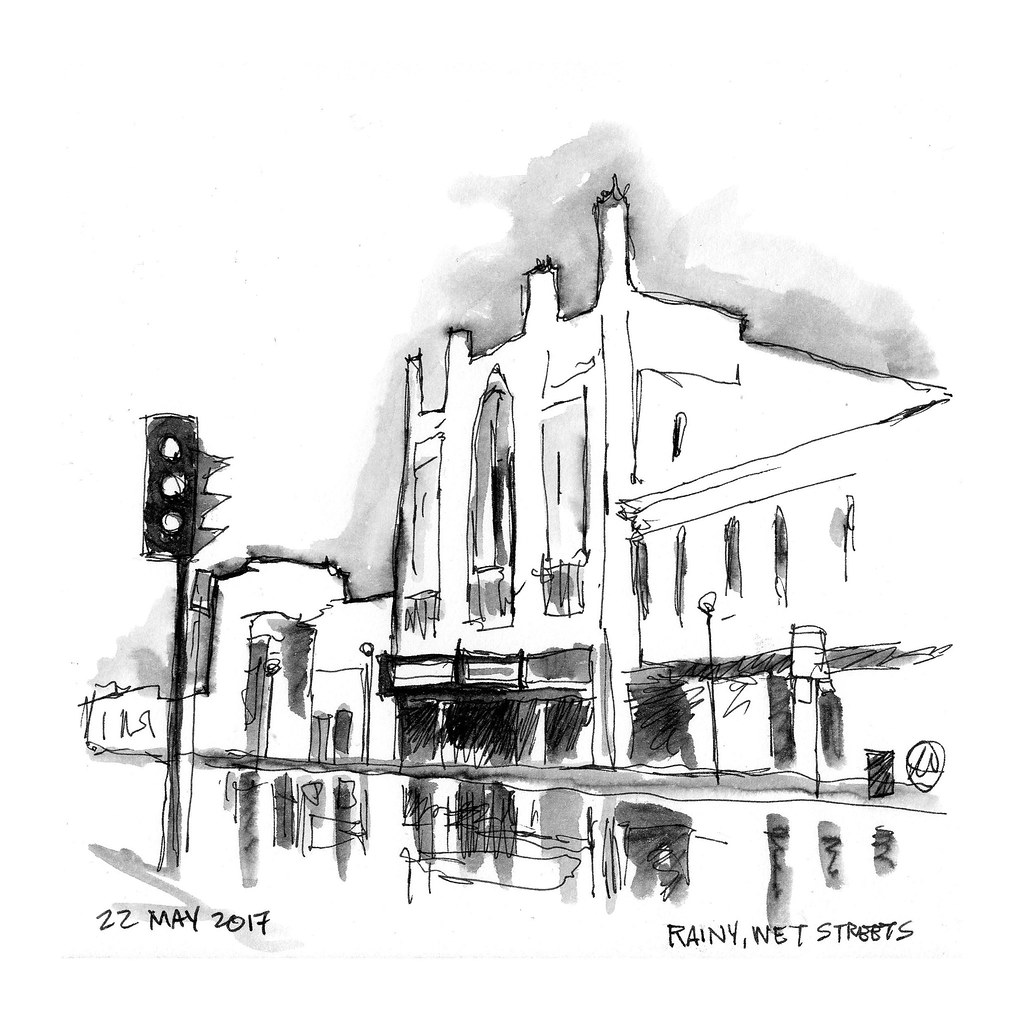 It was a wet day in an older part of the city. Sitting in the front seat of my car, making a really fast sketch, I found myself impatient to “git ‘r done.” Suddenly, I realized what I’d at first thought to be a rather pedestrian subject had captured my artistic interests. I focused on creating a silhouette of the structures via line, and got pretty loosey-goosey with the interior details. After working with the Uni-Ball to draft the main (and rather sparse) details, I went back in with a Pilot Varsity and a water brush to add some depth and tonality. 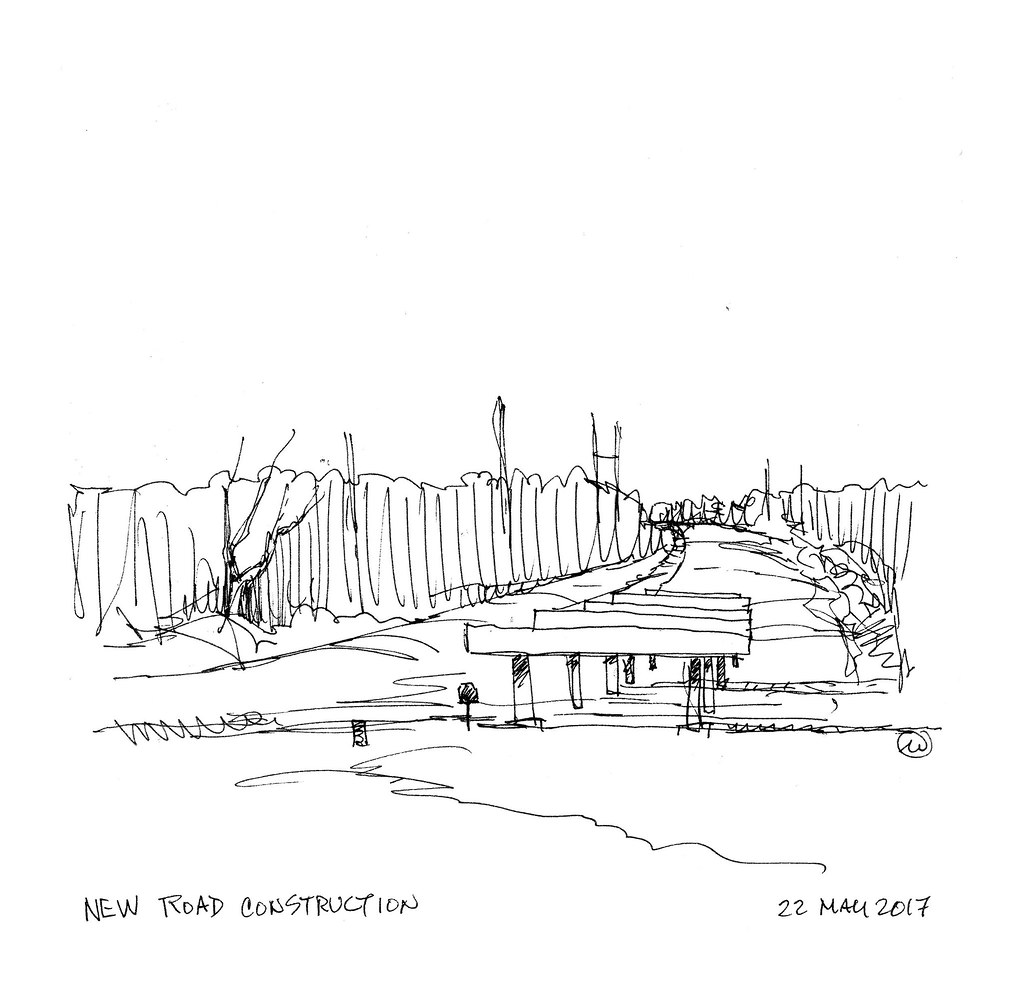 So strange to ride through what was once simple countryside, only to discover a new multi-lane thoroughfare going in, connecting the town proper to – what? Another highway? The hand of mankind rips another swath of trees from the planet. (Uni-Ball Vision Micro on Strathmore Aquarius II, approximately 7 x 7 inches.)

21 May, 2017. This is a pretty simple folded pamphlet – avoid the temptation to overthink things if you try it out for yourself!

So rather than buying sketch books, I make my own sketching “pamphlets.” These are lightweight, hand-constructed booklets that allow me to carry a thin, high quality, easy to carry sketching surface.

I begin with a standard 22 x 30 sheet of good quality watercolor paper. My favorite sheet for this purpose is Strathmore Aquarius II, which is very lightweight, relatively speaking, but doesn’t wrinkle or bow when you add washes of water and paint.

I’ll divide the sheet into four equal horizontal strips that measure approximately 7.5 x 22 inches. To keep from bulking up, I will only use three strips of paper for each booklet. Folding each in half to a 7.5 x 11 size, I’ll carefully crease the pages with a printer’s folding bone or a brayer. Sandwiching the three sheets together, I’ll then carefully stitch the centers together. At this point I will have an 11 x 7.5 inch book fold pamphlet. By carefully folding each 11 inch panel toward the center gutter, I will wind up with a double gatefold pamphlet. Although I refer to these as 5 x 7 booklets, it will actually measure closer to 5.5 x 7.5 inches. 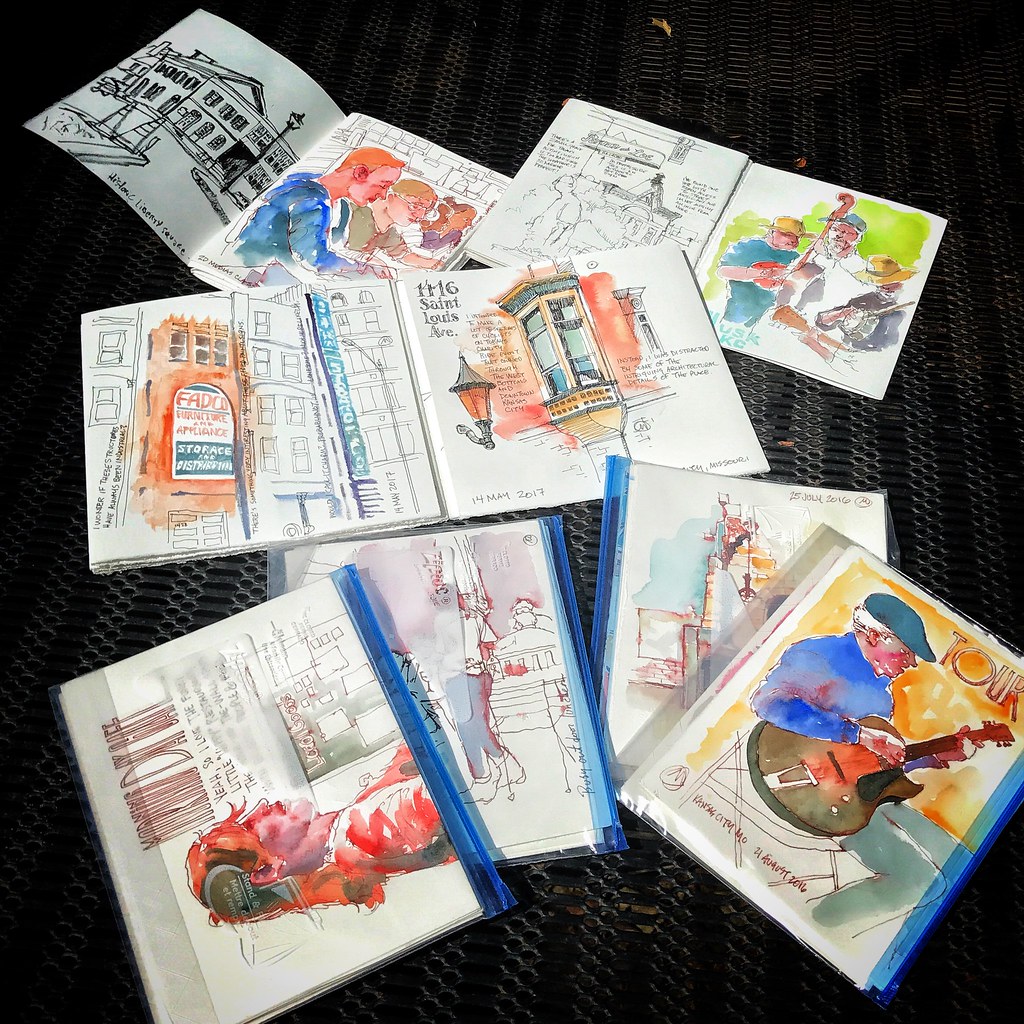 15 May, 2017. Who needs sketchbooks? I make my own double gatefold sketching “pamphlets” out of my favorite watercolor paper.

Ever since I began experimenting with my own sketching media, I’ve toyed around with folding sequences and sizes. I want the size to be easily carried without being a burden or inconvenient. And I knew I wanted to have the flexibility to draw on a single panel, two panels, or to expand out into a truly panoramic motif. After several promising attempts, I’ve begun to use a double gatefold, which is easy to cut and fold, and provides me with the flexibility I hoped for. 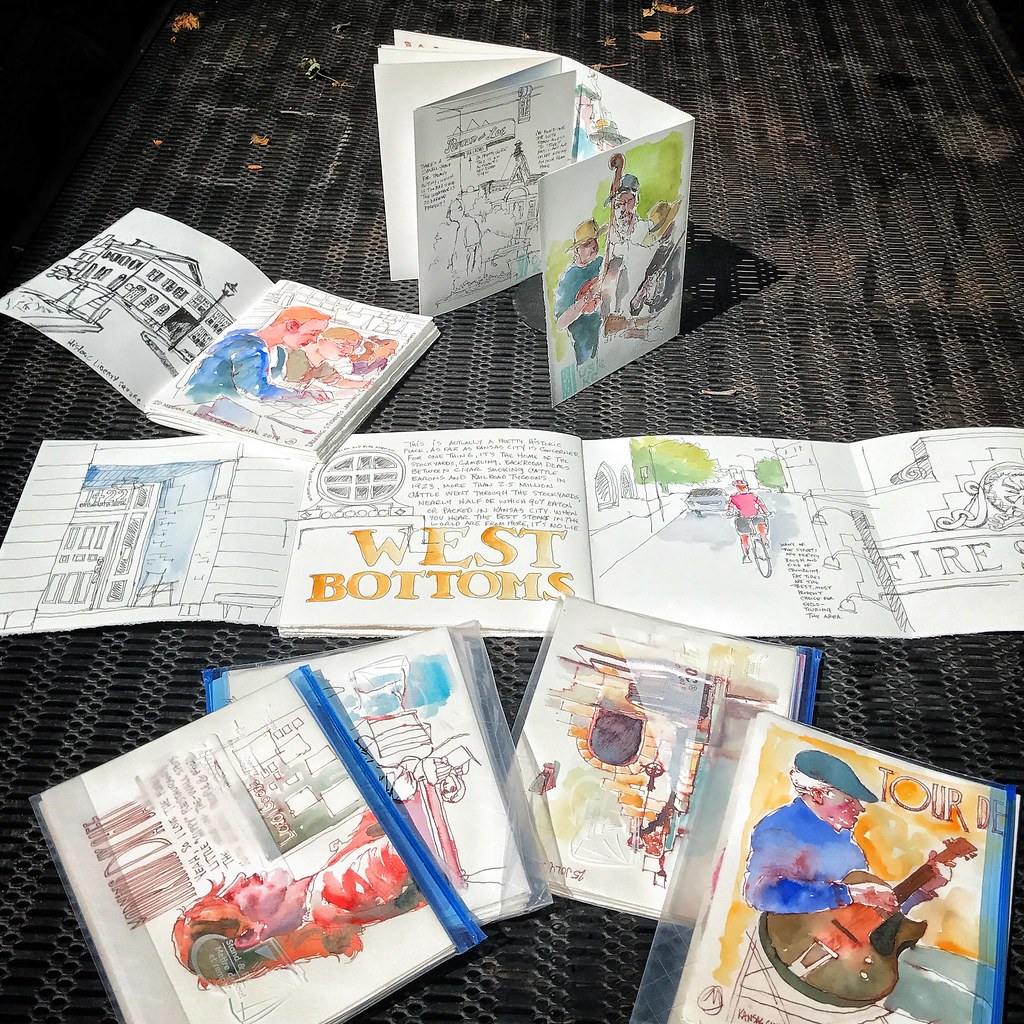 Notice how the sketching pamphlet in the center (above) is unfolded to reveal a very long and horizontal canvas on which to scribble. My pamphlets are small enough that I can simply tuck one into a pocket or – in a pinch – between my back and the waist band of my hiking shorts. Yet there is enough paper to provide adequate thickness so that I can draw without the whole shebang seeming floppy-floppy. Meanwhile, I can unfold the pages if I wish, and use the entire width as a drawing surface. 6 May, 2017. Our local group of likeminded sketching, plein air, and doodling artists met to draw at the City Market this weekend. The place, normally bustling on a Saturday morning, was especially so on this day. The crowds of shoppers were teeming, the birds were in song, a light breeze played over the pavement and stalls of fruits and vegetables. Even the normally vacant spaces were occupied by additional sellers and street performers.

I was drawn to a quartet of older gentlemen playing stringed instruments and performing American folk music – Woody Guthrie, Pete Segar, and many others. From what I gathered, they’re not a “group,” per se. Individually, they play with other, more organized groups of musicians but thought it would be a hoot to play together on this morning. And what a treat it was that they decided to do so – they were wonderful! After standing and sketching them for a while, I eventually wandered over to a nearby park bench and claimed my stake so that I could draw and listen to their set. My objective was to keep it simple, keep it loose, and really shoot for the “less is more” approach. Sometimes it takes me several pages to loosen up and shake the tight-ass scrawls, and this was to be the case today as well. In fact, the sketch above was my last of the morning. After having drawn the same guys several times, I finally got to the point that I “knew” my subject and could design the sketch. I really like how the black and white turned out, and I’m especially pleased to have remembered to get a good image of it before adding loose patches of watercolor wash. In almost every way, the color is there to create a more holistic image: there’s a bit of “push/pull” taking place in the interaction between cools and warms, and the placement of color and value helps to direct the eye in a circular motion, reinforcing what was begun with the linear composition. Really. Is there anything more joyful sounding than the plucking of a banjo? And is there any musical instrument that can go from such joy to such intense melancholy in but the briefest of moments? From my park bench seat, my view took in outside dining, architecture and a variety of architectural details, people shopping, performers performing, and sellers selling. In keeping with the idea of simplicity, I began this outdoor dining sketch by focusing on the silhouette “line” of people and objects that cuts through the bottom center horizon. Notice that it’s (mostly) a single, uninterrupted line. This is a great architectural exercise that I find works to tease out the most important elements of a skyline, or even a landscape. Turns out that it works well for people too – at least in this case. I really love it when a sketch gets distilled down into the barest minimum of essential elements, and for that reason alone I find myself incredibly happy with where this one wound up – not to mention the enjoyment of the process/path I took to get there. Once the sketch began, the rest was intuitive. It’s at such times, when using the pen is like riding a bicycle, that I’m often at my most content. This was intended to be a long weekend of getting outside, touring through several small towns to explore turn-of-the-century/Fin de siècle architecture. Instead, I was rained in for nearly the entire three days, with only the briefest of respites. Stuck in Arkansas because flash flooding closed – literally! – all of the roads leading back into Missouri, I managed to get out of my hotel in Eureka Springs with a sketchbook and pens between cloud bursts. Sheltering under a couple of awnings, SOME of what I’d planned to sketch got scribbled on paper. However, I had some pages that got ruined when sudden downpours came out of nowhere, and I was myself drenched to the bone. The rain was incredible, by the way. At times the middle of the day was as dark as night. In Berryville, Arkansas, what had been a low lying area transformed into a raging river, at least 300 feet across. Roads were entirely submerged, and road block warning signs urging motorists not to proceed any further could be seen hundreds of feet away, barely visible and barely above water. Oh…and my credit card got compromised, so Shazam cut it off Saturday morning. No problem, I thought. I have actual money at the lake house back in Missouri…

Sketching – even as a waterlogged exercise – was my catharsis.