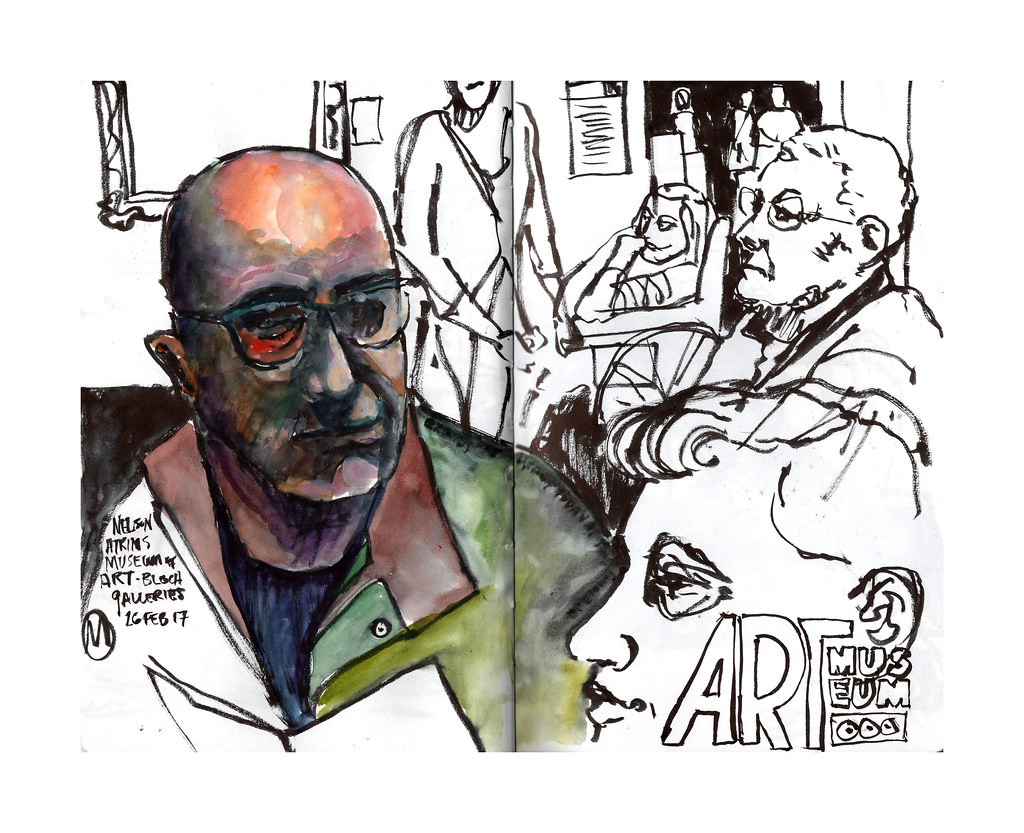 26 February, 2017. The Bloch Galleries have reopened at the Nelson-Atkins Museum of Art, and no I wasn’t hiding my brush pen from the museum guards and avoiding eye contact with docents during the inaugural kick off event yesterday. The crowds were out in force, the newly renovated space was packed to the gills, and it was standing room only except in the most out of the way corners. Pencils are, fortunately, not frowned on in the museum. So in addition to enjoying the absolutely incredible lighting, the rooms dominated by the color of the artworks, and a handful of excellent pastries, I elected to capture some of the contemplative moments of this event.

The color, of course, was added later on. I used gouache, a media I’ve been toying with in my sketchbook from time to time recently. I’ve always enjoyed using water media to reactivate drawn lines. This is taking things a step further by taking the melted ink of the wetted line and allowing it to wash into the painted layers of color. It’s interesting that this media allows me to “correct” proportions and solidify forms that reminds me a bit of carving paint in oils. Looks nothing at all like oil paint though. 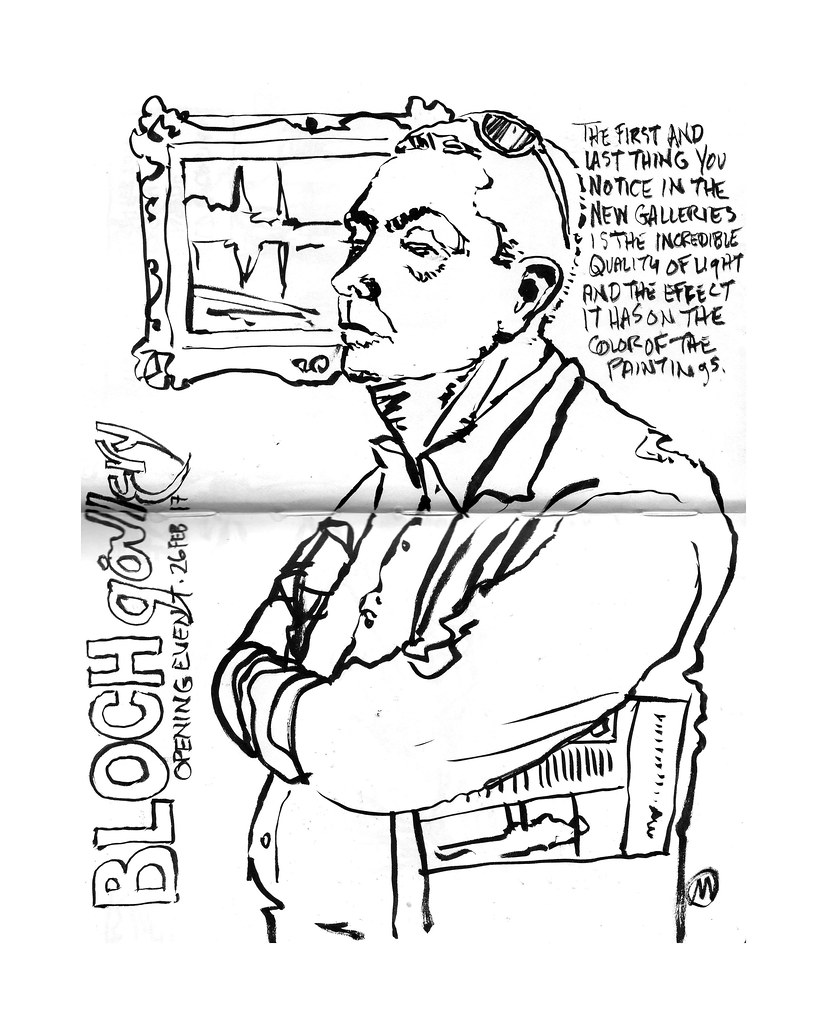 I was pleased to quickly capture the pose and attitude of this museum visitor. Sometimes the likeness and attitude just seems to flow. (And sometimes things don’t work out so nicely – a couple of my other sketches wound up stiff and disproportionate.) 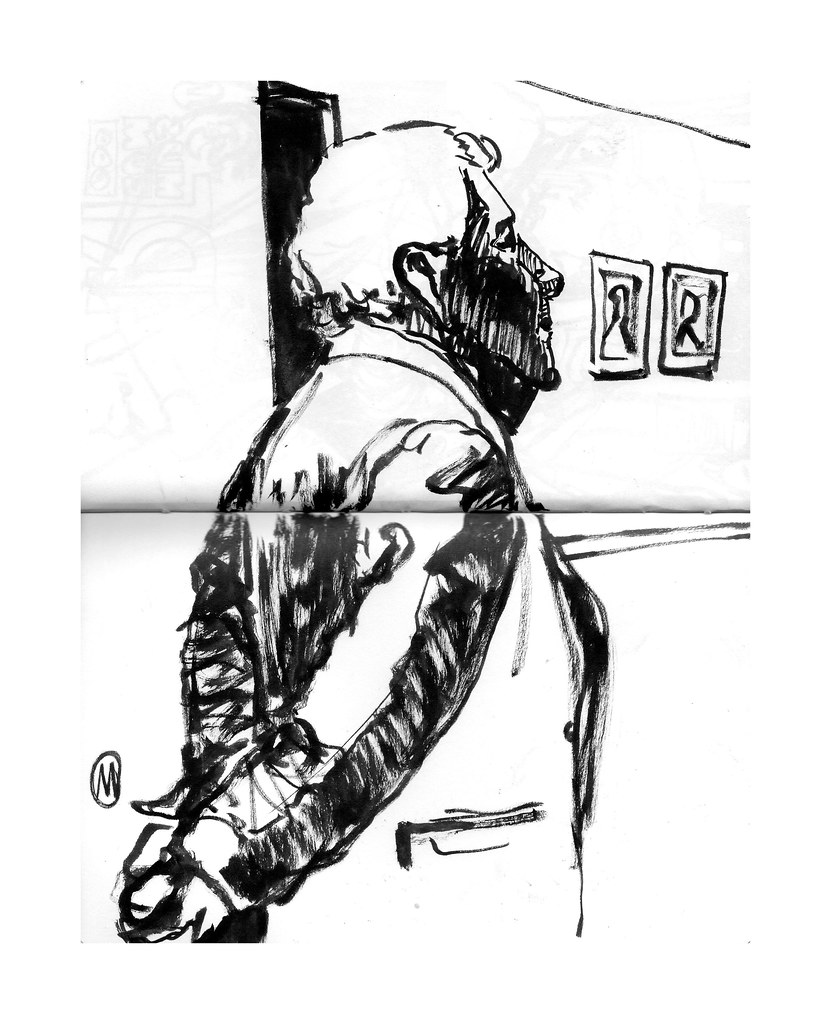 I said I wasn’t hiding my pen from museum guards, but I was stalking one. This fellow seemed to know he was being observed and kept turning his back to me, so that’s what I sketched. (Kuretake No. 40 brush pen, gouache, in Canson 180 sketchbook.) 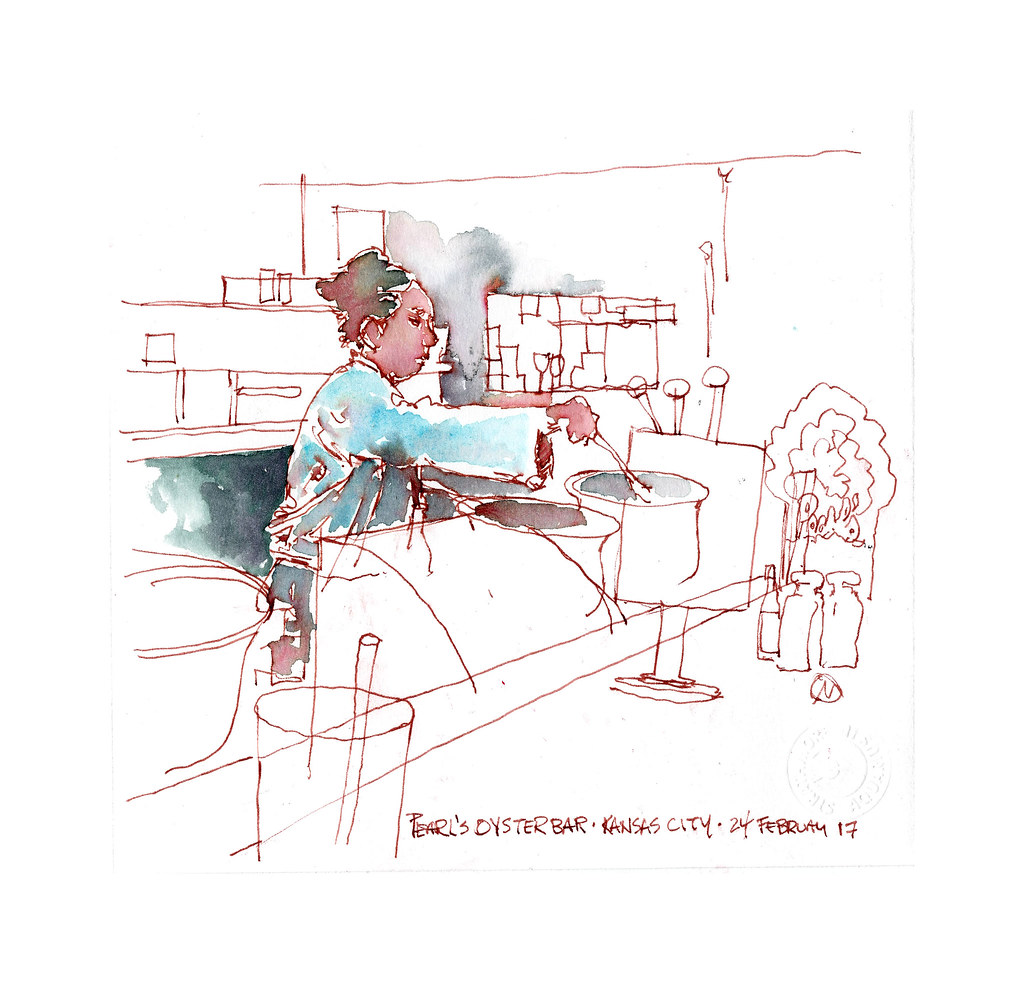 24 February, 2017. The only reason we found ourselves at a casino in the first place is because I wanted oysters for dinner and Pearl’s is relatively nearby. Pearl’s is a good choice, quiet and friendly – and I have a good view of everything in the prep area from a comfortable seat at the bar.

Food, beverage, and sketchbook are a good fit for me. I find it relaxing to sit at a countertop in particular, soaking up the atmosphere around me and scribbling at my leisure. A convivial attitude goes a long way, and I don’t mind escaping from the hustle bustle and elbow throwing crowds. A little background jazz thrown in for good measure wouldn’t hurt either!

I hadn’t sketched with my Lamy Safari in a while, so this was an opportunity to work loosely. (The color was added later.) It’s always startling to me just how markedly different two tools, both of which are called “pens”, can be in practice. I find the loose, casual linearity easy to achieve with a Lamy fountain pen, while the marks of a brush pen tend to be made much more deliberately. The cruder line quality can be used to great effect if one is willing to allow a more graphic style to emerge, as in my second sketch below. 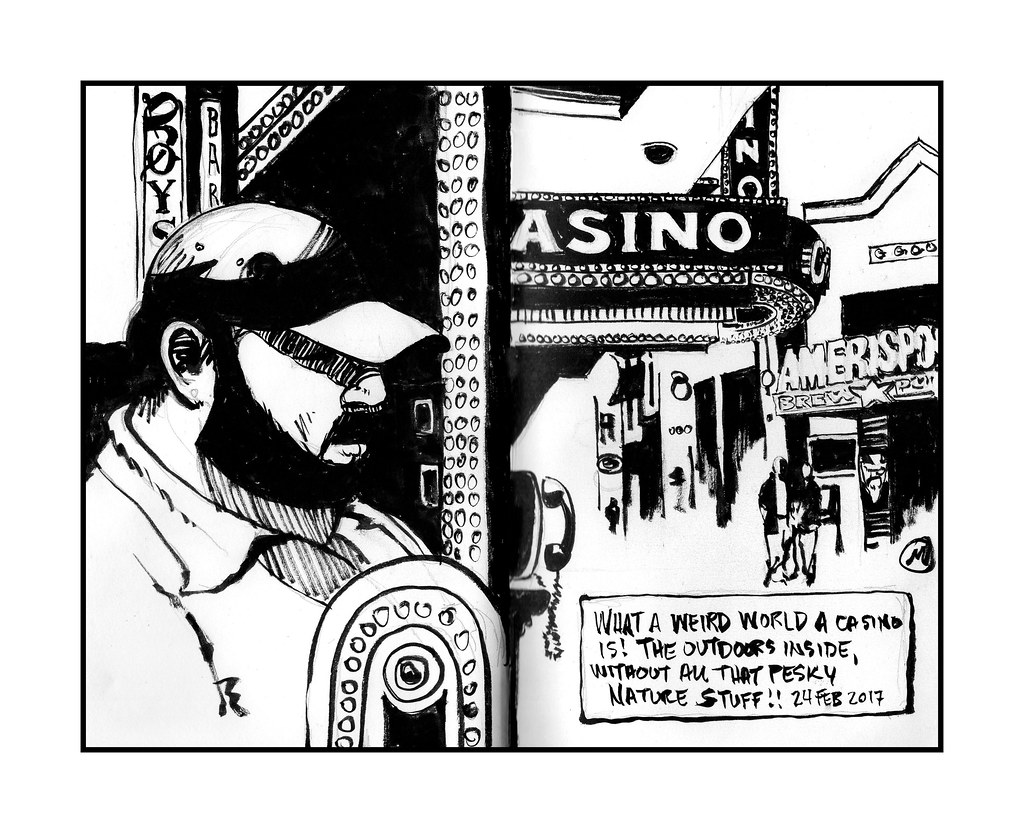 Casinos are just plain weird to me. They create this entire world that appears to be a town or a street or some other place that is outdoors – entirely indoors. All the benefits of being outside without all that pesky nature and fresh air…

As you can probably tell, I’m not a big fan of the places. Everyone seems to have a walking attitude of quiet desperation. While my wife played at the tables for a few minutes after dinner, I sat on a bench along the “street” and sketched, amusing several passersby. I didn’t start out with the intention of creating some sort of film noire look, but the brush pen and black ink and the place itself just sort of conspired to make it so. (Kuretake No. 40 brush pen in Canson 180 sketchbook) 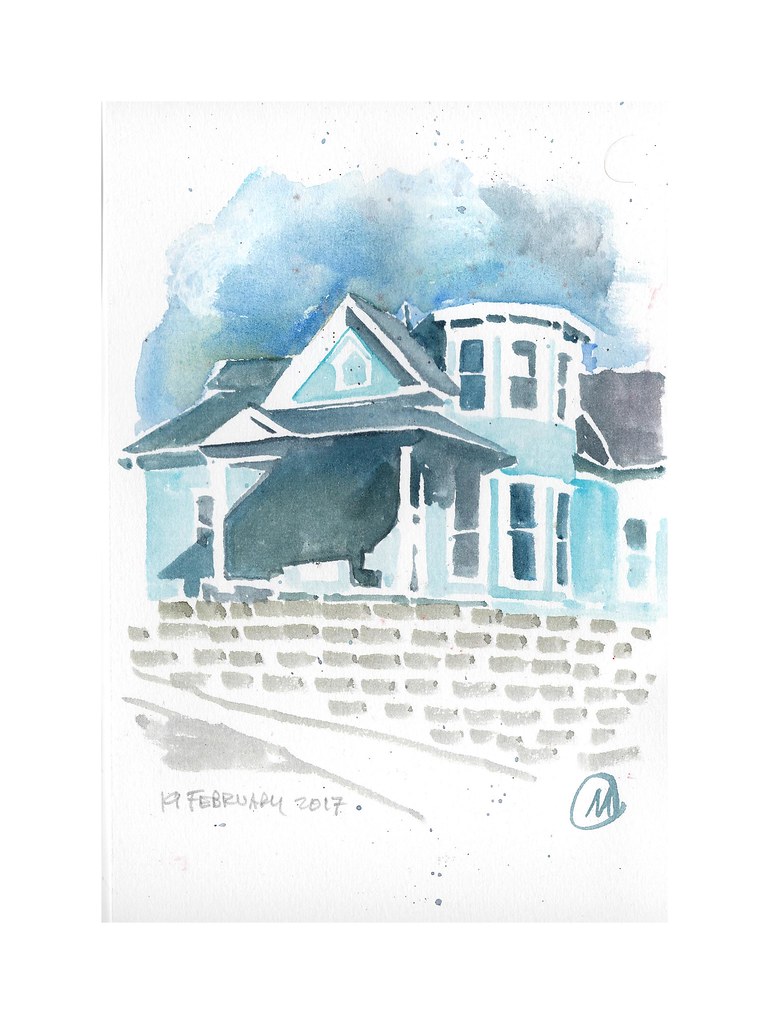 19 February, 2017. In watercolor I often search for that elusive, restrained quality – hoping to leave out as much detail as possible, yet still render a convincing and believable image. I felt it almost immediately with this little 9 x 7 inch sketch, starting with the main triangular form immediately above the front porch as I quickly and loosely slopped down the pale cerulean blue wash, leaving pure white to define the negative shapes. Then I moved on to the big shadow area under the porch, which was what caught my attention in the first place. I just wanted to paint the shadow, accurate to a level of believability, but without extraneous detail. And to be honest, I was pretty excited when it worked. In real life, these colors are kind of bland, but the limited palette of blues, complimented only with very slight mixtures of yellow ochre are quite pleasing to my eye. 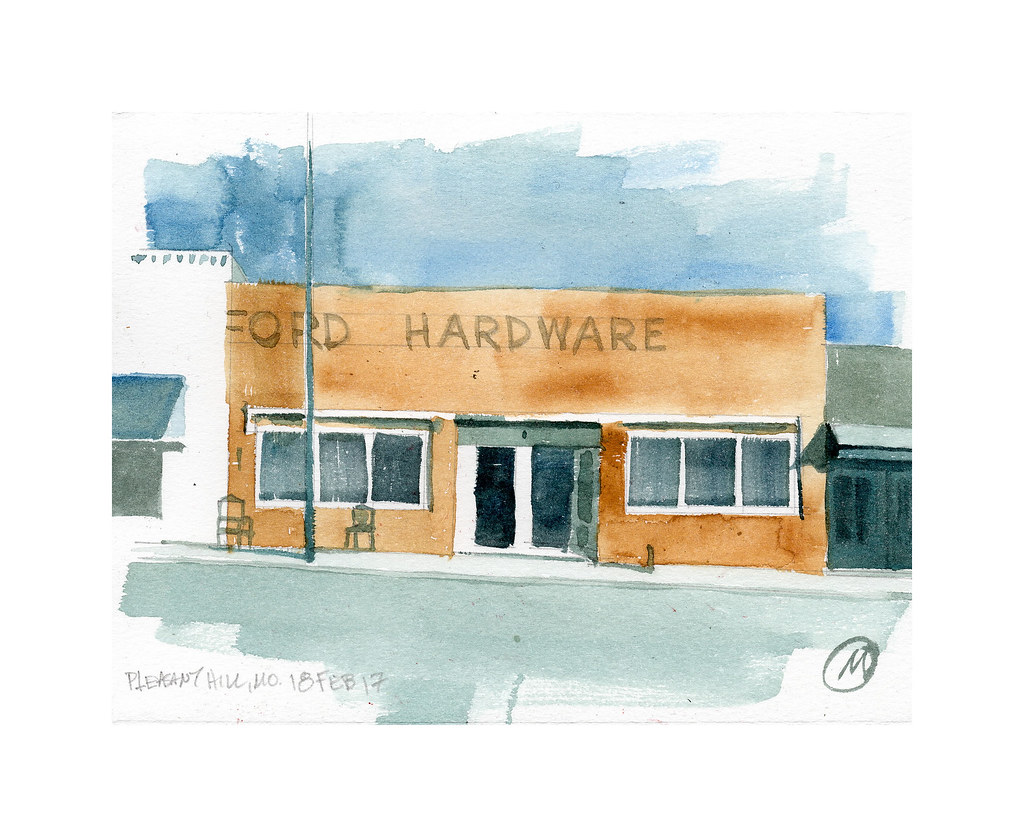 This little 5 x 7 inch sketch also felt restrained – surprising, in a way, because I used a flat brush for the entire painting. Why surprising? Well, mostly because I almost never use a flat at all. I’m awkward with them. I’m not certain even why I did so, but happy that I did. Possibly, all of the rectangular shapes and flat colors informed my decision. 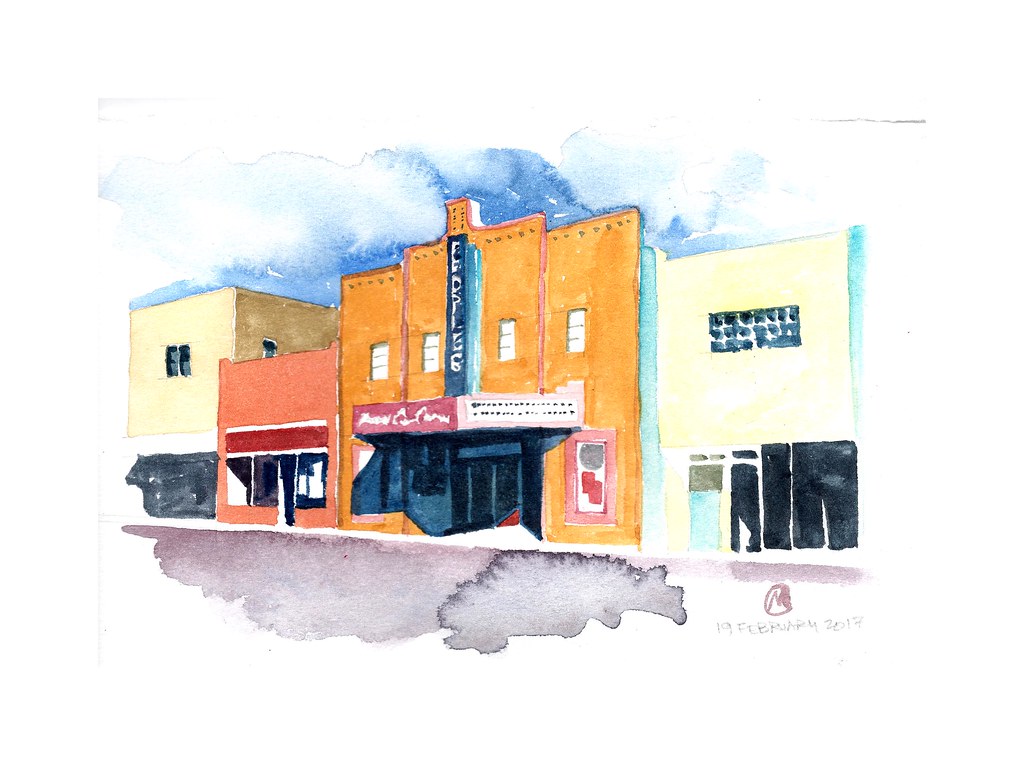 This 5 x 7 inch sketch almost feels overworked, and presents more detail than in the previous two. I always enjoy finding ways to loosen things up with blooms, as happens in the pavement foreground here. But the orange theatre almost comes off looking like gouache, the yellow ochre blend coming off a bit opaque. Still, the shadow feels about right, and in addition to that Art Deco sign, rendering the shadow convincingly was my goal.

All sketches were made with a limited palette, using water brushes on Strathmore Aquarius II watercolor paper.

18 February, 2017. Yesterday was the most incredible February weather I can ever recall. A good chunk of my day was devoted to bicycling a section of the newly opened Rock Island Spur Trail. A Rails-to-Trails initiative that connects the southern most section of the Kansas City area to the Katy Trail, the Rock Island Spur Trail also offers snapshot views of scenes not always obvious or accessible by car. I love to explore and discover new places, especially small towns, “discardia,” and architectural elements. 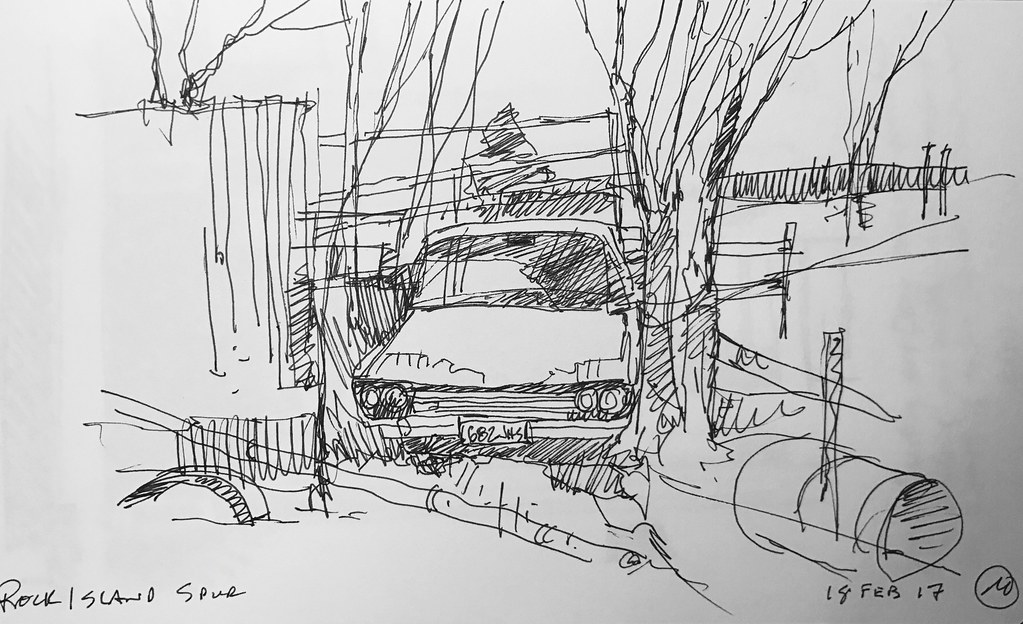 Emerging from a bank of trees, the trail crosses a paved road a few miles along the route out of Pleasant Hill, Missouri. There is an unimproved trail head at this location that abuts a property I imagine to be a “personal” salvage yard. In other words, it doesn’t appear to be a commercial operation; a pungent, thick smoky fire was burning – tires perhaps? – and the land was very overgrown and littered with wrecked and inoperable cars and trucks and other “discardia.” Trees had taken root and sprouted from the midst of literally everything. This 60’s era sedan has an orange New York license plate attached to the front.

I find “discardia” interesting. Such things, whether they be architectural, vehicular, or simply everyday detritus, are signs of human touch – of human impact. There’s history to be found in these artifacts of our existence … but it’s fleeting, because they are quickly disintegrating. As they return to their constituent elements, whatever sights they’ve born witness to are also disappearing. 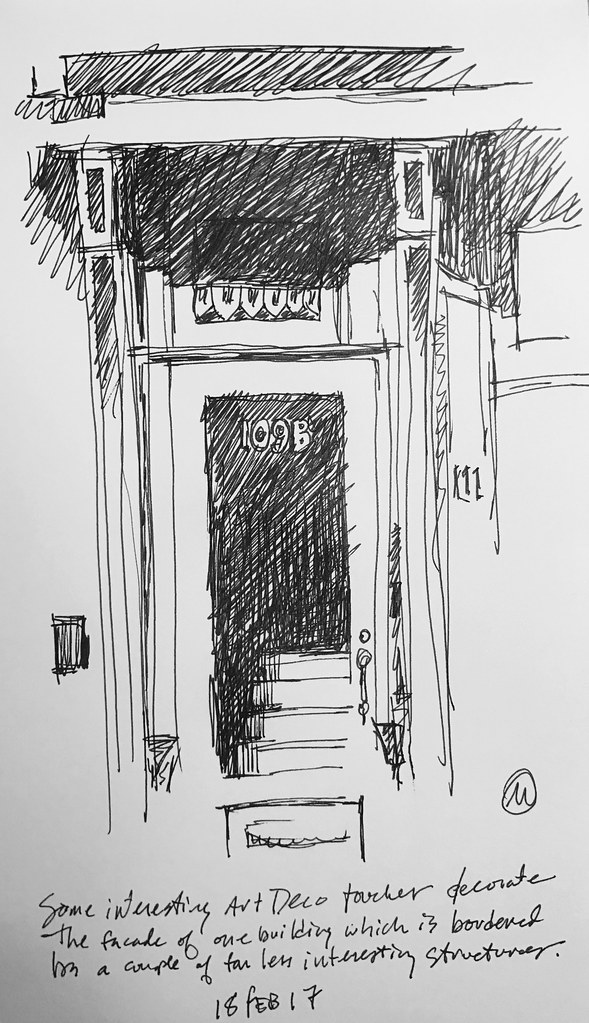 Small towns throughout the Midwest are often an intriguing mishmash of architectural styles, with a few extant examples of Federalist style and Antebellum homes to be found if one searches, along with a smattering of Victorian “Painted Ladies,” Art Nouveau, and – more often than not – cautiously woven together Art Deco elements. Of course, bungalows and later box style structures still are the predominant structures, but they bore me and I choose to ignore them unless there is something unique to pique my curiosity about them. 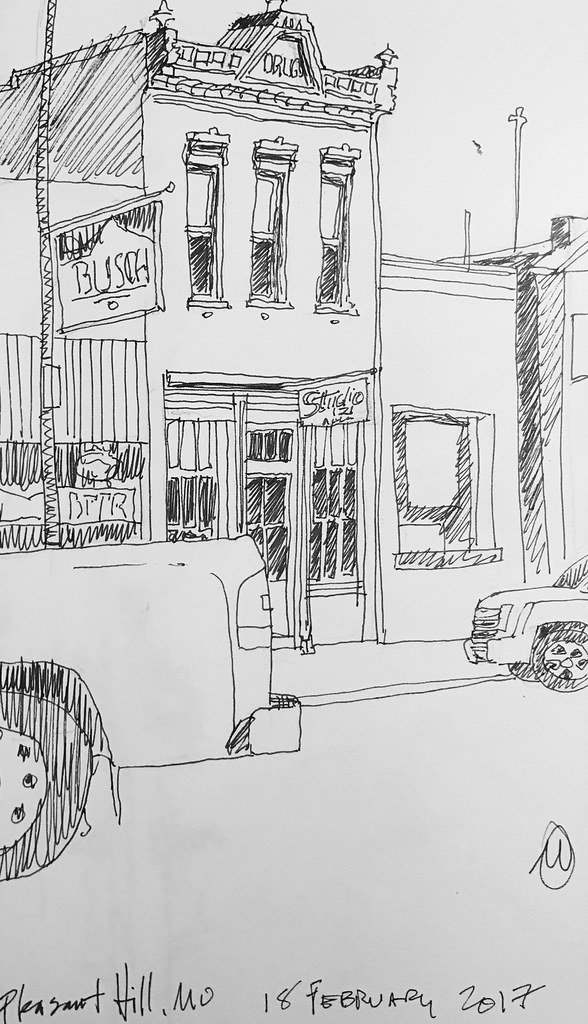 On this particular afternoon, I’ve chosen to carry an even more Spartan kit than usual: a pen and small pad. They seem to suffice as I quickly scribble impressions from time to time, before pedaling off down the trail. (Uni-Ball Deluxe Micro pen in 4 x 5 inch lightweight sketchbook.)