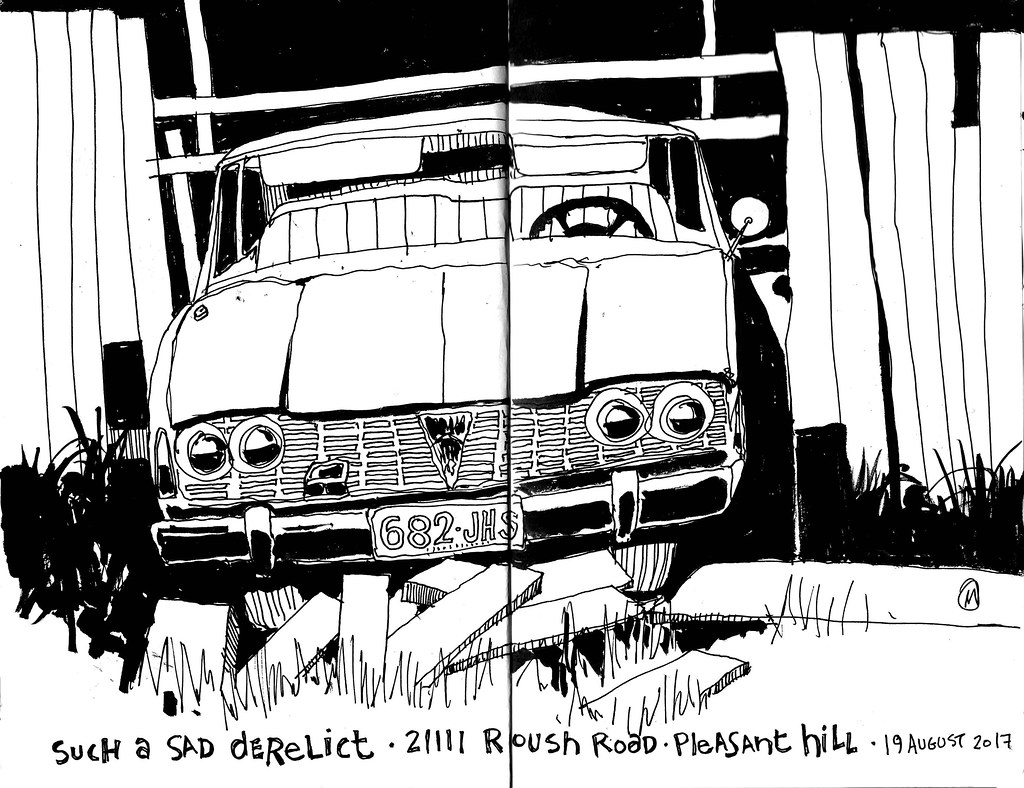 19 August, 2017. Today felt like a good time to get back to basics – a sketchbook, Uni-Ball Deluxe, and my Kuretake No. 40 brush pen. I love direct sketching with the Uni-Ball, without the “safety net” of a light graphite sketch. And though I’ll occasionally use the Kuretake to do a little direct sketching also, today it was fun to use it to add shadow and depth accents. 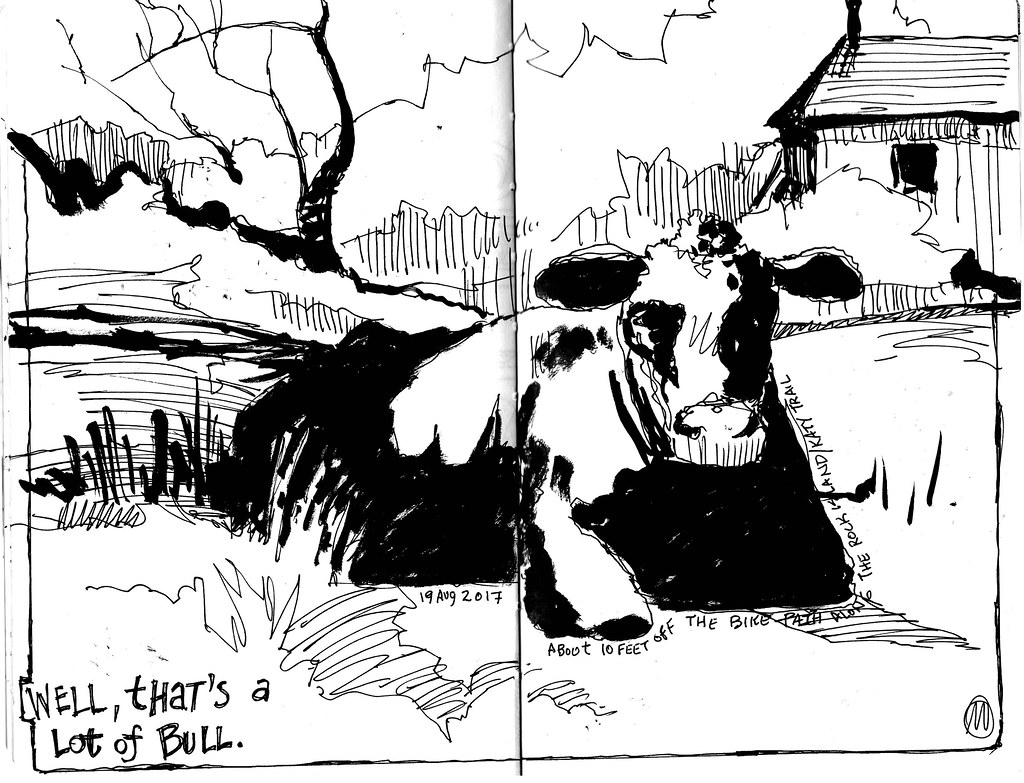 I like the graphic quality of this approach. Strong lights and darks remind me of how some of my favorite European underground cartoonists from the 70’s made their drawings.  (Uni-Ball Deluxe, Kuretake No. 40 brush pen, Canson 180 sketchbook – approximately 5 x 7 inch page size.) 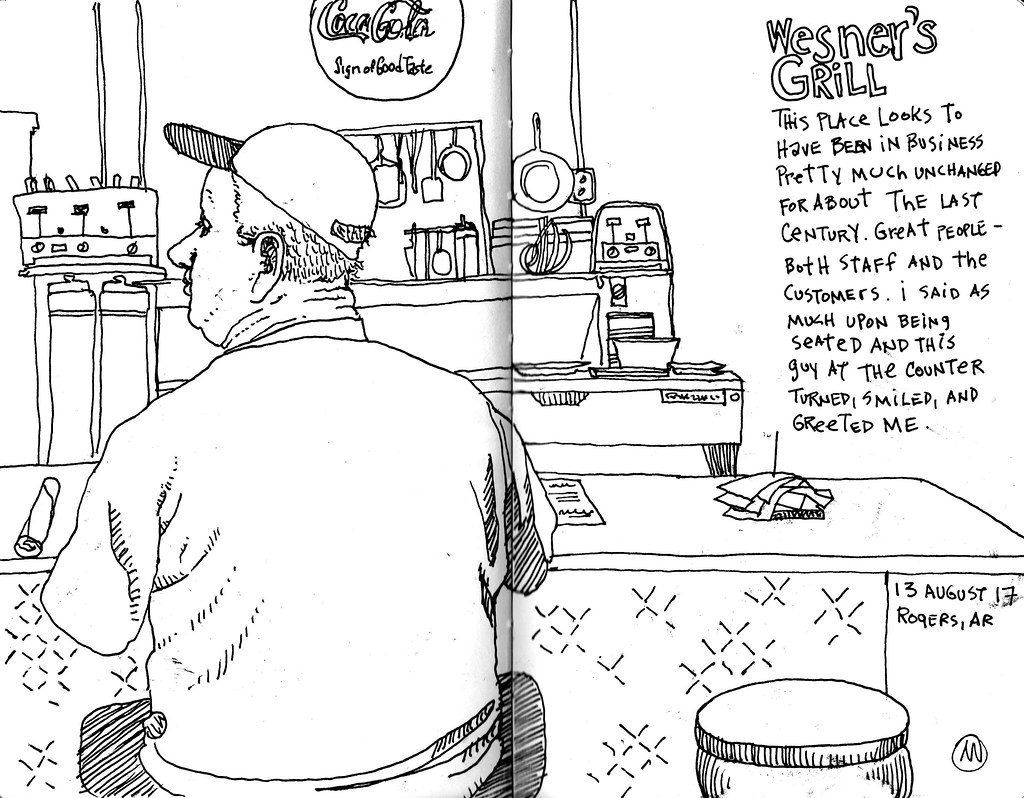 13 August, 2017. There are occasions when time and opportunity don’t allow me to sketch quickly enough. Case in point: Yesterday, I saw a woman walking two pigs on a leash through a lumberyard. Not pot belly pigs mind you, full sized pork chop bearing hogs. And I would have loved to sketch that scene! But the moment was there and gone.

I think this is part of the reason I enjoy sketching in diners so much. Interesting scenes and stories play out all around you, and for the most part these narratives can be captured with a much greater ease than, say, jotting down a quickly passing woman and her porcine pets.

Wesner’s Grill was, for me, a jewel of a find. It looks as though it’s been around for generations and the staff and customers are exactly what you’d expect to find here – almost as though they’d been hired by central casting. Said out loud, it sounds eerie but nope! The experience was as cheery as I could have hoped.

Server: “That’s ok, hon. No problem – take a look over on this page because we got all sorts of different omelets.”

Was she pulling my leg? Her smile was disarming and I chose to believe she was. Because even the mistakes were charming. My wife asked if onions could be added to the hash browns, which was duly noted on the order. Then she asked for one blueberry pancake, which was also duly noted…immediately under the request for added onions. Believe it or not, the pancake arrived with onions baked into it. We presumed it was some quaint local thing, but when we mentioned it to the server her jaw dropped. Then we all seemed figure out what had happened at the same time and all of us – and I mean the folks seated over at the counter, our server, the cook, and the two of us – well we all began to laugh uncontrollably. Because, for one thing, we ate those blueberry onion pancakes. And for another thing – odd as it may sound – they tasted pretty darned good.

Stories. I need enough time to absorb the stories when I sketch. 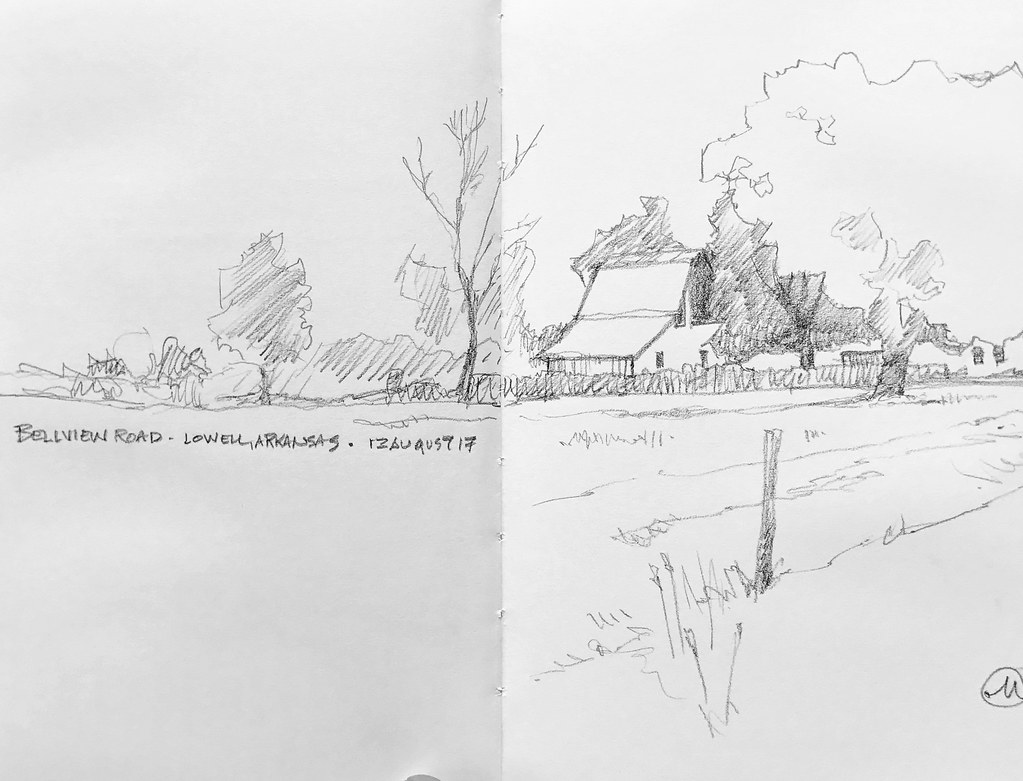 12 August, 2017. I’m in Rogers, Arkansas this weekend to help Kim get her new apartment set up. Neither of us know the area very well, so before we got the day of lugging heavy furniture up narrow stairs begun, I headed out on my road bike to explore.

My childhood memories of this place are that it was extremely rural and more than a bit like Mayberry. As I ride around, it is quite clear that things have changed a lot; urbanization has blanketed the area with high end retail, offices, restaurants, and lots and lots of paved roads.

But top a hill and just as clearly, the roots are still in evidence, pockets of the original rural landscape still exist. In a flash, I pedaled down a divided eight lane avenue, through a light, and past a Ruth’s Chris Steak House, there to discover this pasture and barn. (Blackwing pencil in Canton 180 sketchbook.) 5 August, 2017. We’re at Table Rock Lake again, which makes two weekends in a row. The arrival of August means I’ll be working with a fresh new batch of art students very soon. Meanwhile, we’re busy setting up a second household in Arkansas, not far from the dockside chair where I am currently sitting. In search of a few items with which to outfit the new digs, we’ve been engaged in a favorite pastime: prowling country auctions. Generally speaking, a country auction means that lots of people mass into a scrum-like crowd, circling the auctioneer. Because you have to jockey for position just to see what is being sold at the moment, I discovered that the best strategies for sketching while waiting for something interesting to come up was two-fold. First, throw out any preconceptions of drawing what you see right this minute and capturing a snapshot moment. Things move way too fast, crowds are in constant motion, and the organization of people and things are in a constant state of change. Instead, I like to think of each sketch as a sort of collage: draw part of one person’s body, then when they move away, wait for an appropriate new person to move into view and use my new model to continue the drawing. By doing this repeatedly, a sketch eventually emerges. I like that this approach also means I can make compositional decisions about who to include and where to place them.

Secondly, don’t try to draw the entire crowd. It’s too much to take in. Sometimes an auction is so big the auctioneers will run two rings. When that happens, the crowd divides and generally one ring has fewer bidders. That was the case in the sketch above – the second ring was going to focus on tools but had only gotten to garden rakes and ladders and such. Few bidders were interested in these items, so the crowd was much more sparse than when the auctioneers go to the more desirable items. One thing that I found to be an interesting challenge is that everything tends to be a clutter: people are grouped together around piles or rows of what appears to be total crap. Boxes look like trash until someone decides to dig through and “discover” the treasure hidden within. (To be fair, more times than not, there’s no treasure at all. It’s exactly what it looks like: trash.) But, it’s an interesting visual art opportunity to explore space and organization. I had fun working in pencil during my afternoon of bidding, emphasizing the representation of spatial characteristics of people and things.

And although no one said a word to me, I sensed that this was likely the first time anyone in this rural community had ever seen an artist at work. There were certainly more than a few interested folks looking over my shoulder as I scribbled into my sketchbook. 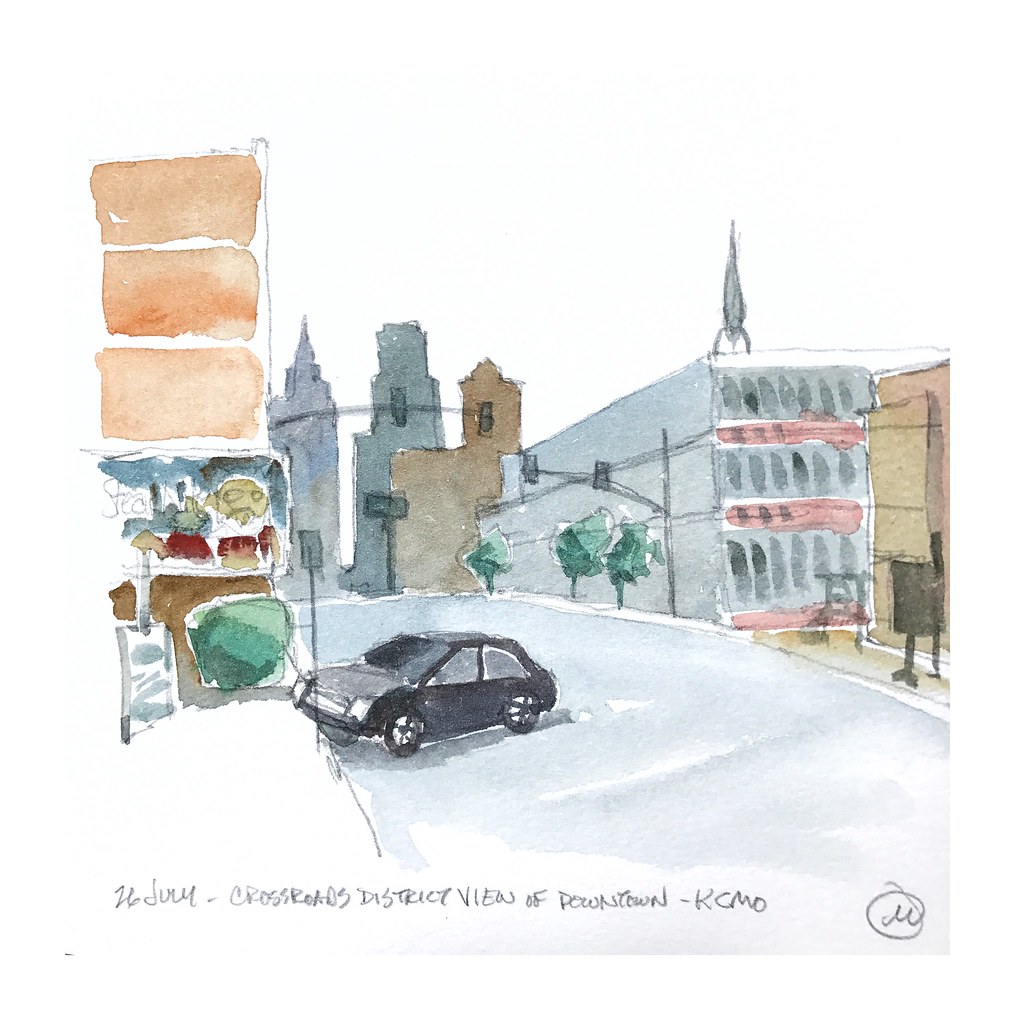 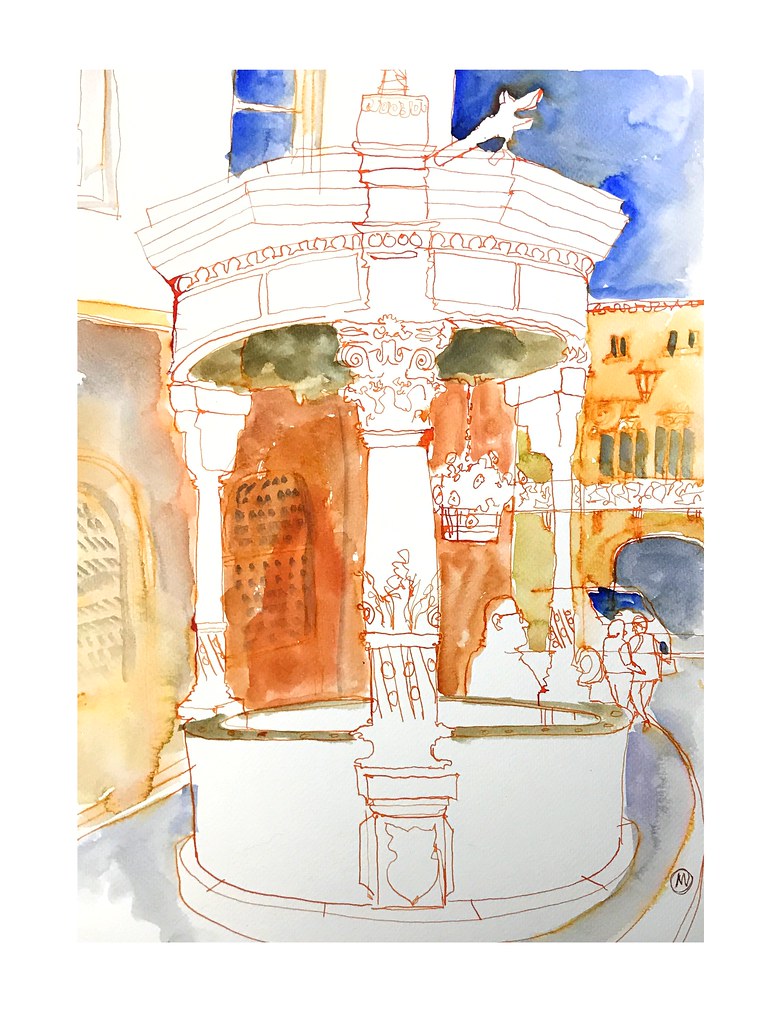 I played around a bit with a dip pen and and orange-ish-brown ink on Fabriano paper. I’m totally in love with the loose look of the lines and the sloppy play of watercolor washes! 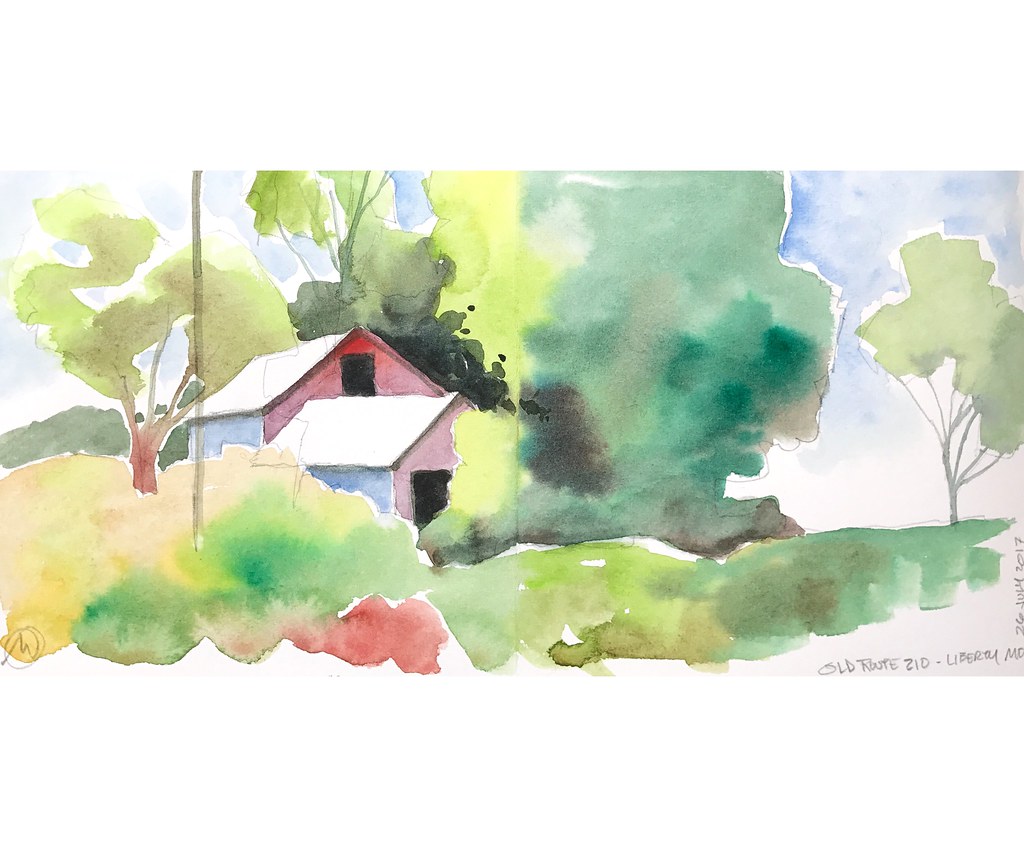 And just for something different, I stopped on a recent bike ride to make this watercolor sketch, focusing entirely on color and shape.