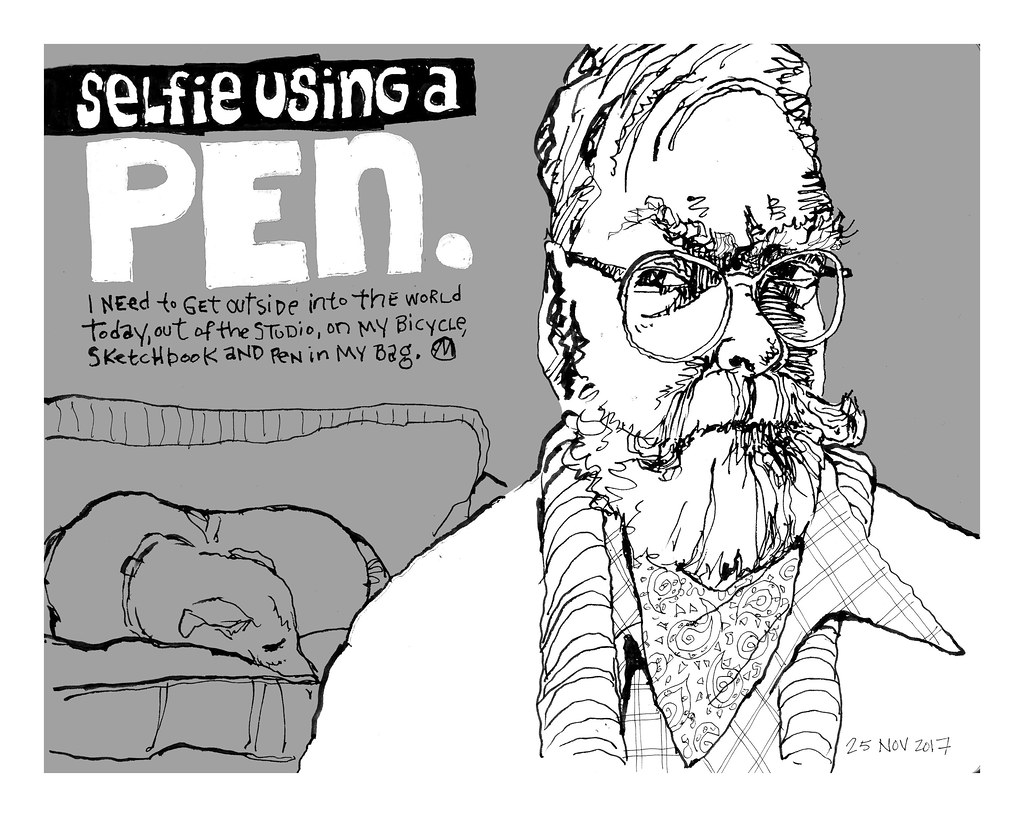 25 November, 2017. I’m testing out a new pen this morning – a Sailor fountain pen with a Fude nib. At first I found using it to be a little bit odd, but after a few minutes the back and forth tilt of the hand that’s necessary to get varying line widths becomes (mostly) intuitive. I like how the line quality reminds me of stuff I admire by Ben Shahn and David Stone Martin – in other words, embracing the imperfections of line. 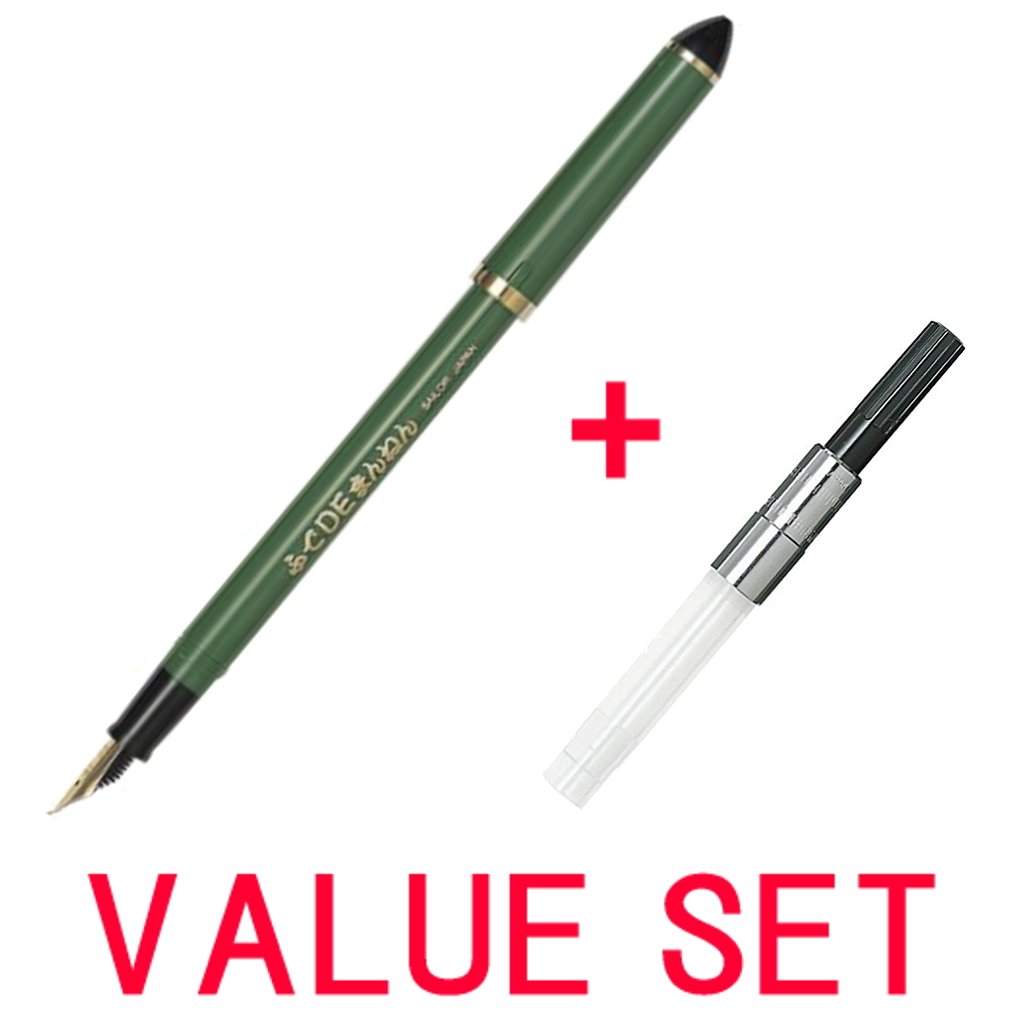 This is the pen and converter I purchased earlier this week on Amazon, a Sailor Fude De Mannen. At $14.99 for the pair ($9.99 for the pen only) I could hardly take a pass on trying it out. The nib is oddly shaped, with a funky upturned point. I’d come across it when shopping for my last Lamy Safari and decided it was not going to yield the kind of results I wanted… it looks too much like a calligraphy nib – and I suppose that’s exactly what it is. So I clicked on past and forgot about it until I saw it mentioned again in Mike Daikubara’s nifty little book, Sketch Now Think Later. Daikubara says the Sailor pen is his current favorite, noting that the bent nib “allows the pen to create brushlike lines, but with more control than a regular brush.” That statement intrigued me enough to revisit Amazon and reconsider the pen.

So, it’s clearly an economy pen. Mine doesn’t seem to scribble as smoothly as my Lamy Safari medium nib fountain pens, nor does it have the tip flexibility of a dip pen with a Blue Pumpkin nib. Heck, for the price of the entire Sailor pen – shipped! – I’d be out of pocket essentially the amount of scratch it takes to get three Blue Pumpkin points. But I rationalize that I wouldn’t freak out too much if the pen gets misplaced or lost as I would if my more expensive Kuretake No. 40 were to disappear.

I continue to find myself searching for tools that aid me in my quest to make “the artist’s hand” more present, more important in my sketches and drawings. The Sailor pen meets that criteria, feeling a lot like a dip pen that you don’t have to keep dipping into a bottle of ink. Because it’s a fountain pen, that fact alone allows a lot more freedom and flexibility of hand movement than a dip pen. Rather than varying the pressure of the nib to change line weight, you have to change the angle at which you are laying down strokes. As I alluded to earlier, the act of doing so is somewhat disconcerting at first. But I found myself easing into the change of angle after just a few minutes of pen movement.

The sketch (above) was my first attempt at using the Fude-style nib, other than a handful of lines scrawled on scratch paper to see if the ink was flowing. I quickly realized how handy it is to have a single pen that can lay down both thin and thick lines. I sketched directly with the pen, with no graphite lines to guide my ink. Thus, my initial experiment was to not only see what sort of line quality I could generate, but also to see how comfortable it would be to use it in a rather improvisational sort of way. I like it so far, and will carry it around for a while to see how it responds in different situations and on different papers. 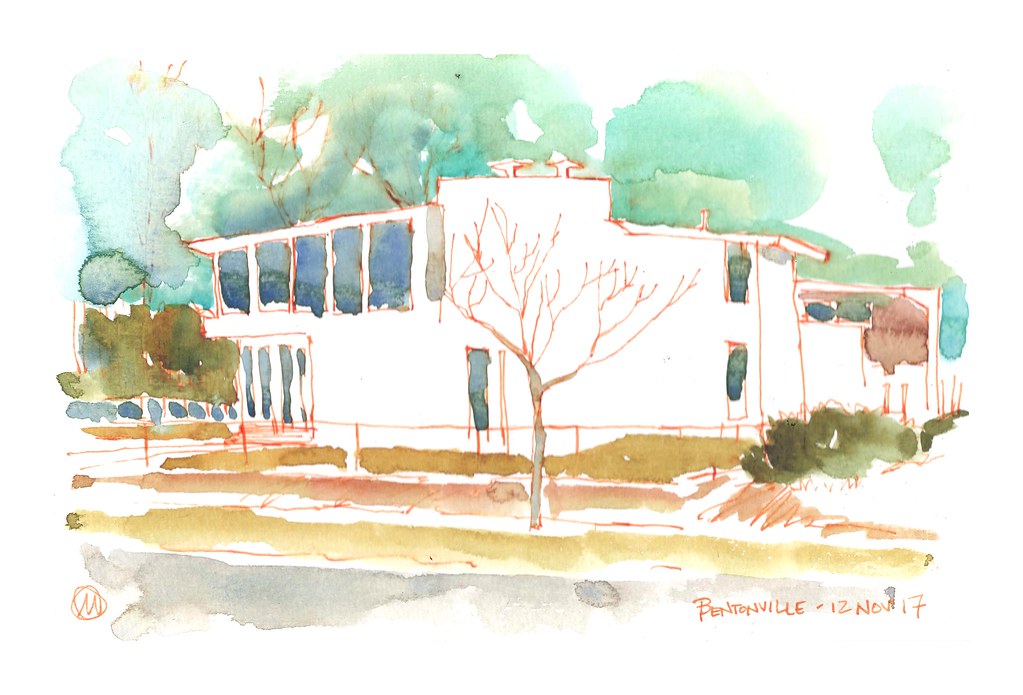 19 November, 2017. Although I couldn’t be in Kansas City at the time, I contributed to the #USkGlobal24hrSketchWalk in celebration of the 10th year of Urban Sketchers from where I happened to be that weekend, Northwest Arkansas. I was bicycling the Razorback Greenway Trail between Springdale, Rogers, and Bentonville. I stopped now and again to check out some of the more interesting historic houses and was just off of the Bentonville Square when I came across this one. It’s definitely not what I would describe as “historic,” but uncharacteristically of me, the modernist architectural influence spoke to me: The placement of the home, the respect for the neighborhood and the trees – rather than an eyesore, it fits in remarkably well. 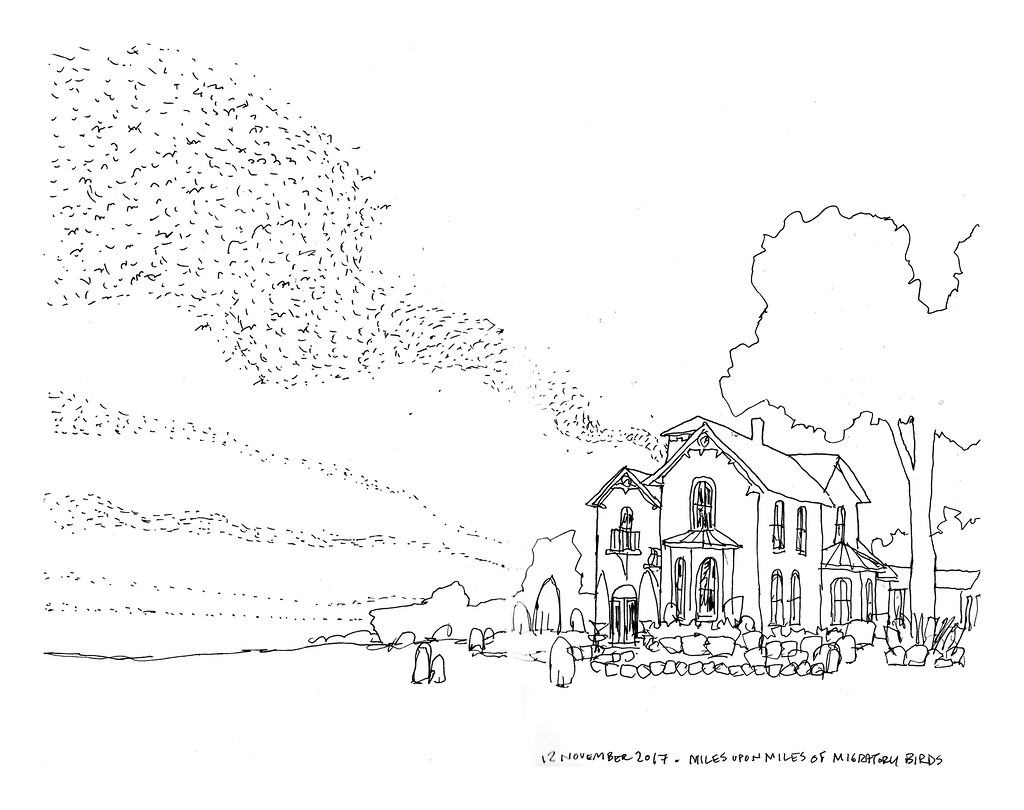 As happens nearly every year, I manage to experience the massive migration of birds heading toward a generally southward destination. Column after column of birds flock together, relentlessly winging their way past. Looking to the north, one cannot see the end of any given column: birds simply disappear over the horizon in one meandering and seamless river; so too do those birds moving overhead and departing in the opposite direction. Sometimes they gather in the trees around my house for a day or two, blackening the branches with their masses and making the loudest din. Maybe that was so on this day, but I was many, many miles from home. I felt a sort of comfort happening upon these birds on this day at this time. 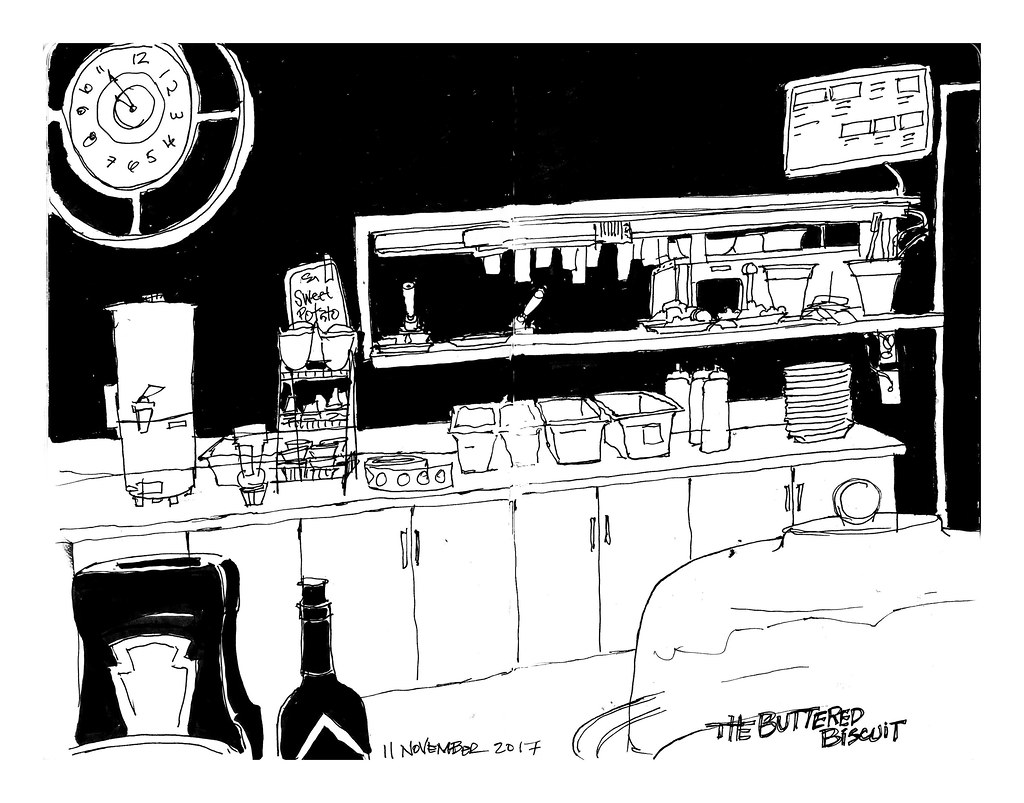 Our Saturday morning began with a visit to yet another local diner in the Bentonville/Rogers area. The place was incredibly busy, but we managed to almost immediately grab a seat at the counter. I sketched the view from my seat while we waited on pancakes and sausage and bacon and grits, all the while managing conversations with passers-by, folks intrigued by the sketch. I met a server who told me, “I’m an artist too,” and I quizzed her on where the local art store might be found. (There isn’t one.) Another woman said she could just stand there all day and watch sketches unfold, and that brought a smile to my face. 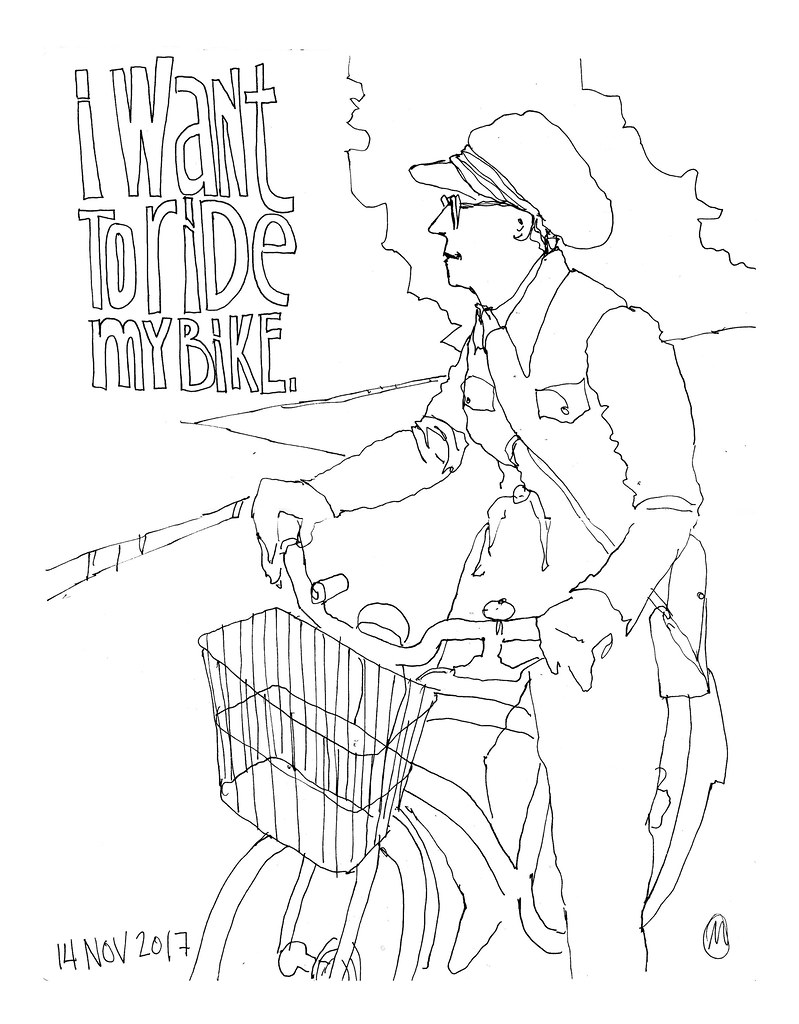 When you’re in the zone, you’re in the zone…I love it when a sketch just flows out, when most of the proportions mostly work – no pencil or construction lines, just inked lines, and a five or six minute sketch just feels sort of satisfying. More and more I’ve abandoned any semblance of preparatory pencil sketch, opting for the immediacy of inked lines. There’s something very real and honest about those marks that appeals to me. 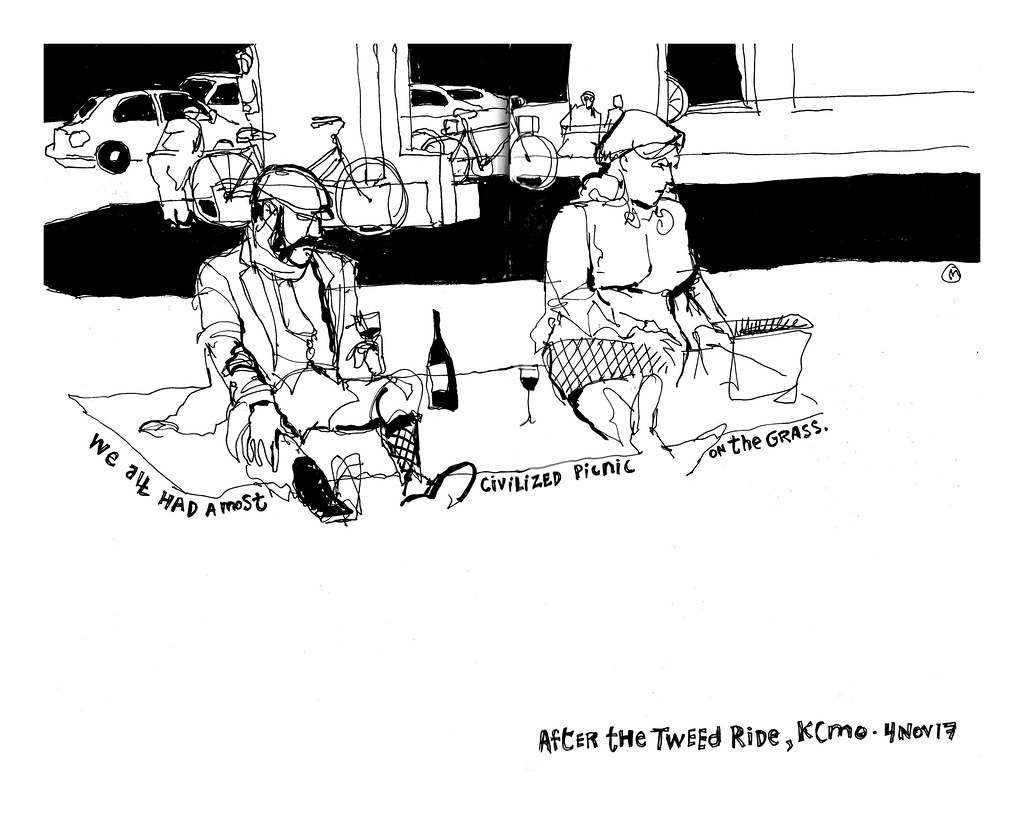 5 November, 2017. I look forward to our annual “Tweed Ride” every year. First off, I get to combine two of my passions – sketching and vintage bicycles. But more to the point, it’s just a cool, genteel event. Kindred souls get gussied up in their best thrift store version of 1930s and 40s era attire. We ride bicycles, slowly and leisurely. It’s a celebration of quieter, bygone time, a day when the bicycle was a very important mode of transportation and two thousand pounds of steel didn’t rule every paved road. 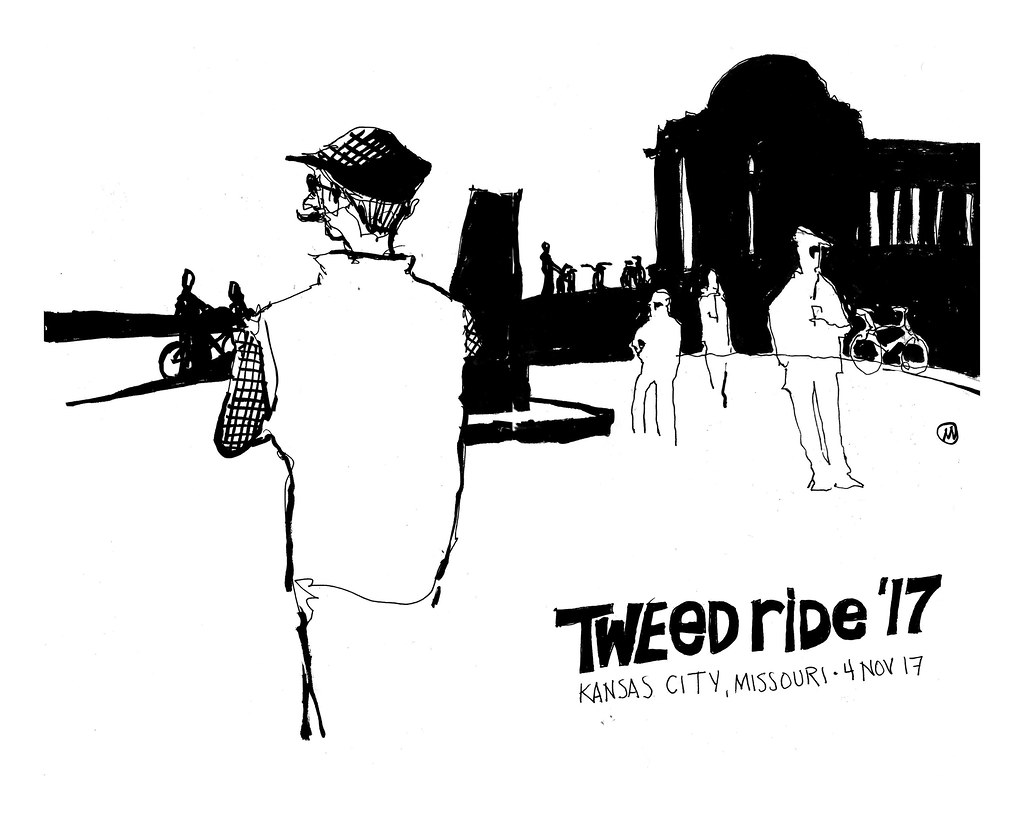 Our local Tweed Ride begins and ends in the old Northeast section of the city, adjacent to the Kansas City Museum. The neighborhood is a rich subject by itself – the museum, the houses… someone could spend months documenting the great architecture. Our gathering place is a park next to Cliff Drive, with some interesting architectural follies that provide a great spot for milling about in tweedy high fashion, lean vintage bicycles against tall stone columns, and socialize in well-mannered, courteous, and decidedly polite company. After the ride, we picnic and perhaps enjoy a cup of tea (or a glass of wine from a wicker basket that – in our case – also housed a luncheon of goodies from a local gourmet eatery.) 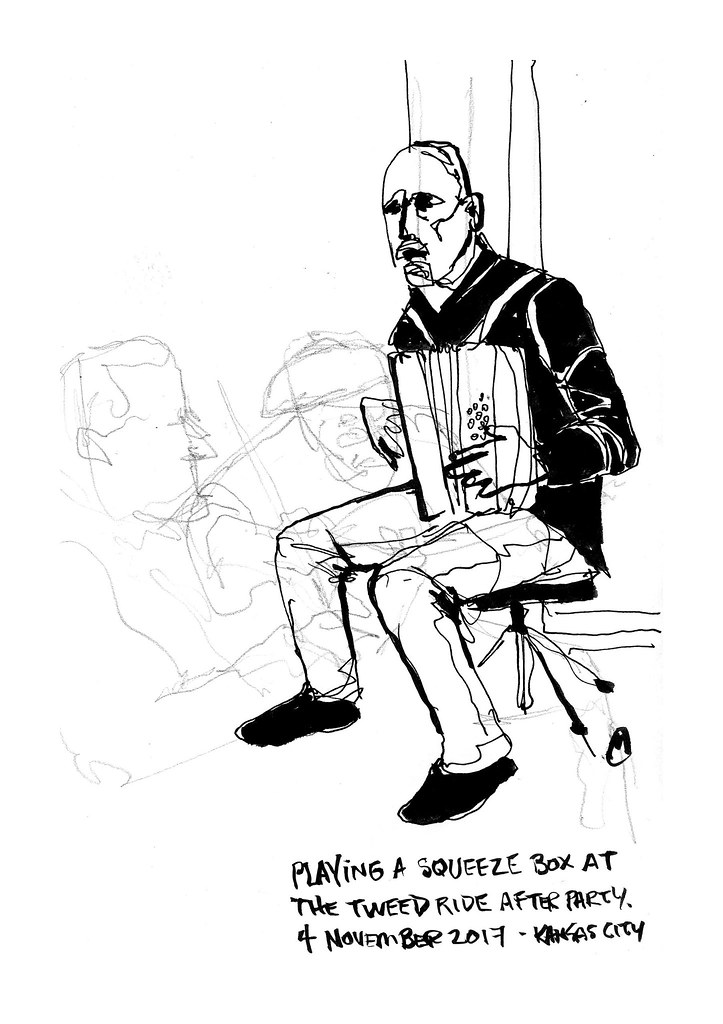 Turns out that I’ve sketched several of the musicians providing entertainment at previous events. I started with pencil and quickly decided those drawing had already been done and didn’t really interest me to do again, so I focused on the one guy I’d not seen before – the accordion player. 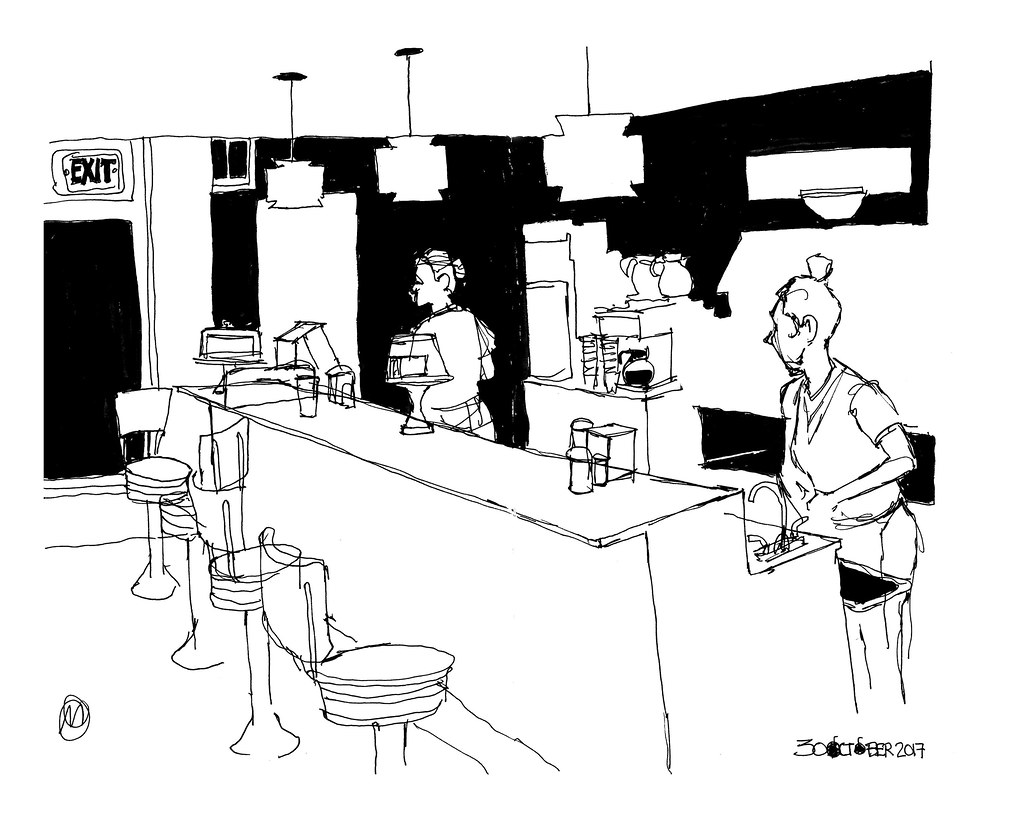 1 November, 2017. I love to draw diners. I love how folks can grab a stool and belly up to the counter, get shoulder to shoulder and order a burger and fries, maybe a cup of coffee or a malt. And almost certainly, leave room for a slice of pie topped with ice cream.

Tables have almost no business in such a place, but booths are ubiquitous as are the flourishes of chrome and large circular clocks and esoteric wall and counter decor that is unique to each and every greasy spoon. These places and the people who frequent them, the people who operate them, are as American as the slices of apple pie clearly visible under glass.

People are real in diners. Truck drivers and laborers of all sorts. Retail workers. Exhausted and happy to be off their feet for a little while. Meanwhile, servers scurry about, pouring fresh cups of coffee and taking or delivering orders, quaintly referring to customers as “Darlin'” or “Hon.” A diner is one of those places where your server still wears her hair up in some sort of bun that I am convinced they all had to go someplace to learn how to do to achieve some sort of uniformity.

Diners are perfect places to draw. If you sketch on site, you’ll invariably find the act will invariably initiate a robust conversation with your server (is it ok to still refer to servers as “waitresses” in diners?) She’ll have an aunt or cousin or neighbor who is an artist or likes to draw or paint, and that, my friends, is all it takes to complete the circuit, a personal connection between her artistic acquaintance and your yet-to-be-scribbled-upon sketchbook page.

Menus are often a single, large sheet of cover stock coated with peeling laminate. And menu items are pretty much universal from one joint to another, although there’s usually some sort of local specialty that each is “famous” for – perhaps a massive Pork “T” or a derivation of an open face. Regardless of the quality, it’s honest food.