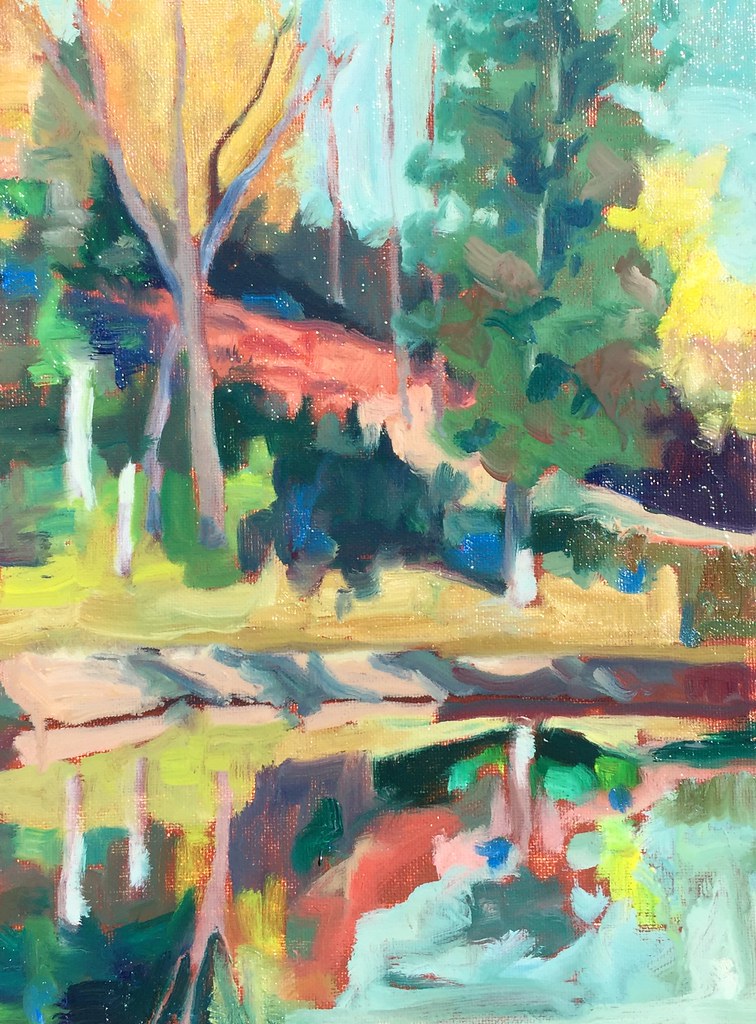 25 October, 2015. I don’t know why this plein air sketch got overlooked, but a recent comment on a later entry to this blog from November reminded me of the outing. The comment was brief: “shinto shrine.” I presumed the writer to infer a certain metaphorical connection to the later sketch. Perhaps it was only coincidental that immediately behind me on that particular November day – perhaps less than fifty yards, in fact – stands a simple post and beam structure, situated cozily beside a pond. Open on four sides, with a small bench placed underneath for contemplation and communion with nature, this place looks remarkably like a Shinto shrine.

And it was this reference that led me to recall standing under the simple roof as I painted the pond a few weeks earlier. 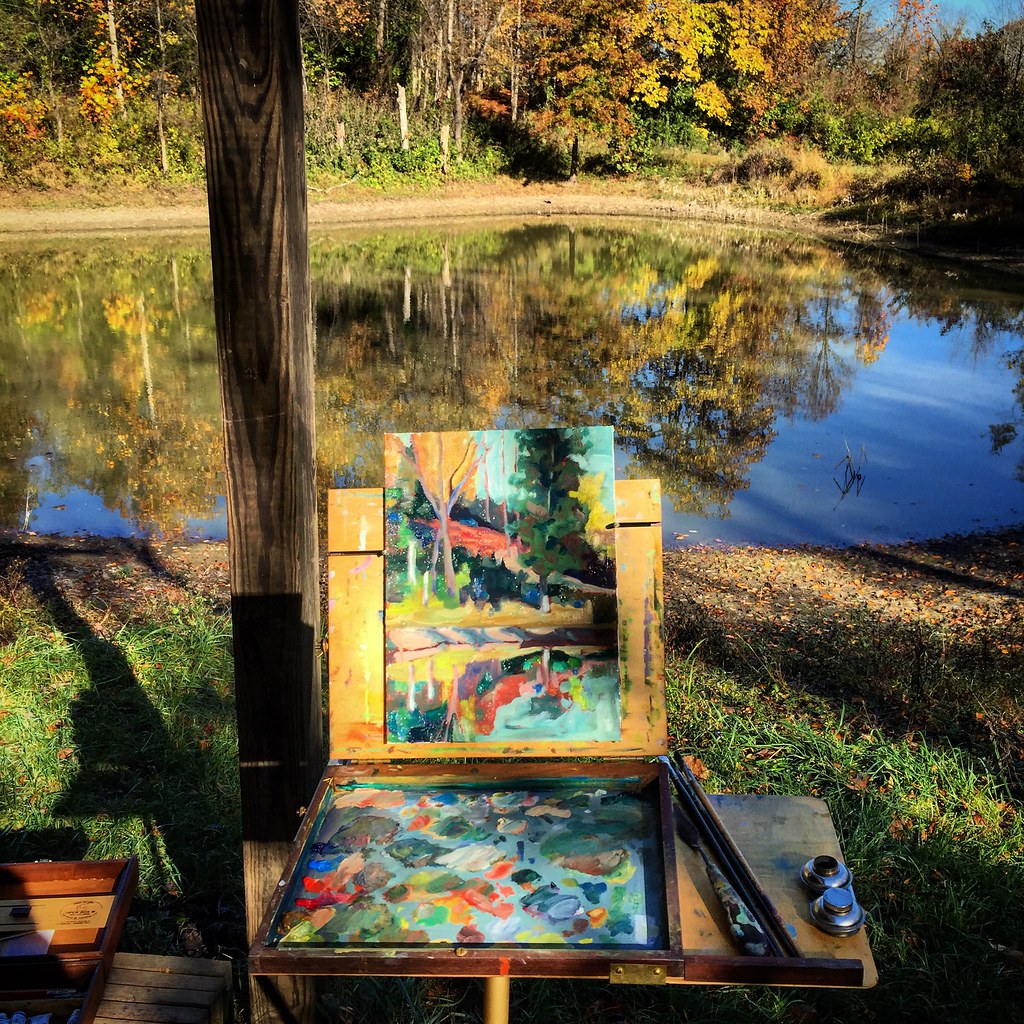 Unlike today’s wintery conditions, the Fall foliage was in full color. As usual, I was less concerned with capturing the photographically accurate rendering of the place and more interested in communication of color. Thus, the clear ultramarine sky became bleached, with a hint of mint, and the path, nearly hidden from view from my vantage point was given greater emphasis, along with the warm patch of empty hillside. Greens tend to aggravate me to no end, and I look for ways to introduce variety and neutrals in an often elusive quest, a fine balance between believability and loosely blobbed paint. (Martha Lafite Thompson Nature Sanctuary, Liberty, Missouri. Gamblin oils on 9 x 12 panel, about 45 minutes.)

28 December, 2015. Outside, the wind blows microscopic particles of ice across and over the roof tops, clouds of the stuff surging and dancing and puffing like a live animal, wildly free. The mercury has dropped on the thermometer, snow covers the ground and decorates the topside of boughs, the crooks and crannies of tree limbs. The world is mostly white and black, with a bit of gray thrown in for good measure. Whatever few leaves had been left clinging, futile effort that it was, are now gone. Winter has arrived.

The dog whines and begs to be released into this world blanketed in white, while the cats snuggle next to the heating vent, cuddled into a furry ball for hours on end. Yes, winter has definitely arrived.

Christmas break is half way over – or is it that I still have half of my time left before returning to school? It sometimes depends on my mood whether or not the glass is half empty or half full. I opened a new Canson sketchbook today and soiled the first pages with ink. I’m toying around with a new tool, a Pentel Pocket Brush Pen – it’s about time, too: I’ve carried the pen around with me for a month now without having put it through its paces.

The pen is fun and forces me to further restrain my marks, limiting me to choose only the most important lines to place on the page. I rather enjoy the Zen-like requirement, even though it also forces me to modify my more natural free-flowing line quality. I could see this being a tool for drawings informed by Chinese brush paintings. (Pentel Pocket Brush Pen, Canson 180 degree Sketchbook; Liberty, Missouri) 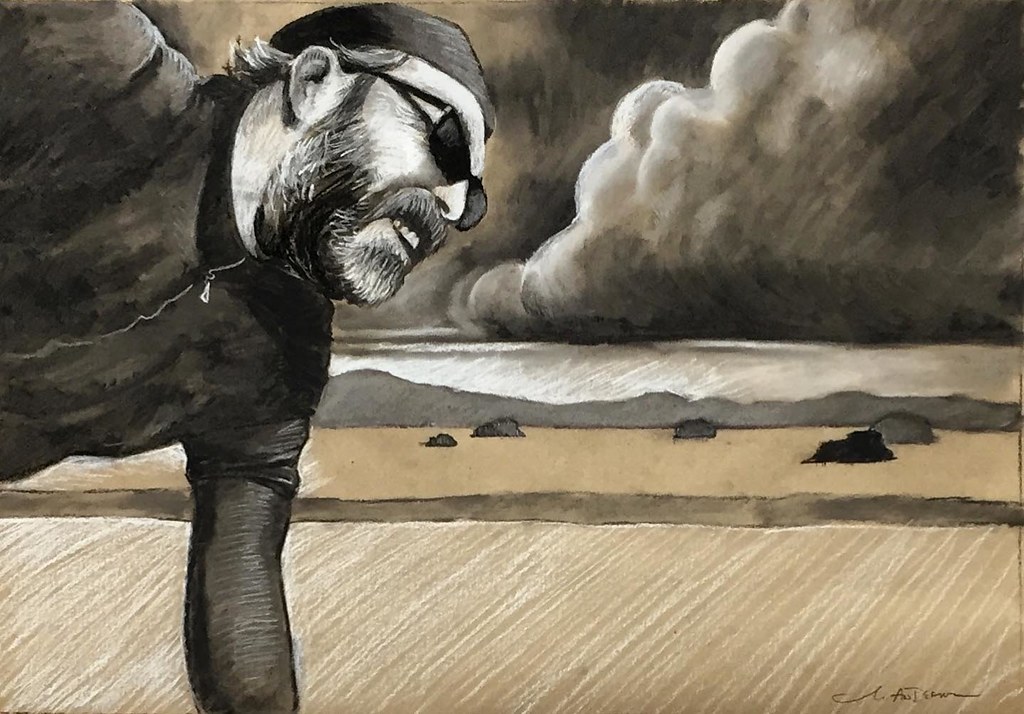 8 December, 2015. I haven’t been able to get any personal work done recently; teaching has more than dominated my time. My drawing students are in the midst of developing a large scale chalk and charcoal self portrait on brown butcher paper to illustrate the theme of “Where’s my refuge?” I like to draw or paint along with them to model the sort of decision-making that artists engage in throughout the process of art-making. 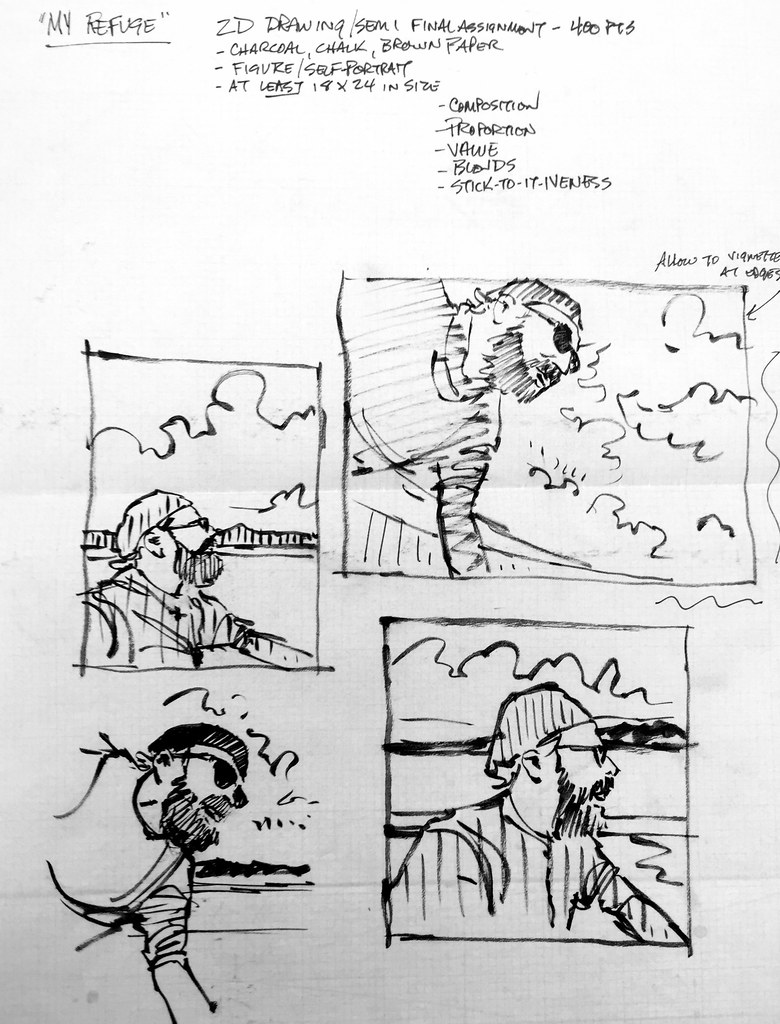 I tell kids to begin by developing sketches that focus on composition rather than tiny details. Details can always be added in later – I like to leave some decisions for the actual drawing itself. Reference photos are appropriate, since this is a self portrait, but I urge them to avoid being totally influenced by the photography…it’s important that the artist make artistic decisions as the work reveals itself. 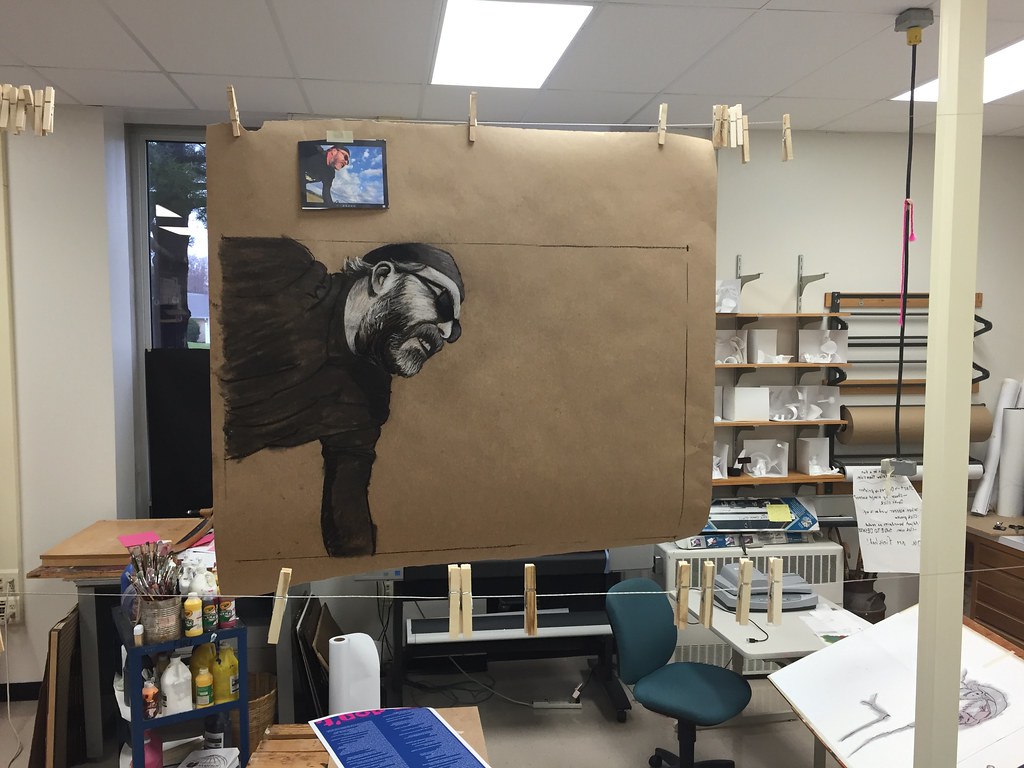 Hopefully I’m staying just a little ahead of my class as I work. This illustration comes after about 70 minutes of drawing. Notice that the torso (clothing) is still very sketchy, and even though it will be quite dark in the finished piece I will be looking for opportunities to bring some variation of values into the drawing. I notice that details within the ear are a little too crisply defined, and that a highlight should be added to the cheek. Something is missing around the mouth, and the direction of the marks on the upper cheek work against the modeling of the face making things look less round. It’s these sort of observations – along with an ability to be PRODUCTIVELY self critical – that give the visual learner a better chance for drawing success. 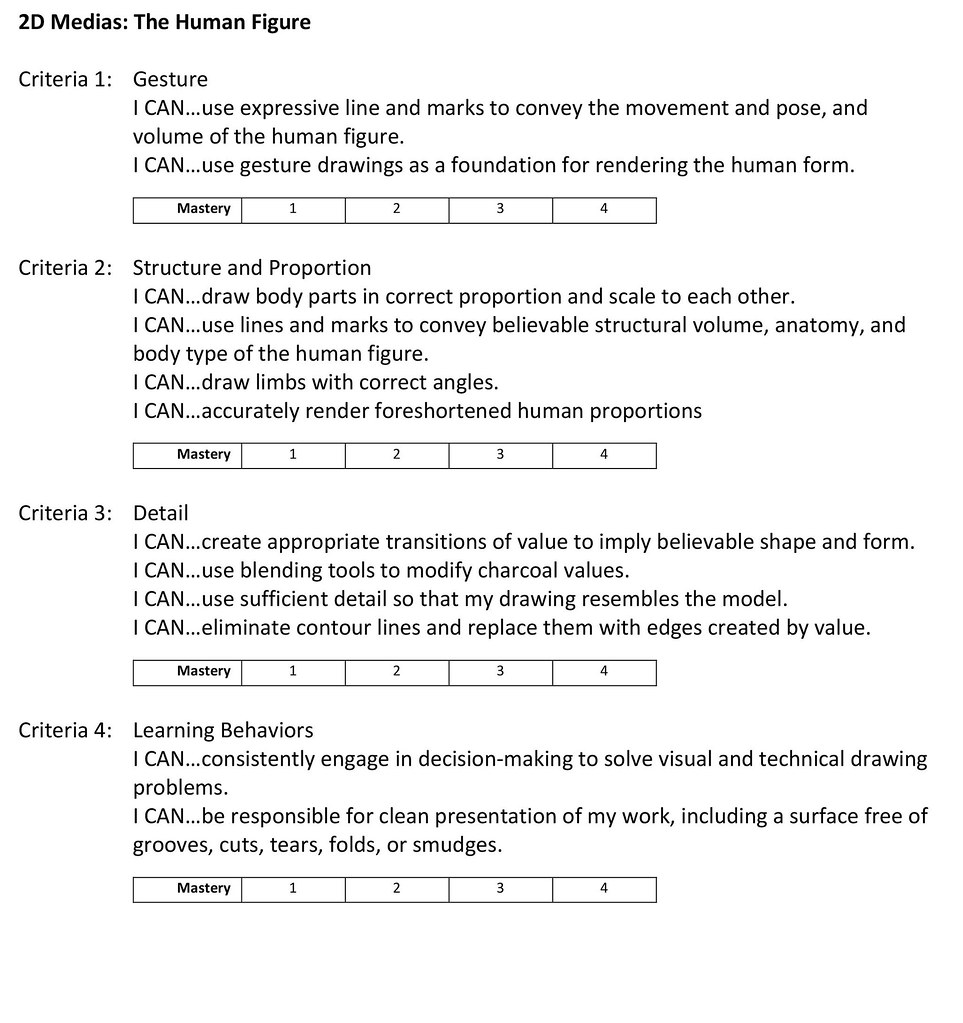 Incidentally, I really hate subjectivity when it comes to providing instruction, assessment, and feedback to artistic learners. We should be able to provide some concrete feedback instead of saying something stupid like, “well, I think you could do a little better.” The rubric above is what I use to provide specific information for improving drawings of the human figure. It’s a starting point for good conversations that can develop into more detailed examinations of one’s work. (Vine charcoal, white chalk, brown butcher paper, home made blending stub, approximately 38 inches wide.)