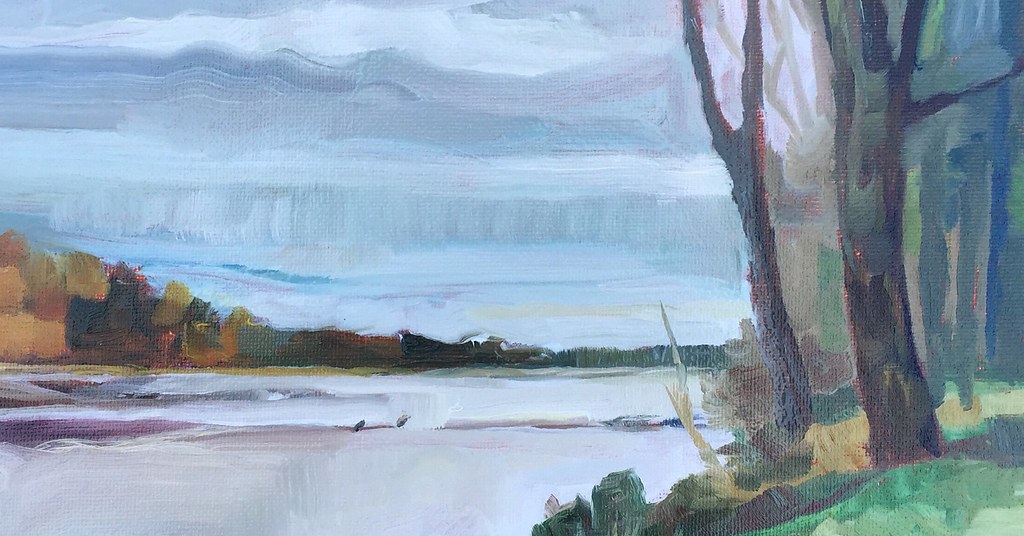 15 November, 2015. It was a gloomy, blustery afternoon and I wanted to paint along the Missouri River. Rain threatened the entire time I stood on the soggy bank in La Benite Park and my hands were quite cold. Despite blocking in the composition, I somehow managed to paint the horizon line on an angle. Furthermore, I felt like the extra bit of foreground was a mistake so I used the end of my brush handle to mark off a “crop line” in the wet paint and cut the board down to a more extreme horizontal motif later, after the paint dried sufficiently. (Clay County, Missouri. Oil on panel.) 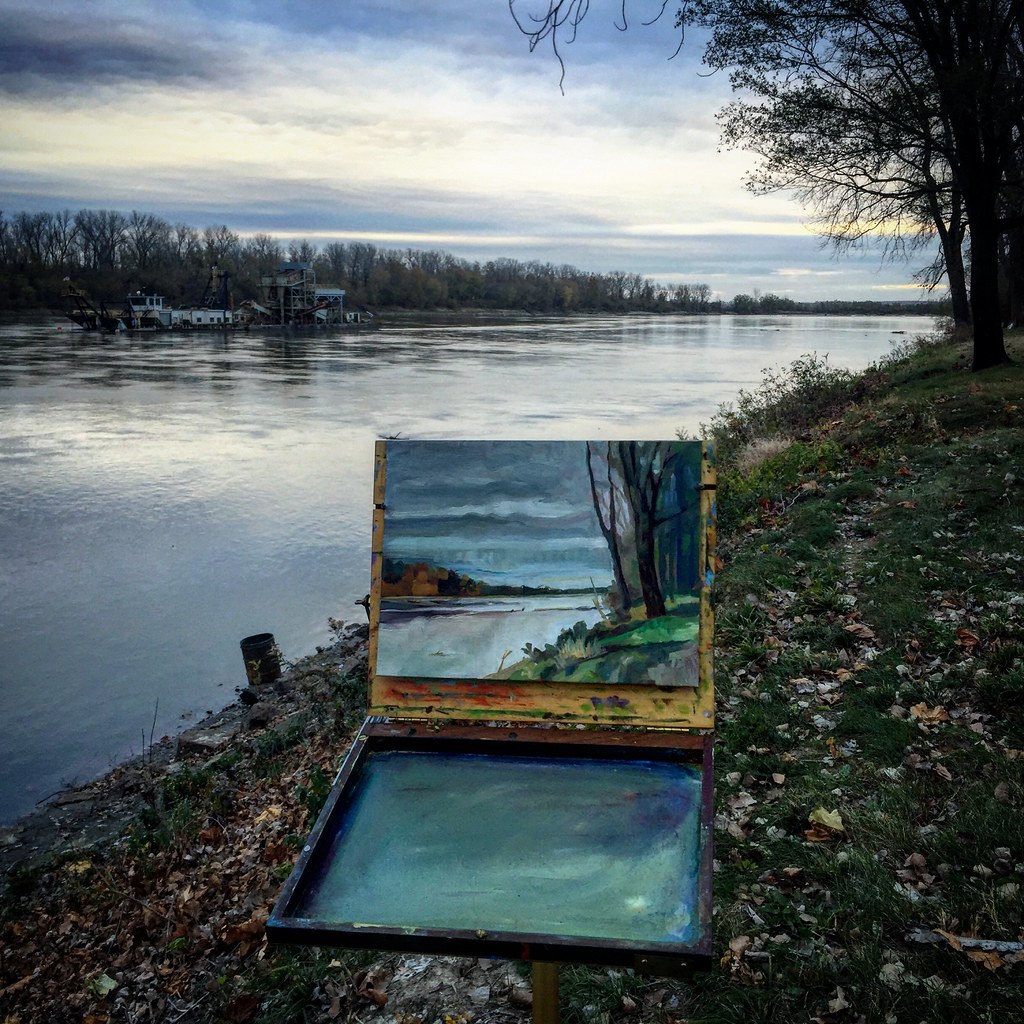 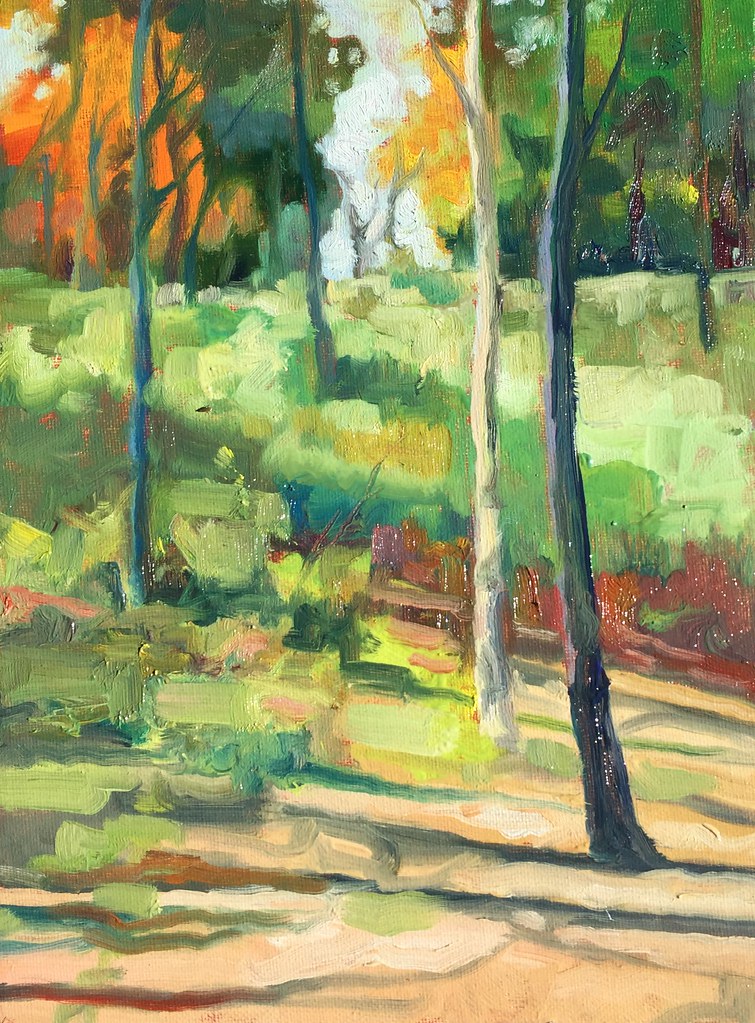 8 November, 2015. I often find myself drawn to the paths of Martha Lafite Thompson Nature Sanctuary, a small, unassuming tract of hilly, wooded land on the outskirts of Liberty, Missouri. It’s nearby, and within five minutes I can be surrounded by trees and birdsong. Especially in the early morning and late afternoon, this is a wonderful location for painting and sketching: long shadows trace the contours and undulating surface of the hills that make up nearly the entirety of the property.

As I reconnect with oils, I find a common pursuit with that of my line work and watercolor: Keep things loose and free. Avoid the temptation to overwork; enjoy the flow of mark making, the pushing around of paint, the calligraphy of line – and accept the gifts of chance as they are presented. I want to see that lines are drawn, that mistakes are made, that the surface is painted; if the process gets too precious then it’s no longer even about the process, but about the end product…and that is anathema to the process. 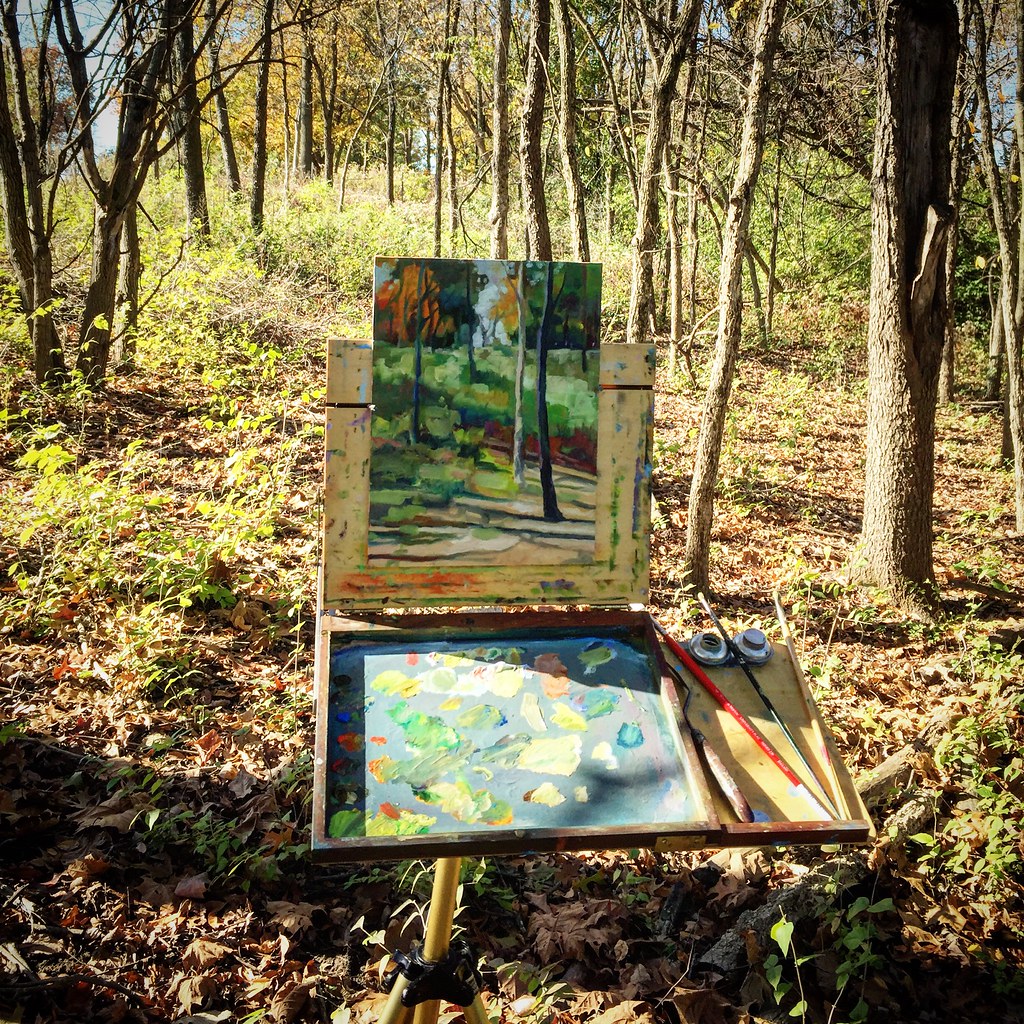 I’m not interested in photographic – or even accurate – representations so much as I am reacting to the moment and place. I remember the first time this occurred to me. I was in college; there was a massive thunderstorm brewing and suddenly I was overwhelmed with the desire to be a part of it. For me, this meant rapidly assembling a painting kit and heading outside to capture the elemental fury that was about to take place. My roommate laughed nervously and told me I was nuts. I vividly recall the desire, as much as I do the frustration of not being able to capture even the simplest part of the storm. Thirty years later I understand that I was approaching things as if I was a camera, rather than as a painter. Faithful documentation – even had I the skills to do so back then (and I decidedly did not) – was missing the point. (Clay County, Missouri. Oil on tinted panel, 12 x 9 inches.) 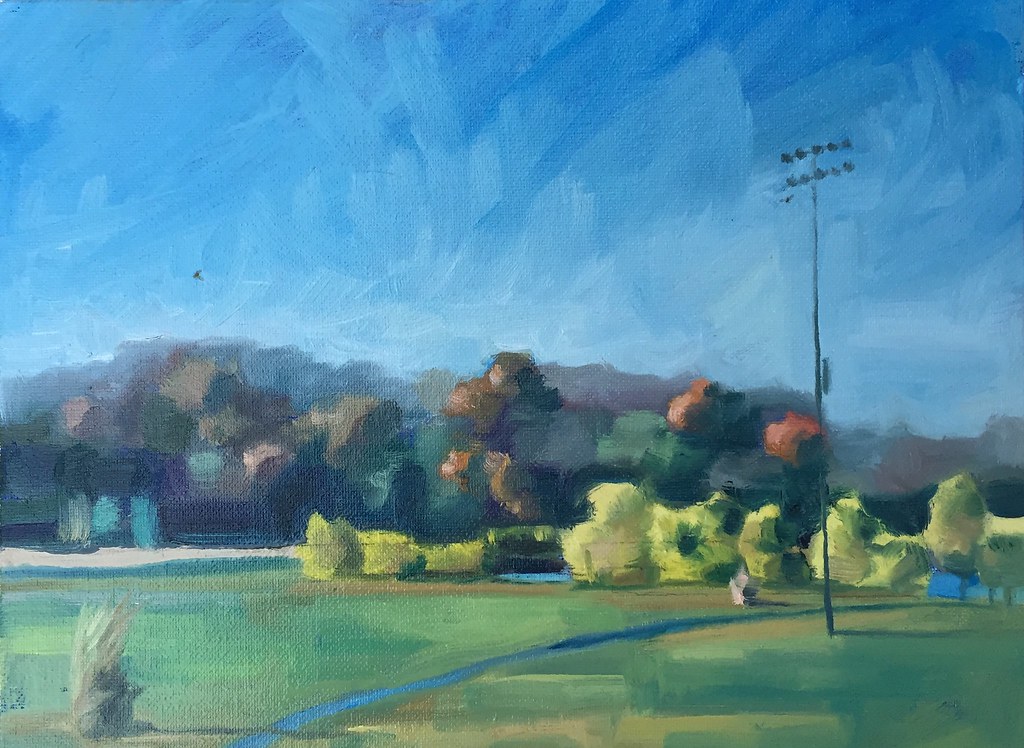 1 November, 2015. A last gasp of summer weather on the first day of November. Swarms of gnats were blown around the park in the gusting wind, and a few of them managed to find their way into the wet paint. (Once dry, their little corpses can just be brushed off the surface.)

Seemingly empty of anyone but me, there was not a car, a hiker, a baseball player, or a fisherman to be seen. Even in such a setting, standing in front of canvas seems to be some sort of people magnet. I watched as a four-wheeler made a beeline toward me from across the fields. One of the park maintenance guys wanted to see what I was “photographing” and he was happily surprised to discover I had a painting on the tripod, rather than a camera. (Fountain Bluffs Park, Clay County, Missouri. Oil on 12 x 9 inch panel.) 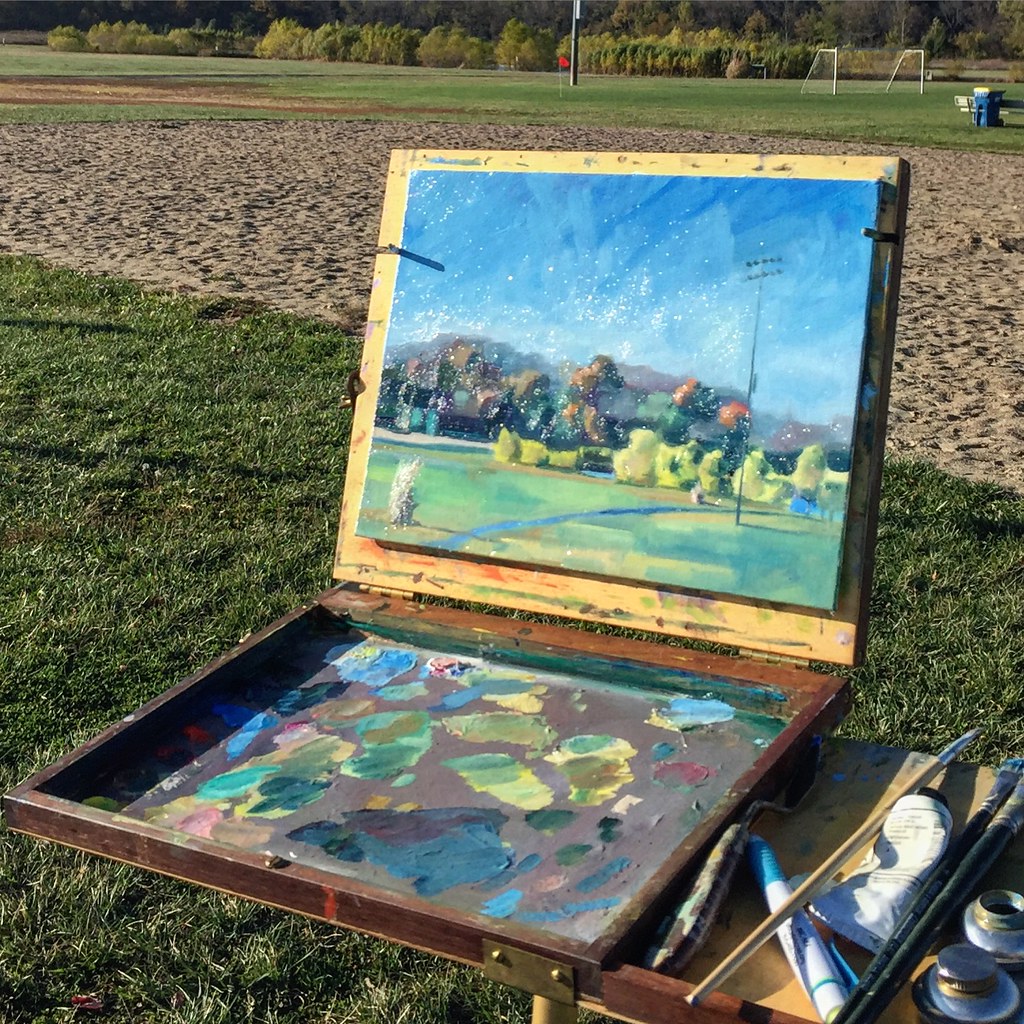 I’ve been asked before about the pochade box I use, so I’ll share a little about my kit here. Although I’ve got a couple of French easels I’ve never found them especially useful in the field – they’re bulky, hold one very exposed canvas, and almost never seem to want to adequately adjust to my needs. So about fifteen years ago I began to research pochade boxes – compact artist kits that allow one to carry their studio with them into the field. One of those I discovered was the Open Box M design, a three-part system comprised of a folding palette (pictured above), a size-adjustable panel holder that will hold four wet panels, and the exterior box. At the time, the boxes were handcrafted and quite attractive. I believe the original designer passed away a few years later, but looking at the website it appears the craftsmanship is still superior – although very spendy. I’m also not seeing the original exterior box on their website…hopefully I simply overlooked it, because it’s the part that organizes the entire kit.

The folding palette is a nice, simple bit of engineering. As you can see in the photograph, the lid lifts up to reveal a paint mixing surface. The lid has spring-adjustable prongs that hold the panel firmly in place while painting. A couple of strategically located tighteners on brass arms (not pictured) make adjusting the angle a snap. And an extra detachable “wing” provides the artist with a little additional flat space for brushes, tubes, etc. The palette attaches to a tripod by means of a tripod socket on the underside. Frankly, this is the most useful/functional field kit I’ve used for oils. The caveat here is that I was fortunate enough to get a kit that worked for me several years ago and never felt the need to test anything else out – there may be kits out there that work far better for someone else’s needs; this does the job for me.