31 October, 2015. Lately, I’ve been painting en plein air in oils again. I figure I’ve been away from oils for close to a decade, the solvents and toxic heavy metals (like cadmium and cobalt) having weighed heavily on my mind. Not long ago I began to experiment with oils that clean up without solvents and are free of toxins. It’s a lot like rediscovering an old friend, and I’ve been carrying my field kit in the back of the car with me.

Crunchy leaves, cool wind coming off the lake, overcast skies. Perfect Fall weather! My hands are cold. I’m still getting my chops back with oils and bristle brushes. I have to think deliberately about placing colors, cleaning the brush after each stroke, mixing and matching – which is functionally quite a different process than with the watercolor media in which I’ve been immersed over the past decade. At some point it will all come back to me, to be a natural set of motions – you know: just like riding a bike, as the old adage has it.

The wind began to pick up, and I had to chase down a suddenly mobile paint-drenched paper towel. A mist was in the air and tiny water droplets began to appear on top of the oil paint.

Moments later it began to rain, and I felt like all was well in the world. (Watkins Mill State Park, oil on tinted panel, 9 x 12 inches.) 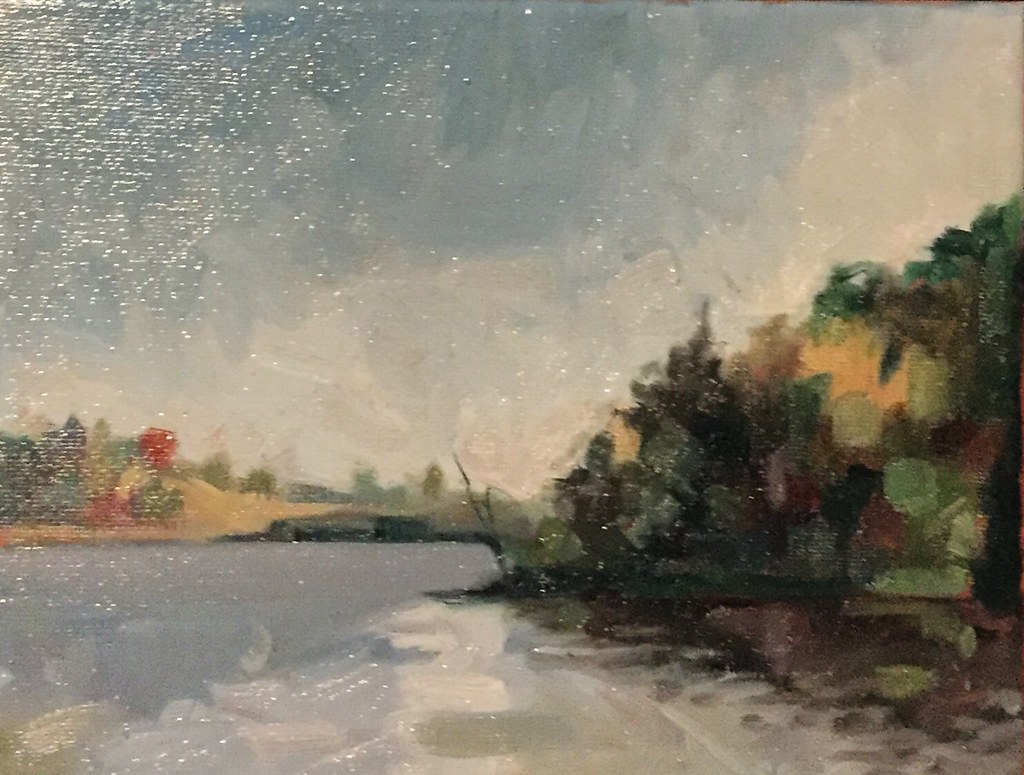 18 October, 2015. For the past several years now my oil kit has gathered dust, largely due to a growing apprehension about the toxicity of cadmiums and the use of solvents. Meanwhile, I learned to enjoy the freedom of expressive pen lines, and the splash, sizzle, and dazzle of watercolor. Still, I’ve missed being able to simply push paint around on a gesso board or canvas…it’s almost like a sculptural experience.

A year ago one of my art supply reps told me about how Gamblin paints could be used entirely solvent-free, and that the paint wasn’t toxic. (Don’t take my word for it – you’ll need to do your own due diligence when it comes to stuff that could slowly kill you.) I promptly ignored the basic kit he provided me, reminding myself that I was now a drawing/watercolor artist. 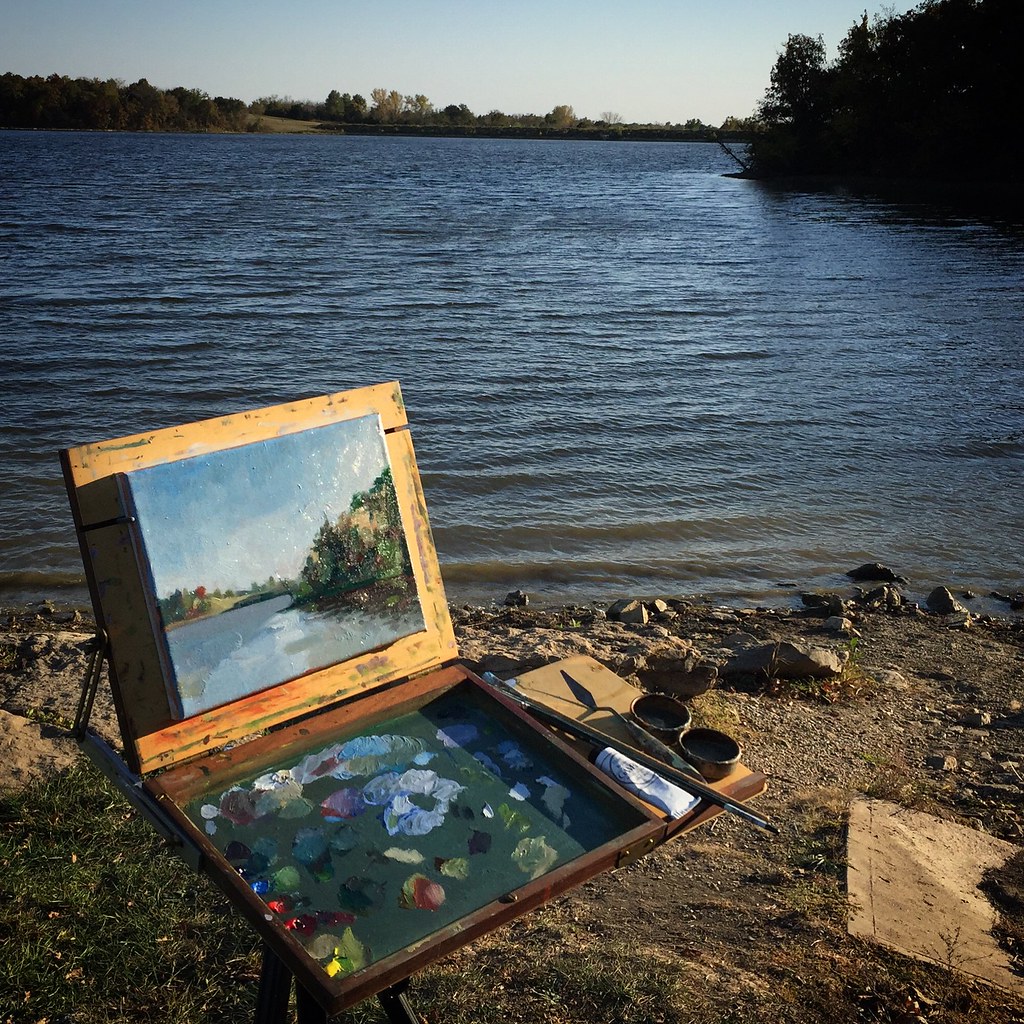 A couple weeks ago I began joining a plein air group on Saturday mornings. I got out the test kit, supplemented it with a couple of additional primaries (the test kit needed to have the contrasting cool or warm primary added to satisfactorily complete the color spectrum) and began to paint in oils again. In some ways it’s a little like riding a bike – I’ve always enjoyed quick oil paintings en plein air. But I need to exercise my chops and bring back the accomplishment I’ve allowed to atrophy over the better part of a decade. (Oil on gesso panel, approximately 10 x 8 inches, about 45 minutes – Watkins Mill State Park, Missouri.) 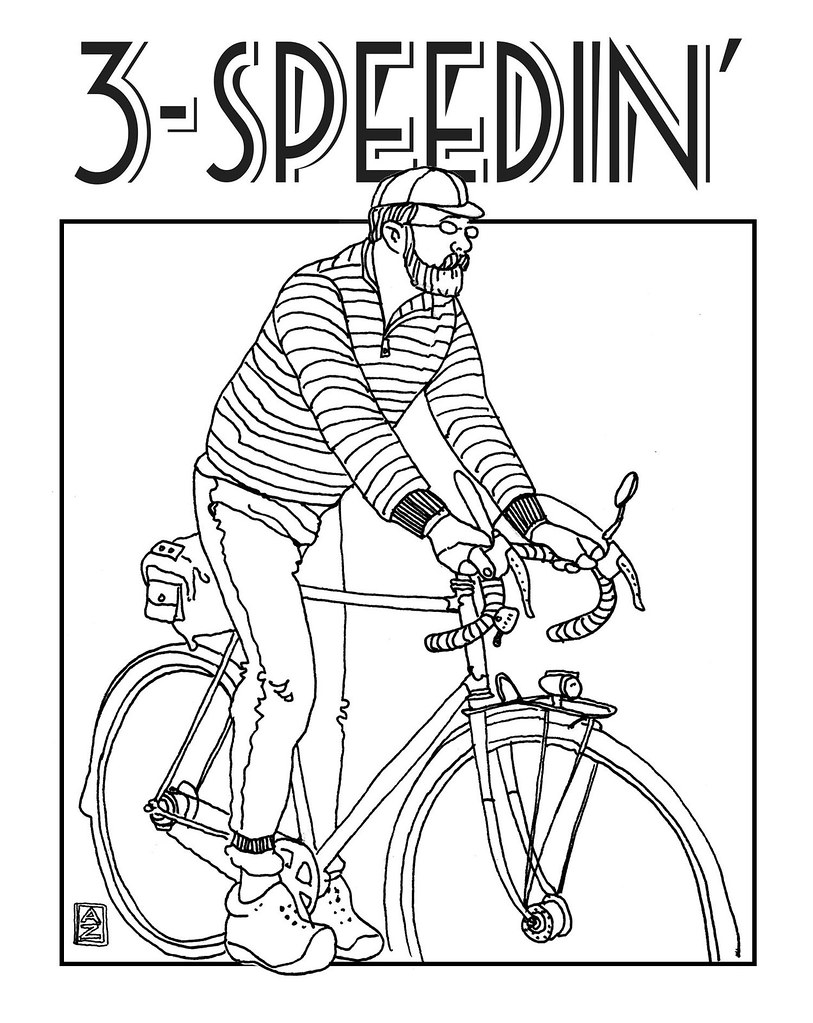 10 October, 2015. I’ve been gone from these pages for a while now – preparing for a new school year and getting my drawing and design students off to a solid start has left me with precious little time to make any personal artwork myself. This is a quick sketch I made a few nights ago for a postcard I sent to Shawn of Urban Adventure League fame in celebration of “Three Speed October.”

The weather is awfully nice, folks. Get on your bikes and ride…and take a pen and sketchbook along for the ride. (Liberty, Missouri. Lamy medium nib fountain pen on some kind of random scrap of paper in my bike bag.)