23 November, 2016. Bubba’s car is on the fritz so I had to pick him up from work yesterday. Due to the holiday, he only clocked half a day so it happened that we were heading home – and right past the turn off for The Local Pig – at 11:30. Well, that seemed like fate to me!

We stopped to shop at the meat market for what I consider to be the best smoked and brined chops I’ve ever had, and ate lunch from their food truck. Normally, the Pigwich has a long line of hungry, patient patrons but the crowd was small on this chilly November day. Bubba sat on one of the benches immersed in a video game of some sort while our sandwiches were being prepared and I used the opportunity to use him as the subject for a quick sketch. 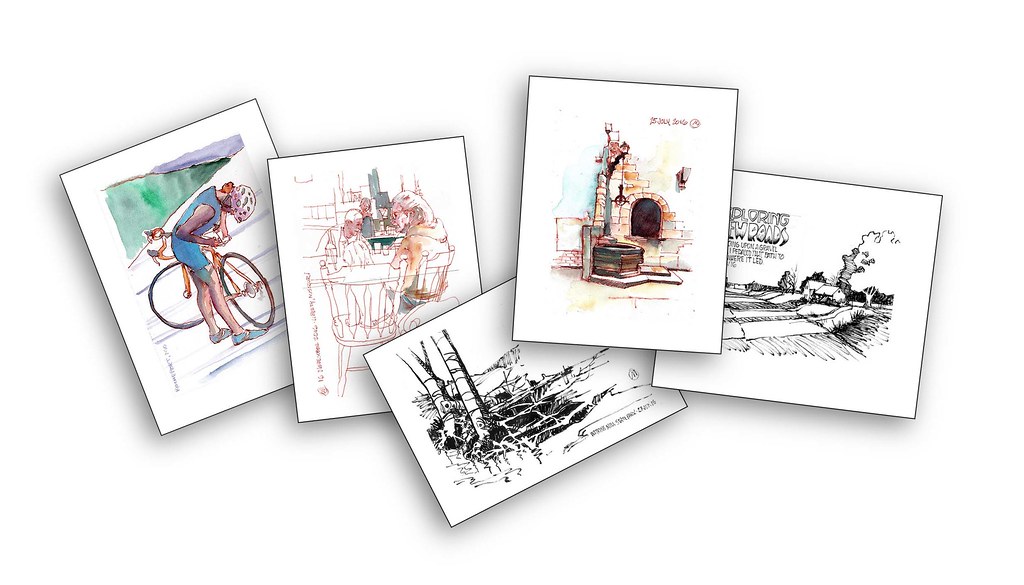 I get a lot of requests to purchase reproductions of my sketches, as well as original artworks. Most of the sketches that appear on the pages of Just Sketching are available in a high quality printed format. Most reproductions are approximately 8.5 x 11 inches and printed on heavy art paper. Set up with a generous white border, I like to use a wider mat in a 16 x 20 frame.

Unmatted reproductions are reasonably priced at $25, plus $5 for shipping (CONUS only.) If you wish to make a purchase, please use the contact form below. Be sure to indicate the image(s) that interest you. I accept payment through PayPal.

Original drawings and paintings are often generated on commission. However, I seldom sell my original sketchbook work. 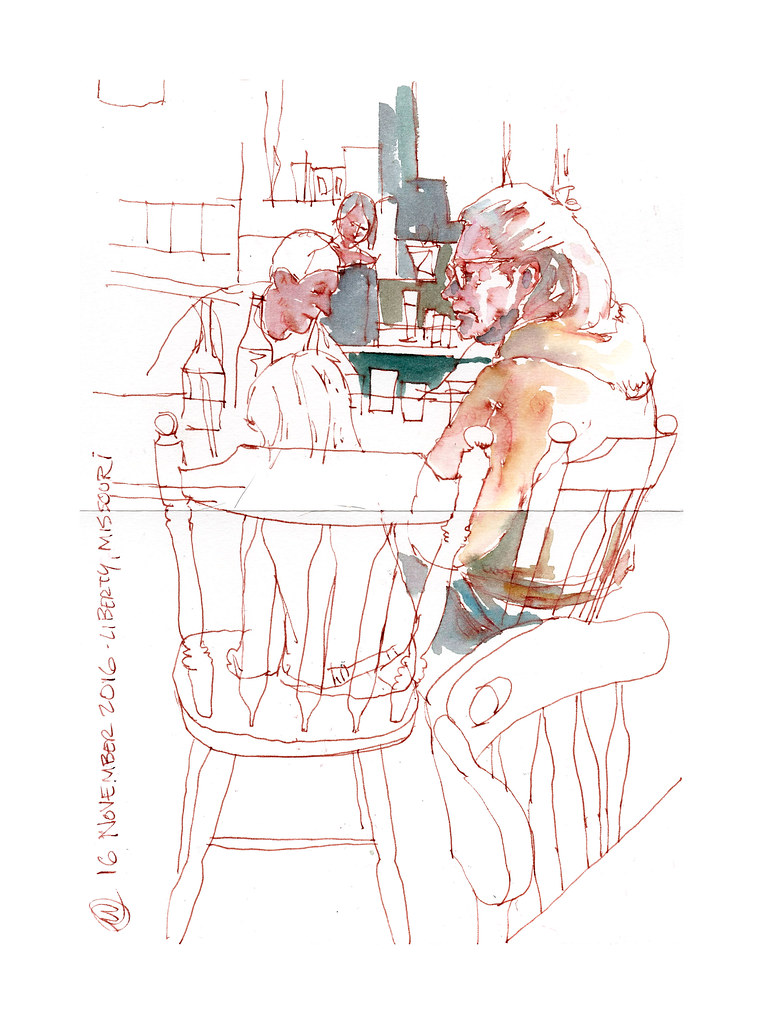 16 November, 2016. You heard it here first: I love the funky little hippy joints, those hole-in-the-wall places with both eclectic people and food. OK, most of these places are populated with folks in search of coffee and an endearing seat in which to enjoy their cup. Personally, I hate the stuff, but the places themselves are great for observing a diverse populace. 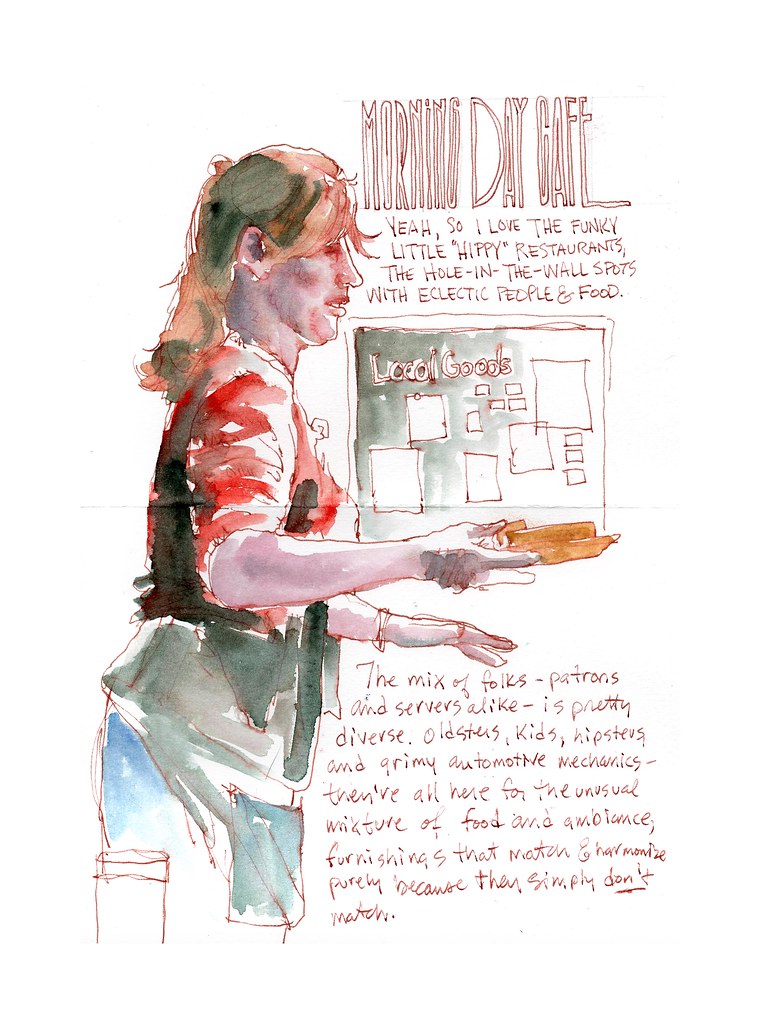 Keeping things loose – especially the application of paint – is the best part of these sketches for me. After nearly four decades of splashing watercolor around on paper, I finally feel like the paint isn’t fighting with me. Too, the earth tone pigment of the inked line work seems to hold things together, the warmth is much less harsh than the black I use when I sketch with brush pens. (Lamy Safari medium nib fountain pen, Noodler’s Ink (Beaver), watercolor wash, on Strathmore Aquarius II watercolor paper.) 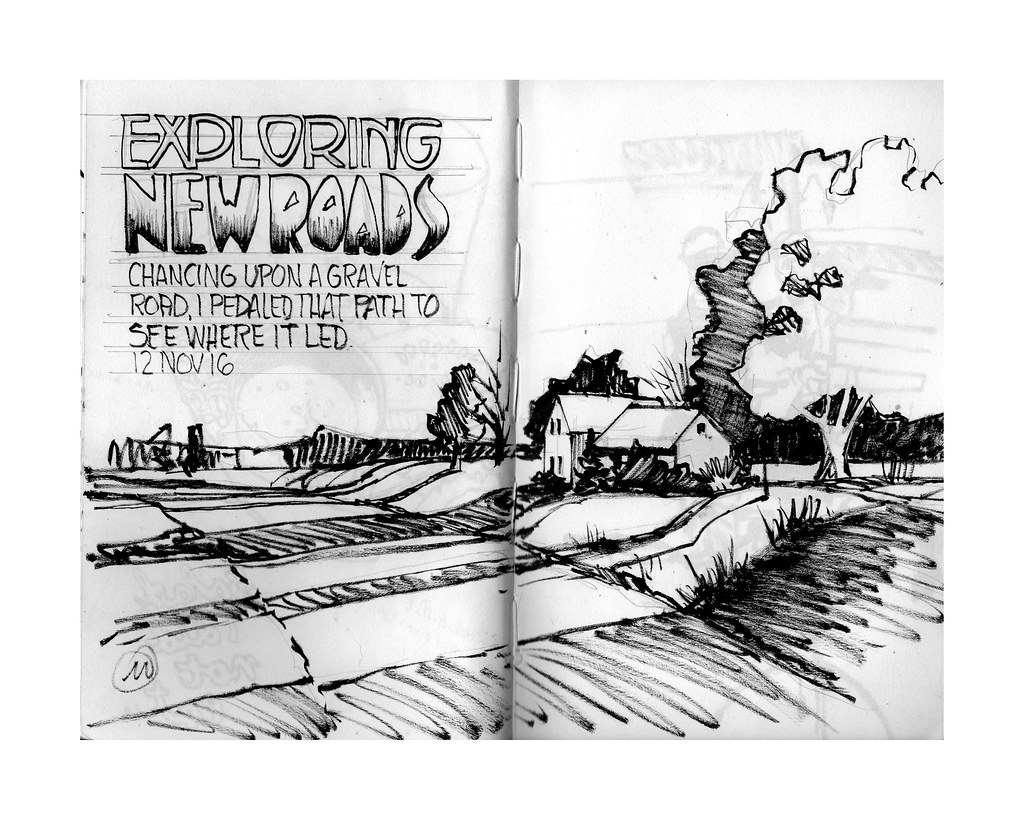 12 November, 2016. Chancing upon a gravel road, I pedaled that path to see where it led, round tight corners bordering Missouri River bluffs and through farmlands pretty and cozy and nestled and hidden. Between fields I rode, flanked by ponds and streams; horses, livestock, and waterfowl were my neighbors, and one cowboy rehearsing with a lariat, a young steer his understudy. Up and over very steep hills, I climbed and panted; my breathing at times labored as my wheels reached each summit. And yet the November air brought forth a growing chill in the waning afternoon light.

I was traveling light, a sketchbook and pen and lead holder my only tools. The colors, though, were wonderful and I regret not bringing along watercolor. (Rural Clay County, Missouri; Kuretake No. 40 brush pen)

6 November, 2016. Well, I ran out of ink almost immediately at yesterday’s Tweed Ride, but I still had my lead holder. I quickly roughed in a few of the people with graphite, and inked them this morning with a Lamy Safari fountain pen. I debated about adding color throughout the entire thing. Maybe I’ll do so, but I kind of like the unfinished look. (Lamy Safari medium nib fountain pen, Noodler’s Ink, Strathmore Aquarius II watercolor paper; Kansas City, Missouri.) 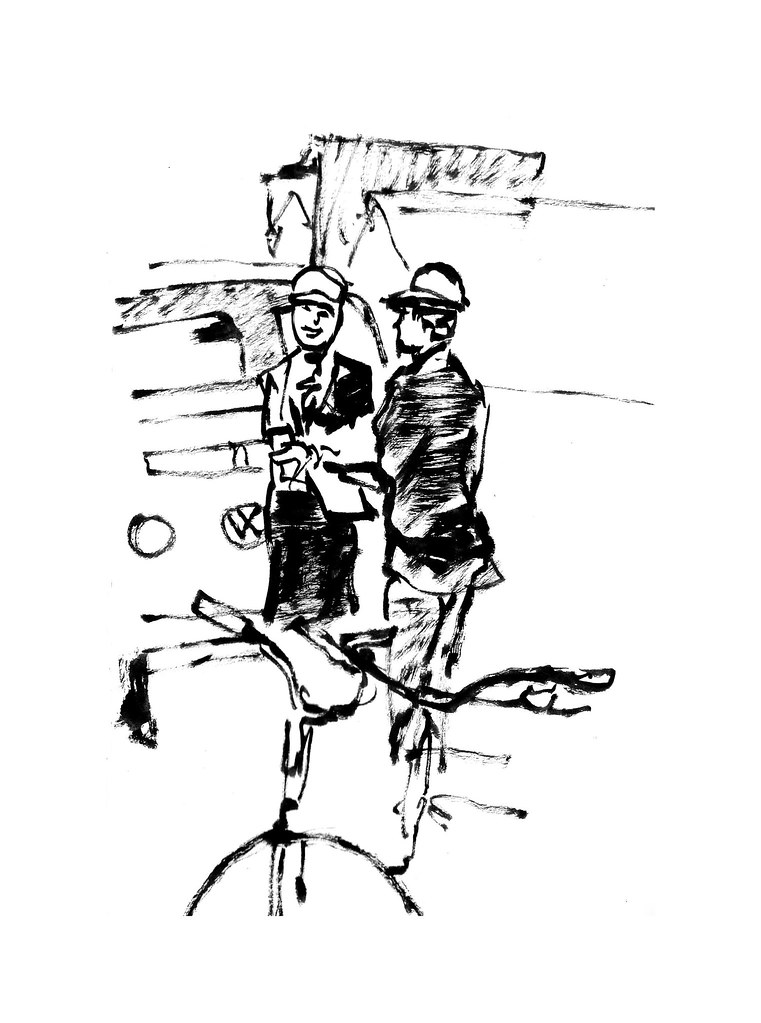 5 October, 2016. This year’s Tweed Ride was fun, but just a wee bit disappointing. Why? Well, I sure wish there had been more vintage bikes on hand – other than my own, of course. Modern bikes and dress up. Hmmm. 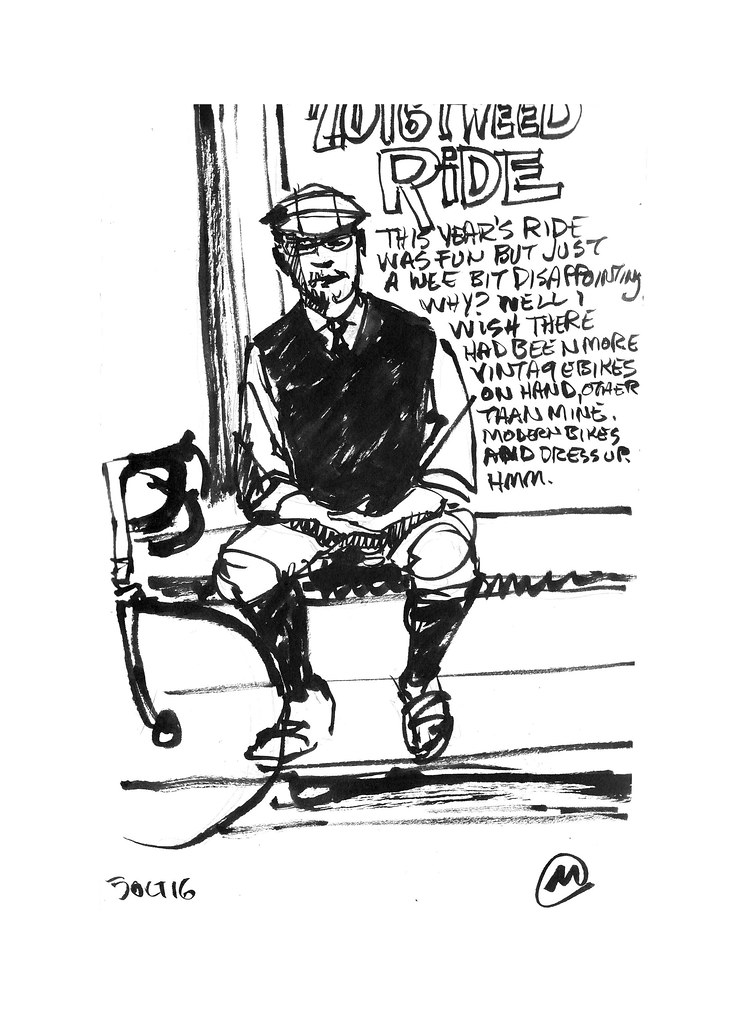 I do look forward to this event though. It’s fun to get out and ride one of my vintage bikes, get all duded up in something resembling period attire, and join a group of others of similar mind. This annual ride is sort of turning into a hip, fashiony event. But still cool. Folks are out on bikes, enjoying themselves and the day.

My bike of choice today was a 1946 Hobbs of Barbican. It’s a fixed wheel time trial bike. Staying true to the form of the time I was dressed head to toe in black as British time trialists would have done in the 30’s and 40’s. (An alpaca jacket would have been required – which I don’t have. Fortunately, it was a warm day so no harm, no foul.) 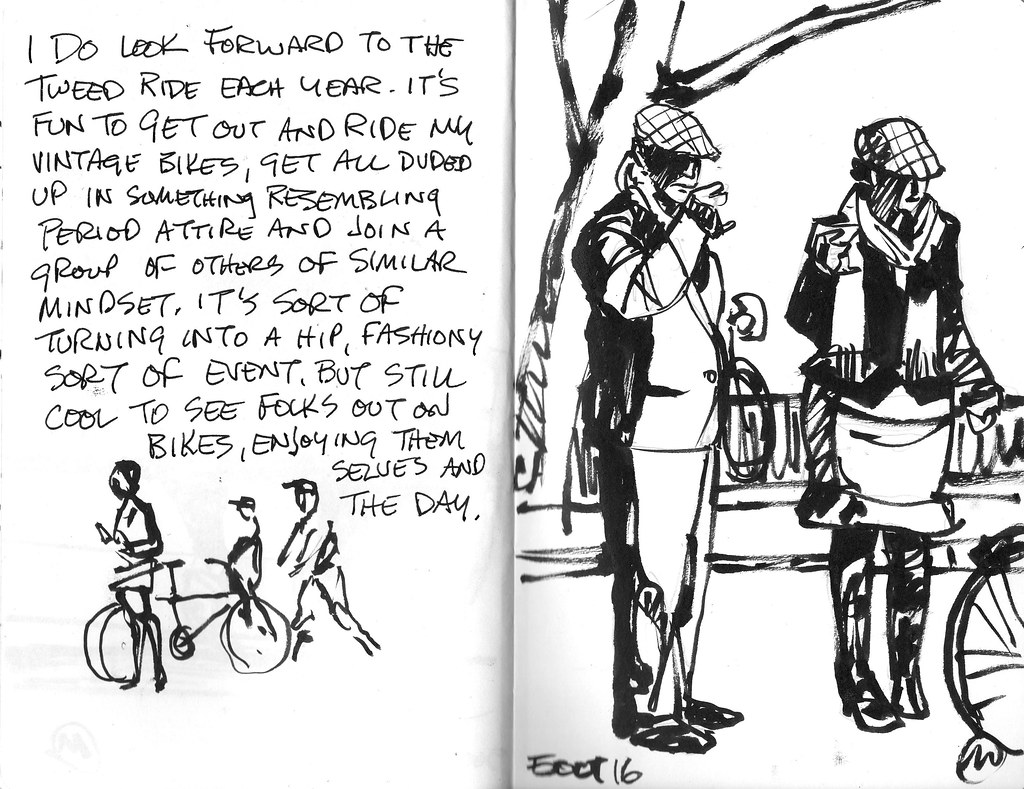 I arrived early, hoping to get in some sketching. Unfortunately, I found out the damn ink was running low in my pen.