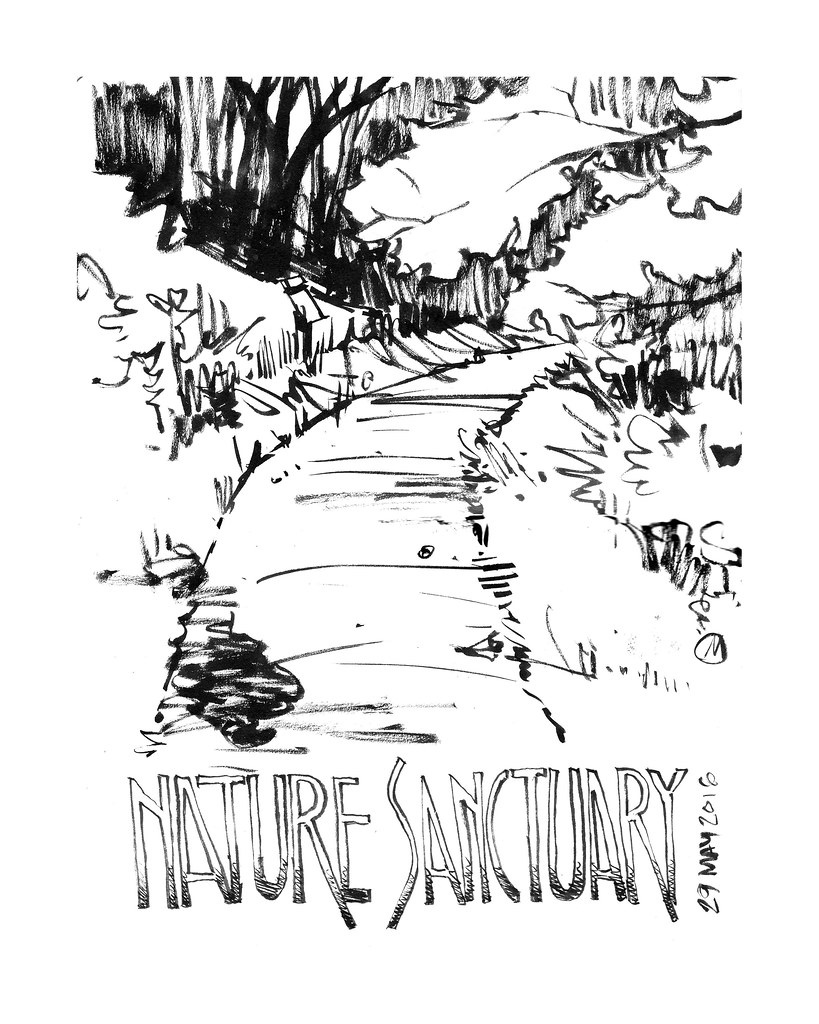 28 May, 2016. I’ve been chomping at the bit to get outside and draw this week. We’ve had an incredible amount of rain, coupled with thunderstorms and a few tornado scares – none of which seems especially conducive to outdoor sketch booking! Mother Nature gave us a little break yesterday, and a bigger one today, leaving me with the opportunity to toss my kit into a bike bag and strike out for the backroads of Clay County. Today has been particularly nice and at one point I found myself enjoying a quiet, shady bench at Martha Lafite Thompson Nature Sanctuary. I seldom stay in one locale for very long: Two quick sketches, and I was on my way. 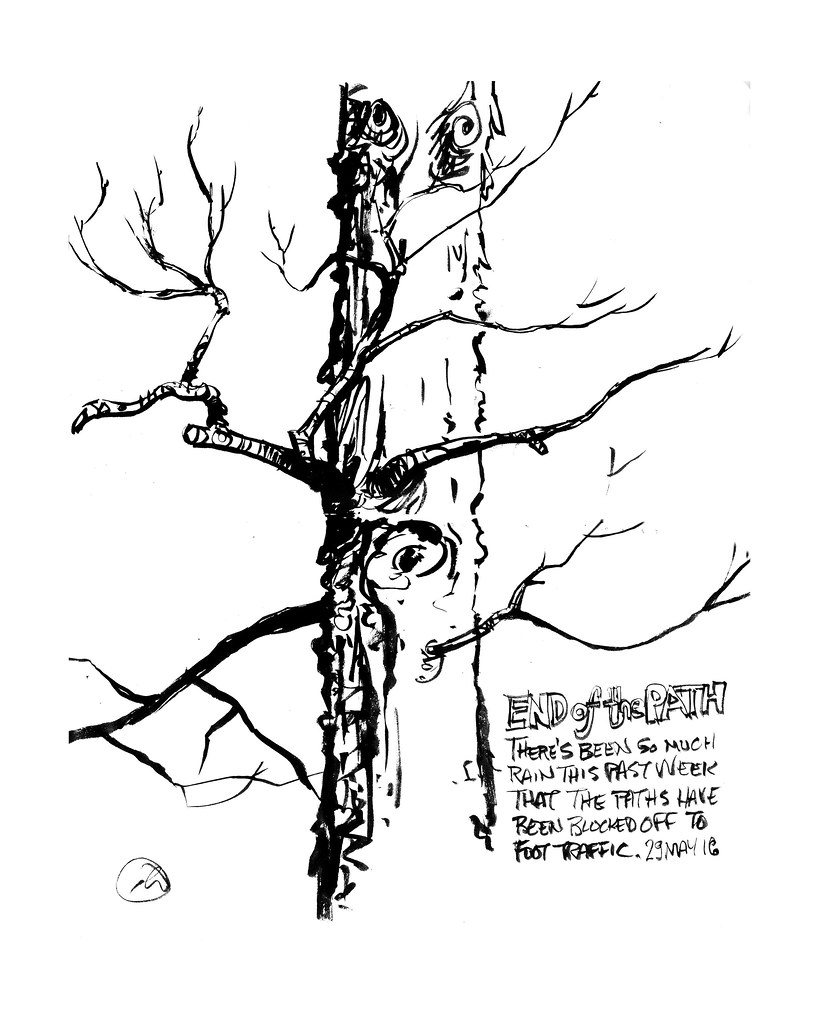 There are quite a few hiking trails within the borders of Martha Lafite, some paved and others a more rudimentary dirt path. The rain has been so intense that most of the unpaved paths are currently cordoned off to avoid certain trail destruction due to foot traffic through well saturated mud. My bench was located at the junction of a place where the pavement ended and the (blocked off) pathways began. I’ve written before about the Kuretake No. 40 brush pen that I’m currently carrying with me these days. I’ll simply re-emphasize the fact that I really enjoy sketching with this pen and leave it at that. 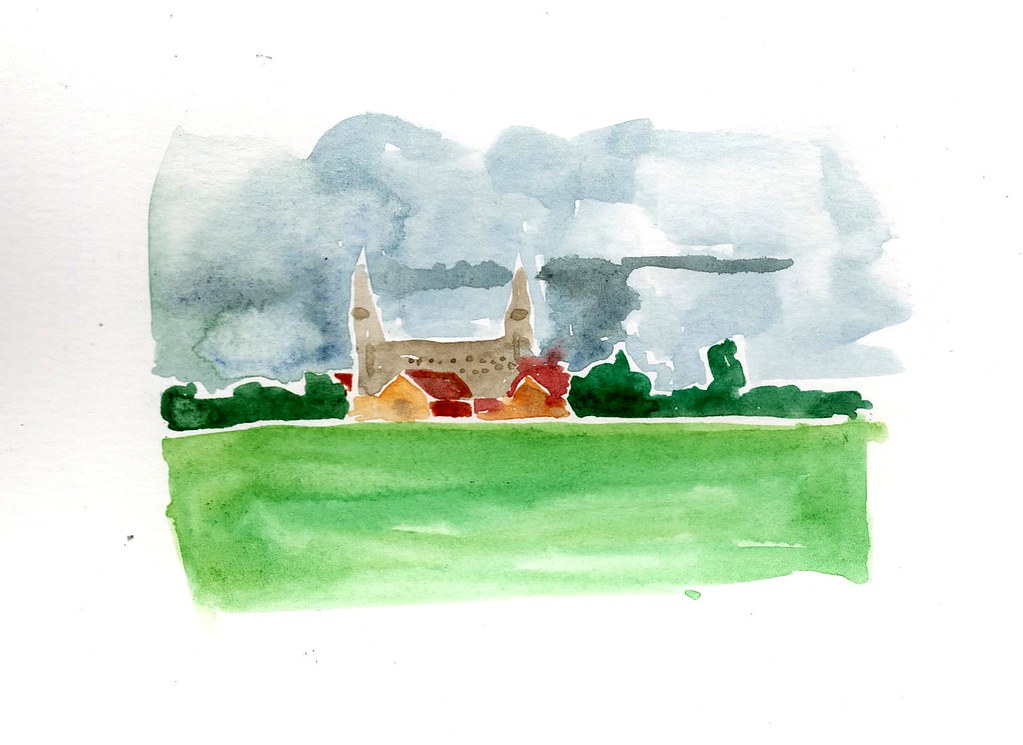 Yesterday morning was cool and gloomy and still heavily overcast from the previous night’s storms. Riding though a little more suburban area, I crossed a highway overpass near a cathedral. Digging into my bag I discovered I had somehow left my drawing instruments at home (on my drawing table, as it turned out.) So a very quick watercolor sketch on a 4 x 5 inch card of Fabriano Studio CP watercolor paper was the order of the day. Quick, loose, and nearly cartoonish – still, I feel like it gets across the idea of the prevailing weather conditions. (Top sketches: Kuretake No. 40 brush pen, approximately 5 x 7 inch page size on two-page spread, near Liberty, Missouri. Bottom sketch: Holbein watercolor and Koi water brush on Fabriano Studio CP wc paper, Kansas City, Missouri.) 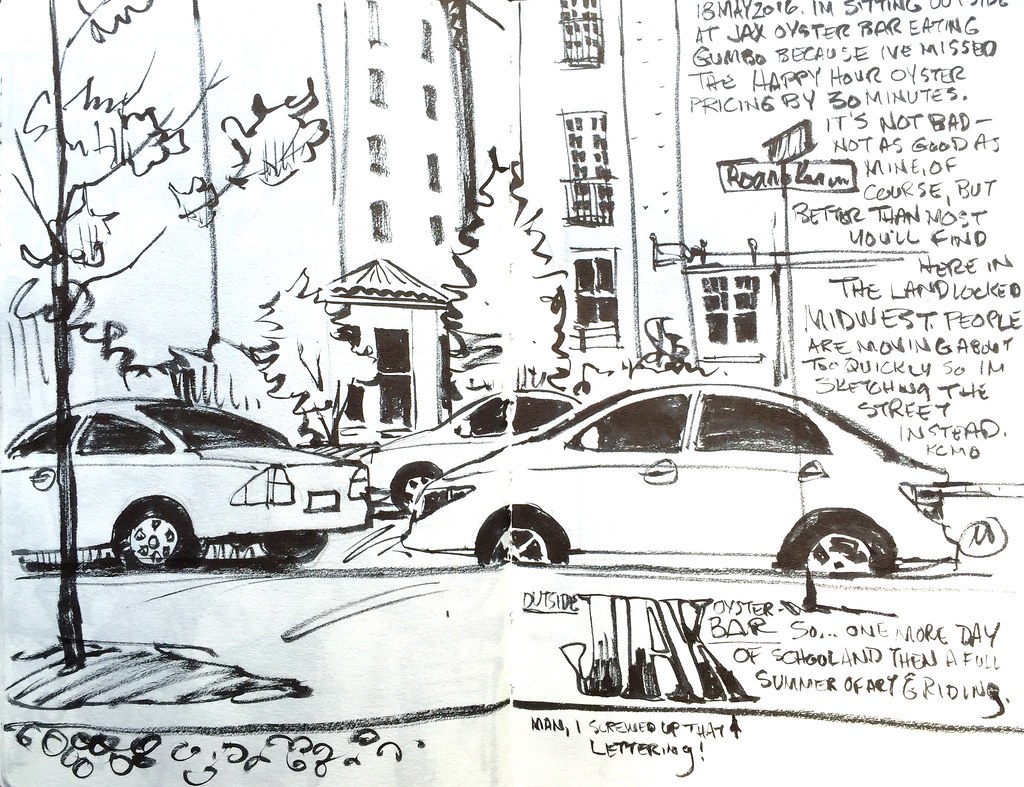 23 May, 2016. While cycling through the countryside this morning I conducted a very informal test in color acuity: How many colors could I spot that could be recreated from a nearly raw pigment, and does blue actually exist in nature? Not surprisingly, the world is an abundance of greens at the moment and I found myself identifying Sap Green, Windsor Green, even Pthalo Green. Certainly nothing resembling Viridian though. Lemon Yellow Light, Cadmium Yellow, Magenta, Yellow Ochre, Raw Sienna, Burnt Umber, Raw Umber, Burnt Sienna. A few instances of pure red were noted, but mostly hues with cooler notes of Quinacridone or warmer flourishes of orange. Fewer still were the cool colors. Some floral accents of violet. But no blue at all. Nothing. Nada. I read an article recently in which the premise was that “until relatively recently in human history, ‘blue’ didn’t exist.”How silly, I thought. But read the story yourself. The writer makes a pretty compelling argument. And while I won’t rehash his points here, I will say that his article has made me take a new look at the world around me. Perhaps I’m not as observant as I thought myself to be. And perhaps an hour or two of idle thought will lead me to reconsider how I approach color in my sketches.

Friday marked the last day of the semester for my students and me. Winding down the school year always leaves me with far less time to make art than at any other time. The silver lining is that I’ll have the next several weeks to indulge myself with drawing and painting, and to recharge for my next group of young artists. A few days ago I visited Jax Oyster Bar for a beer and small plates. The bar was full and although still a bit cool, I requested a table outside. The patio was pretty much all mine and while nursing a glass of KC Bier Dunkel I put together a two page sketch of the cars and structures that overlooked my table. From time to time patrons would venture outside for a few minutes fresh air. One group of women – fellow teachers as it turned out – saw me sketching and came over to chat and rubberneck a little as I scribbled lines in my sketchbook. I’ve grown accustomed to the curiosity of others, and occasionally curiosity crosses over to brazenness. (Is that even a word?) This was the situation with one woman in the group, who chatted me up and eventually gifted me a sketch of her own. 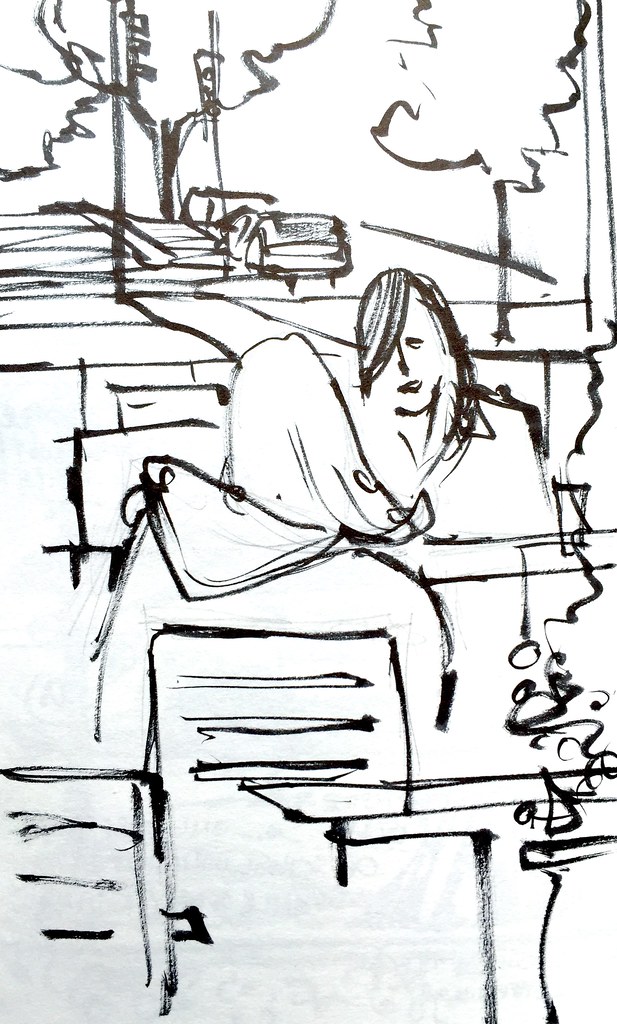 Perhaps I wasn’t attentive enough. After a while they moved on to claim a table of their own. Having finished my first sketch, I managed to make a hurried drawing of a couple of them. 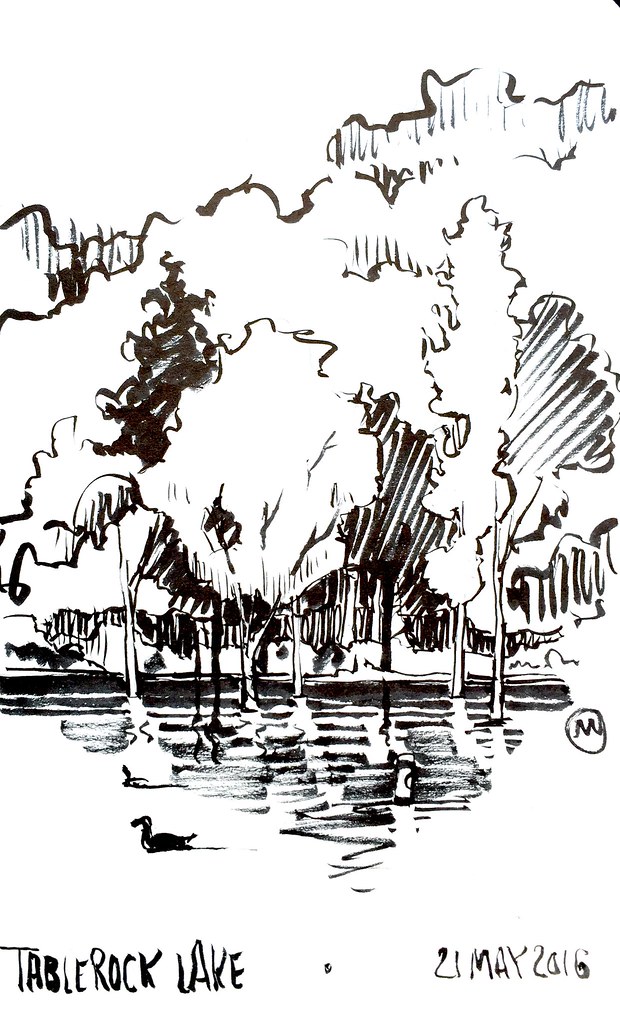 The next day we drove to the house at Table Rock Lake. Sitting on the dock, I read for a while and sketched out a loose interpretation of the trees across the cove. The only kit I brought with me was a brush pen and lead holder. 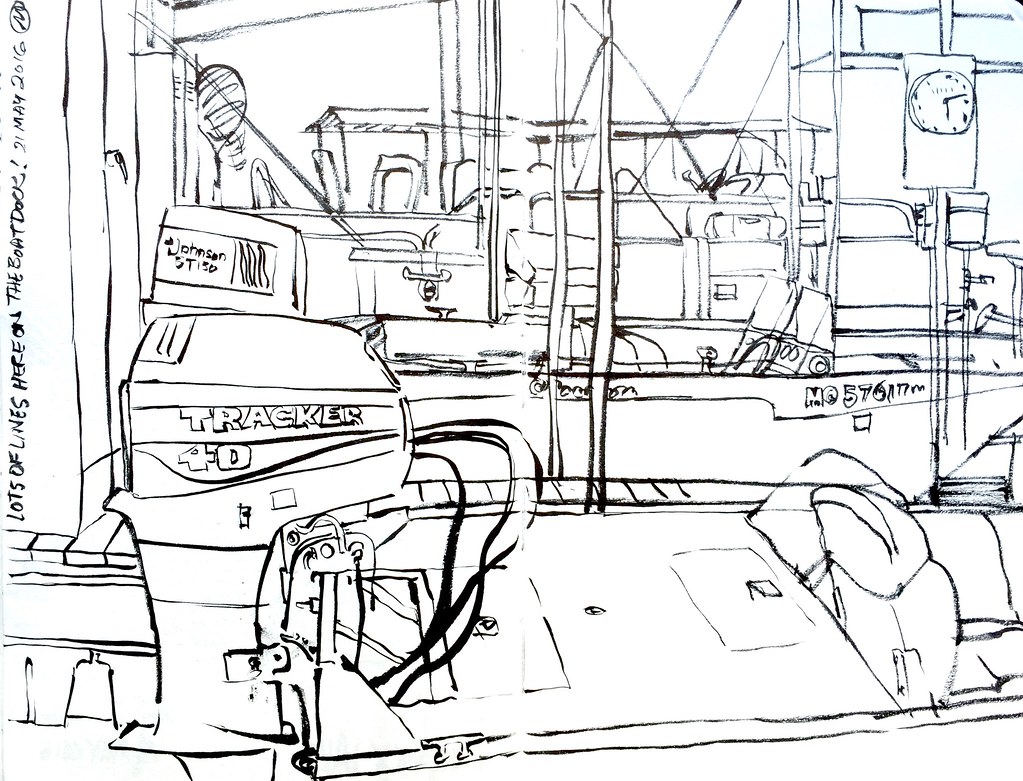 I’d been sitting at the end of the dock, with a view of the cove and the main channel, rolling hills of green surrounding me, turkey buzzards and a couple of bald eagles hovering above. I don’t enjoy sitting in the direct sunlight. It forces me to squint, which makes reading and sketching more difficult. So as the shade from the roof of the dock moved, so did I. Under cover of the roof, I turned my chair to the boats sheltered beneath. I suddenly realized the scene in front of me was a medley of horizontal, vertical, and diagonal lines. Not my usual cup of tea, but one draws what one sees. (Kuretake No. 40 brush pen) 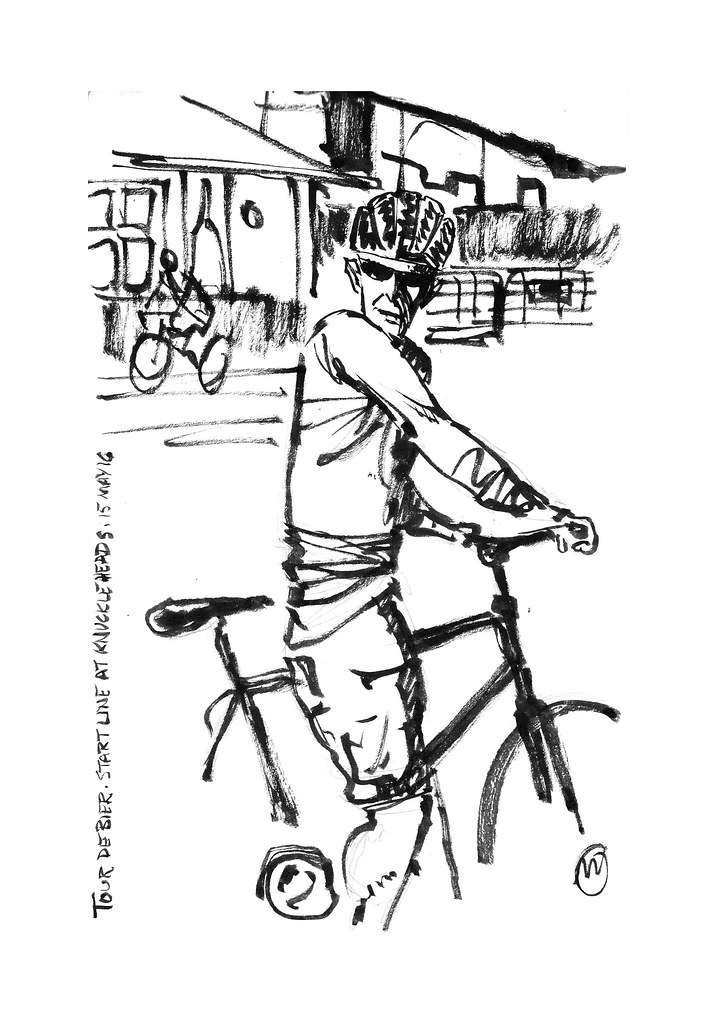 15 May, 2016. I enjoy sketching people and places. Bike rides tend to bring out a lot of different people on different kinds of bikes, which is a good opportunity to draw different body types. Today was the annual Tour de Bier which begins and ends at a terrific blues bar called Knuckleheads. Riders arrive a few at a time for a mass start. One and two at a time they line up, and before long there are hundreds of us. 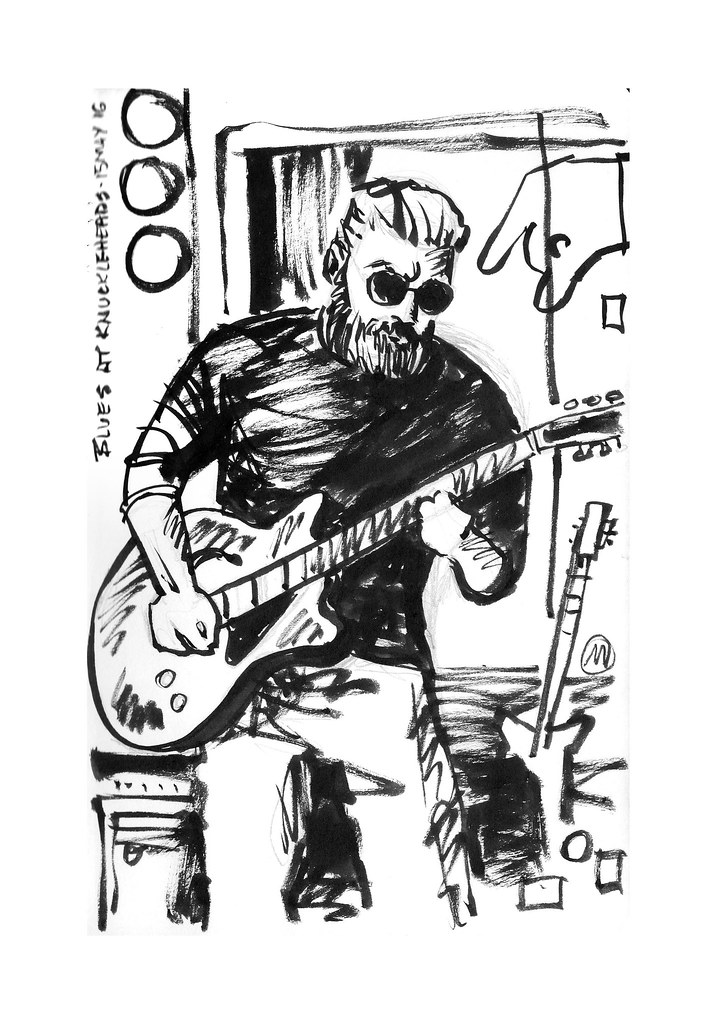 One of the reasons I look forward to each year’s Tour de Bier (well, aside from the beer) is the great blues bands that are up on stage at Knuckleheads at the end of the ride. (Kuretake No. 40 brush pen, approximately 5 x 7 inches, Kansas City, MO)

10 May, 2016. I’ve been carrying around a Kuretake No. 40 brush pen for the past few days, actively looking for the opportunity to try it out for sketching. Probably not the best idea to do so as the semester is winding down, but what the hell!

Here are a few of my initial reactions: 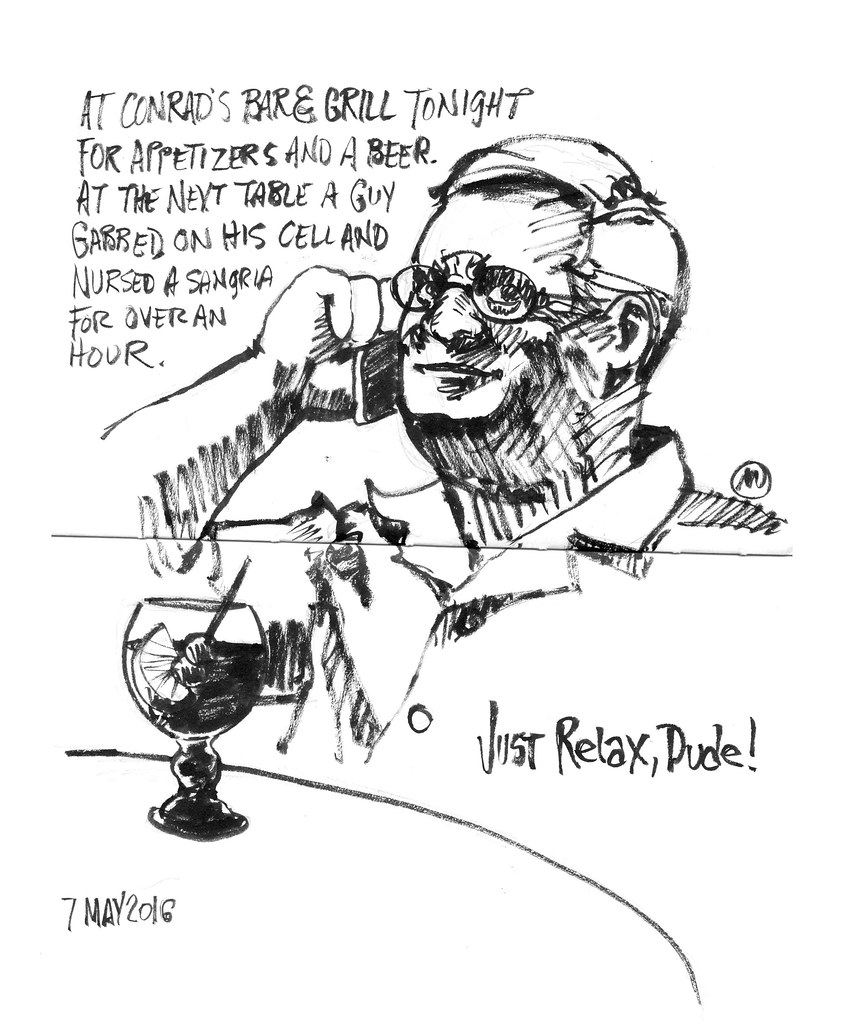 Keep the main subject larger on the page than I might normally draw with my Lamy Safari fountain pen. There’s a real advantage to using this brush pen when the active sketcher works large enough to see a pronounced contrast and variety of line weights. 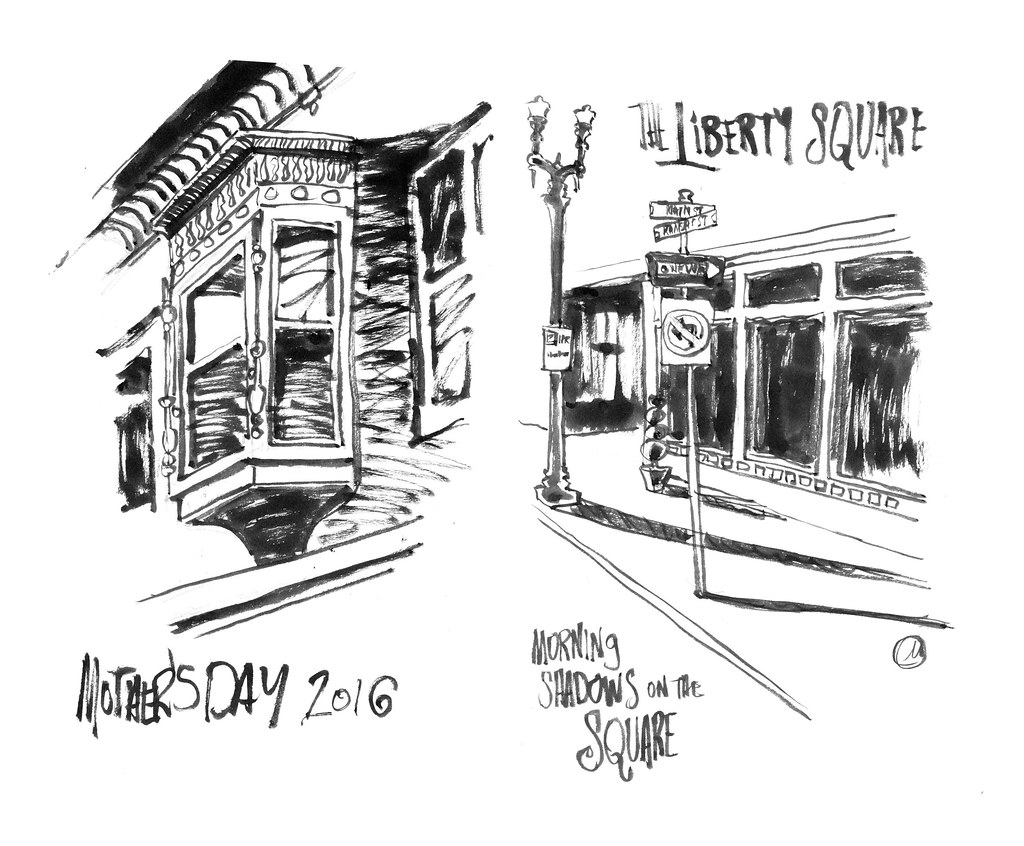 Encourage the dry brush effect! Combined with the dark, crisp lines, I think there are all sorts of possibilities when the active sketcher works fast with this brush pen. The marks take on a gray tonality in places, incomplete in others. This may be a product of using a sable brush point rather than something synthetic – regardless, this aesthetic appeals to me. 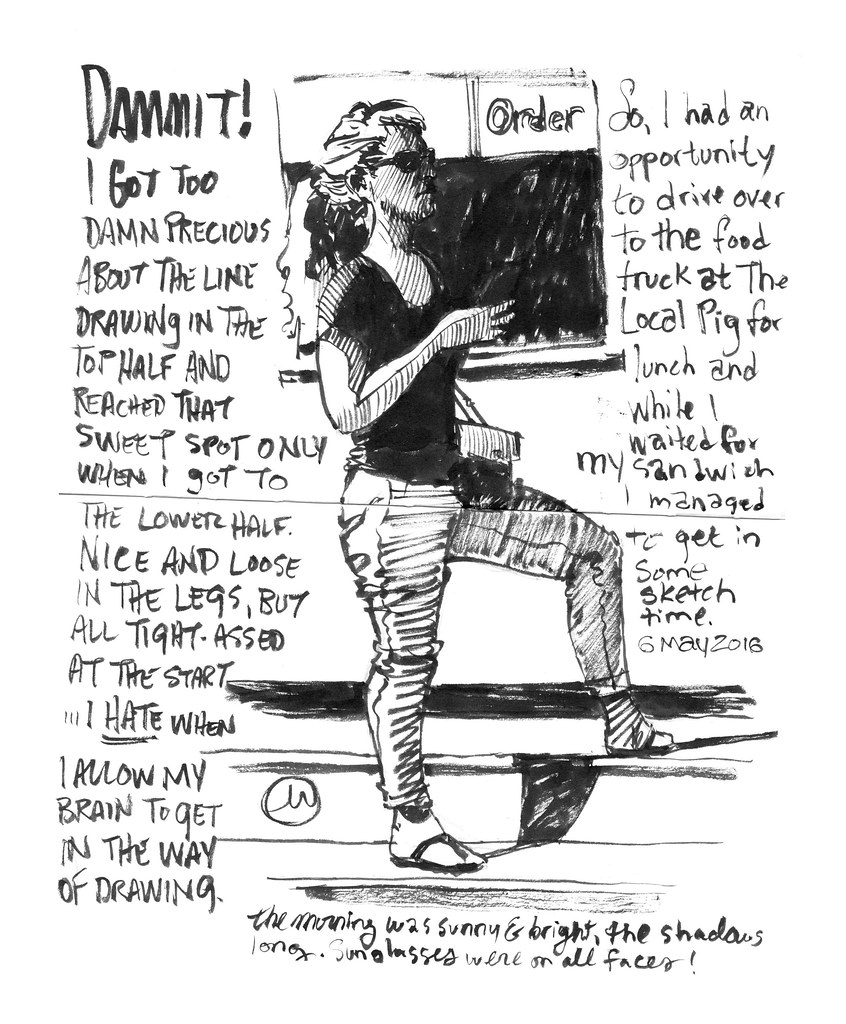 Keep the line work loose – this is not the right tool for preciously drawn hatching, but scribbling tends to look good when fast strokes can out nicely grayscaled dry brush-type effects. Much as happened with the Pentel Pocket Brush Pen, as I grow more comfortable with the drawing instrument the lines themselves become more confident looking and energetic. (All sketches with Kuretake No. 40 sable brush pen, approximately 5 x 7 inch page size.) 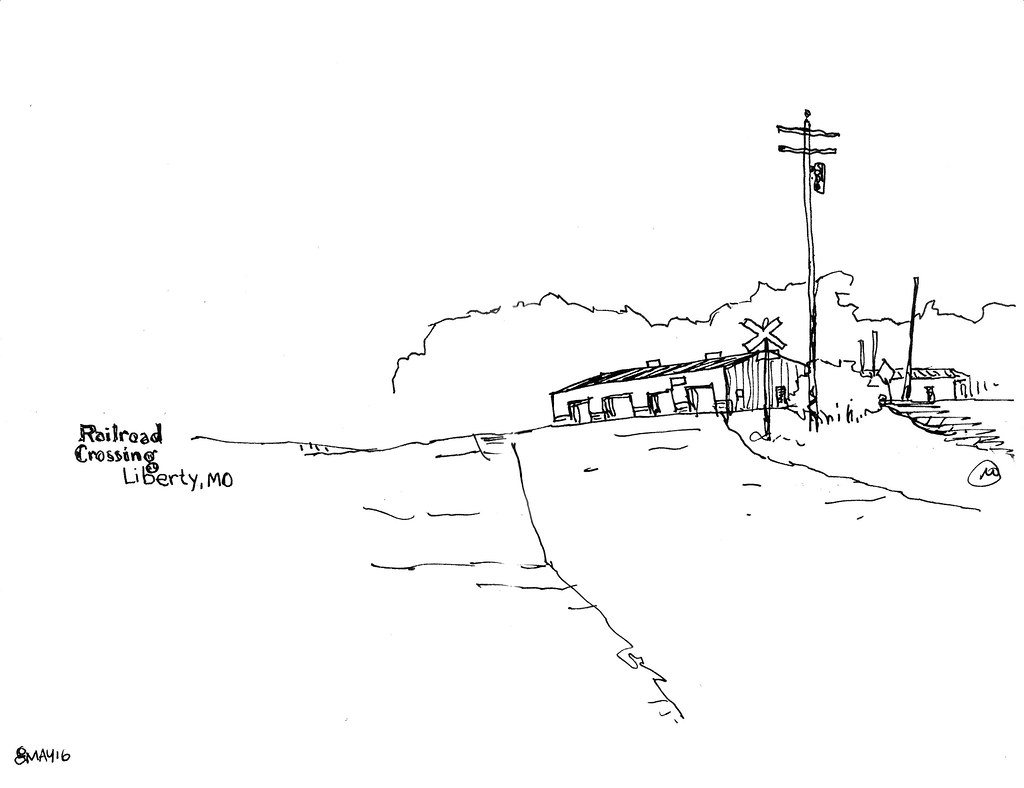 8 May, 2016. Really, there’s not a lot to say about these sketches. It was early morning on Mother’s Day and I hit the road on my bike just as the sun was cresting the horizon. The morning was cool, but thick with a fair amount of moisture in the air. Because of that I left the watercolor kit at home and stuck to pen and sketch paper. Both sketches were made from the same location, the only difference being my vantage point: the top sketch was facing the rising sun in the east, the bottom sketch was my view to the southwest.

I once met a plein air painter who authoritatively claimed he could be plopped down without any thought whatsoever, in any location whatsoever, and proceed to make legitimate paintings. I love that idea, quite frankly. Philosophically, I feel that the design is out there, everywhere, just waiting to be identified and sketched. Not precious, at all – neither here nor there, but literally everywhere. (Lamy Safari medium nib in Canson 180 sketchbook, approximately 5 x 7 inches.) 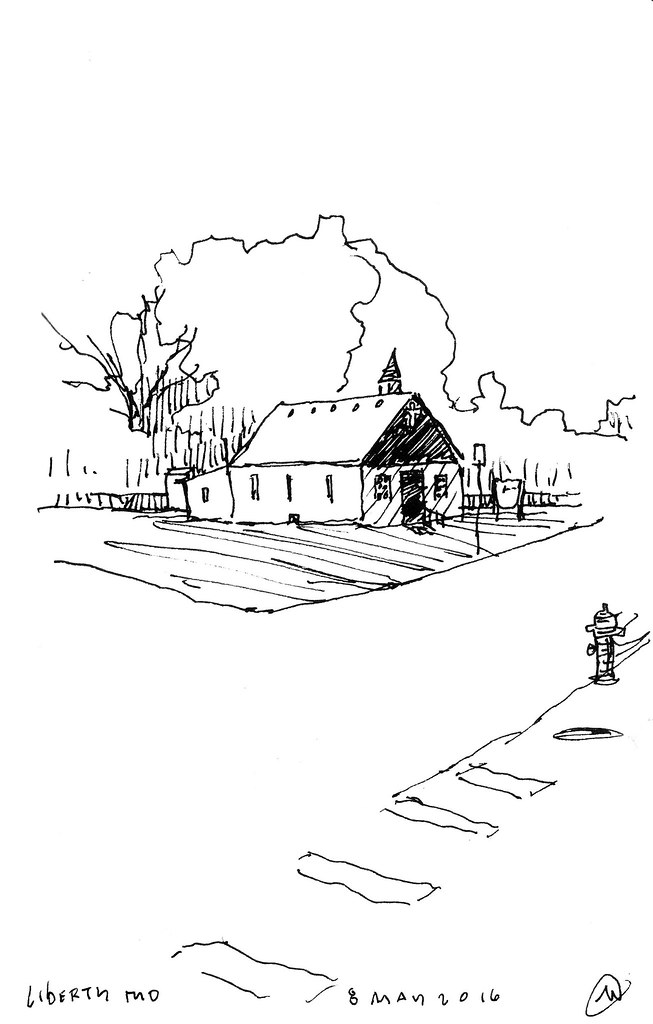 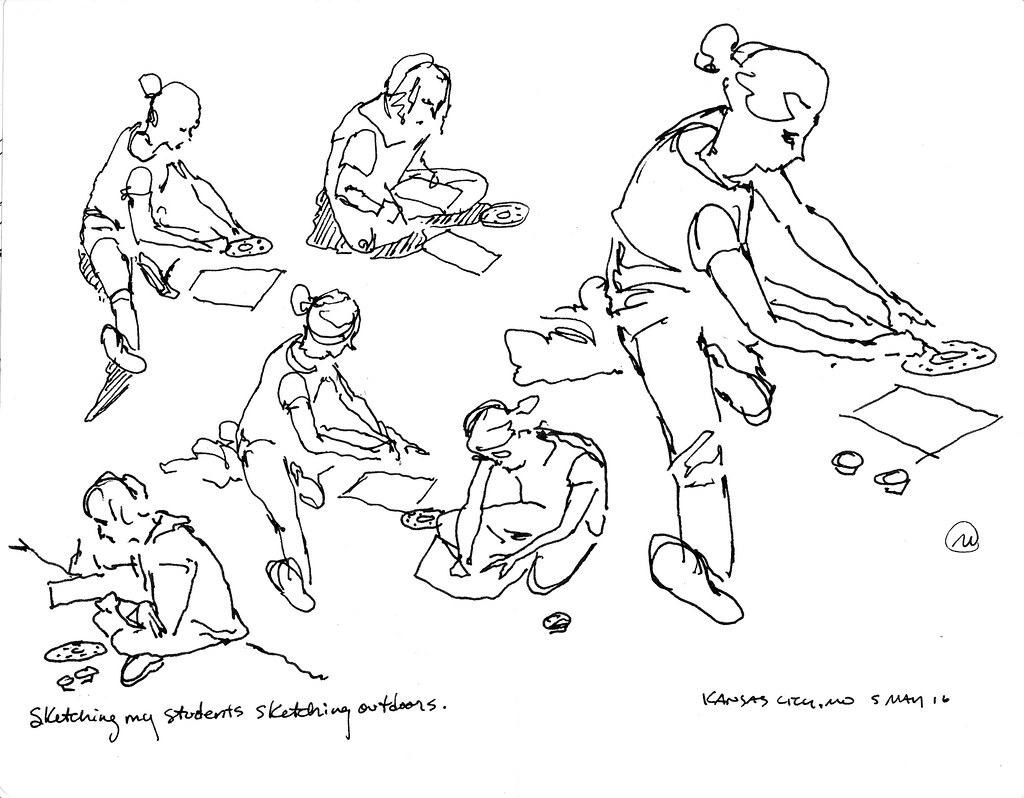 6 May, 2016. Spring semester is winding down and summer break is cresting the horizon. Teaching art is wonderful and exhausting both at the same time, sapping and draining nearly every energy reserve. But it’s worth it watching my kids evolve and discover a part of themselves they never knew existed. Still, and all, it’s exhausting and I need those weeks of summer to recharge, to make my own art, to meditate.

Meanwhile, the opportunity to draw and paint leading up to finals is pretty much catch as catch can. My drawing and painting students are just getting a brief introduction to watercolor because we overstayed our visit with acrylics and simply ran out of time. So while my kids sit outdoors and sketch, I wander around sketching them.