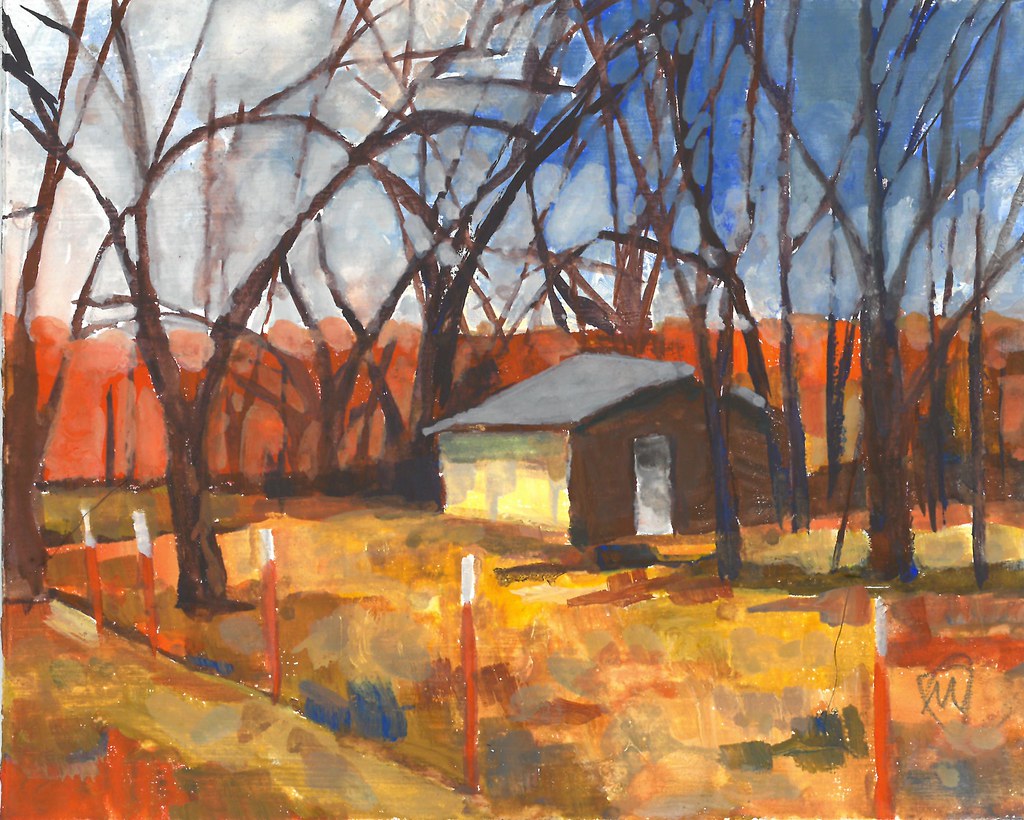 26 January, 2018. After sketching out this scene on a primed 4 x 5 inch piece of illustration board, I decided the color was too garish, too cartoonish. I went back in a few days later to tone down some of the raw color, all the while trying to decide for myself if I really consider gouache to be interesting enough – and let’s be honest, fun enough – to dedicate time toward mastering. Aspects of gouache remind me a little of oil. Attractive as I find that, the jury is still out for me. 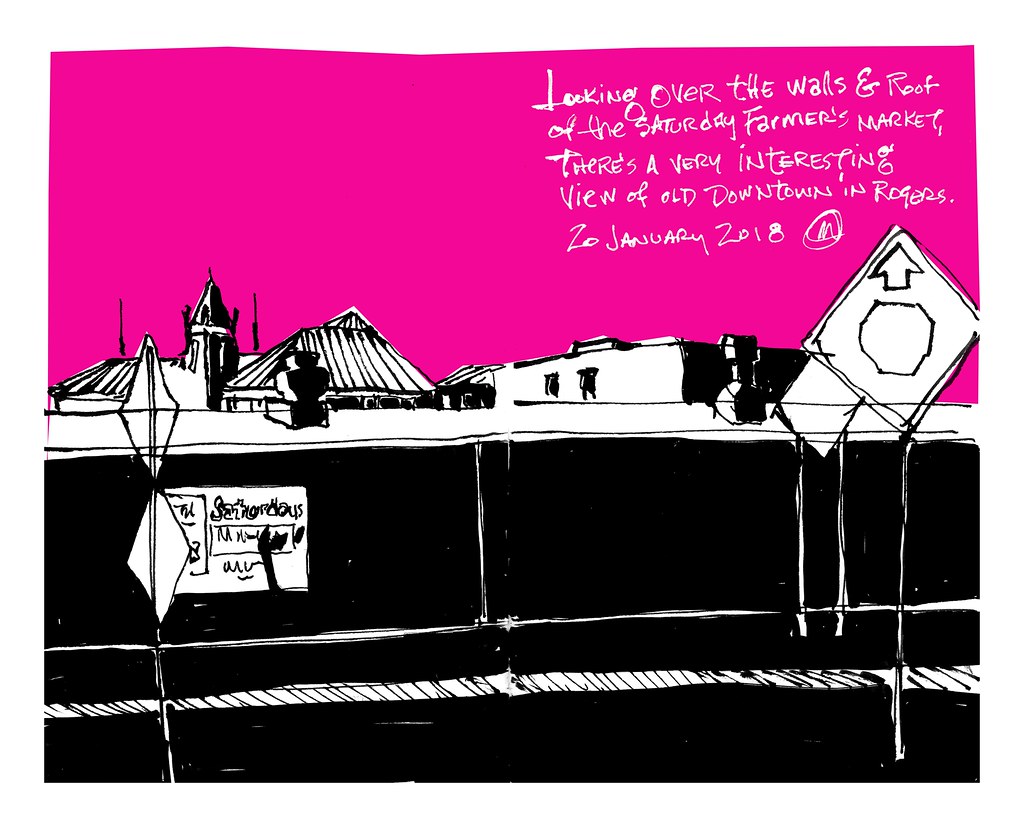 Even when I’m not especially “feelin’ it,” pen and ink just seems to resonate for me, much as watercolor tends to do. —– 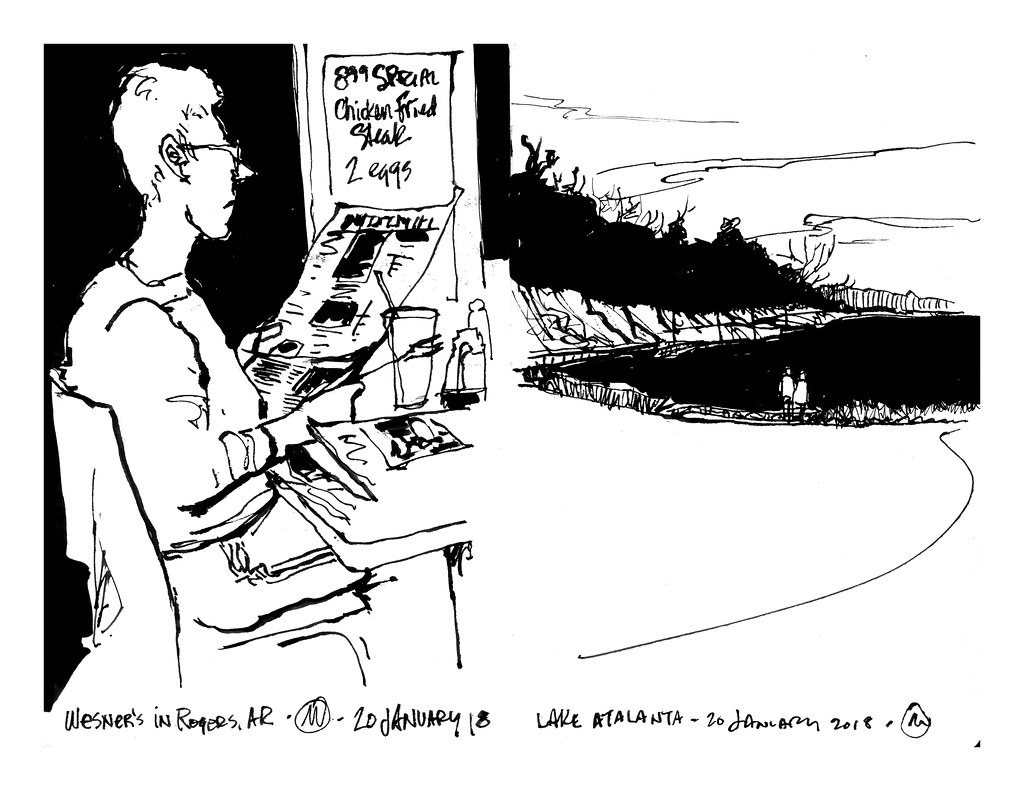 I find it a little bit interesting how the sketches on two facing pages, two entirely different subjects, can sometimes look like they were planned to be a single drawing. That’s what happened here; I like the serendipity and I like the composition that came about by pure chance. 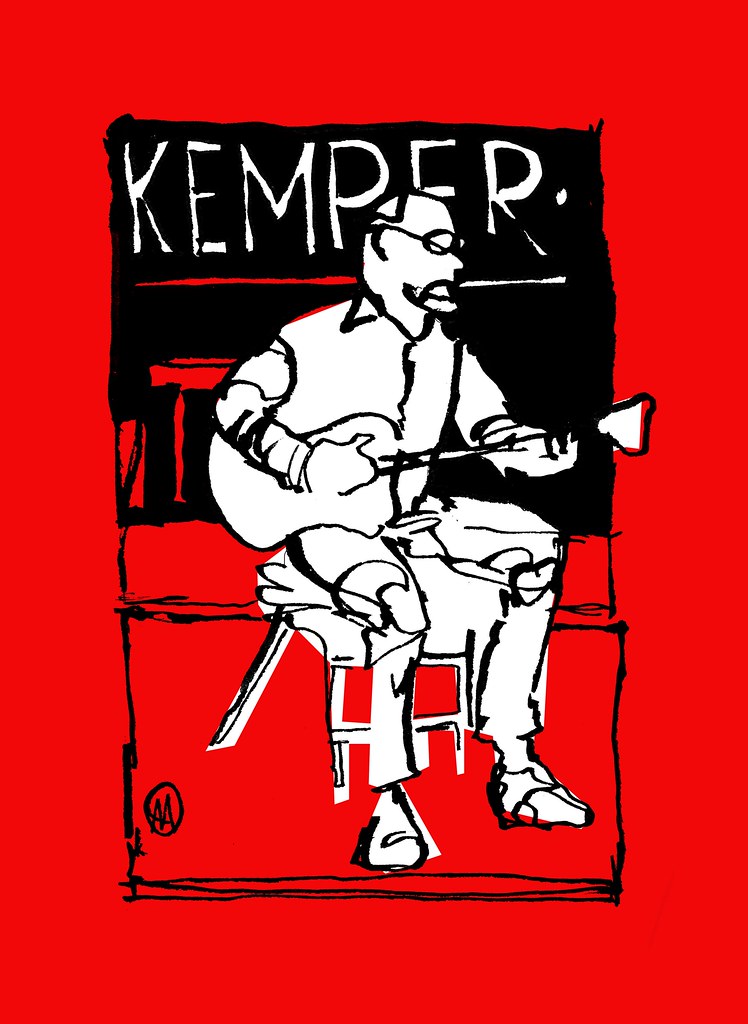 I go through patches where few sketches seem to get made. At such times I have to force myself to get with it again. I did so by making sketches of the Cuban musicians performing at a recent art opening at the Kemper Museum of Contemporary Art. After scanning my drawings I added the color digitally. I really like the mechanical look of the color, which comes off almost like some sort of print making process. It seems to fit harmoniously with the clearly hand drawn look of the line work. 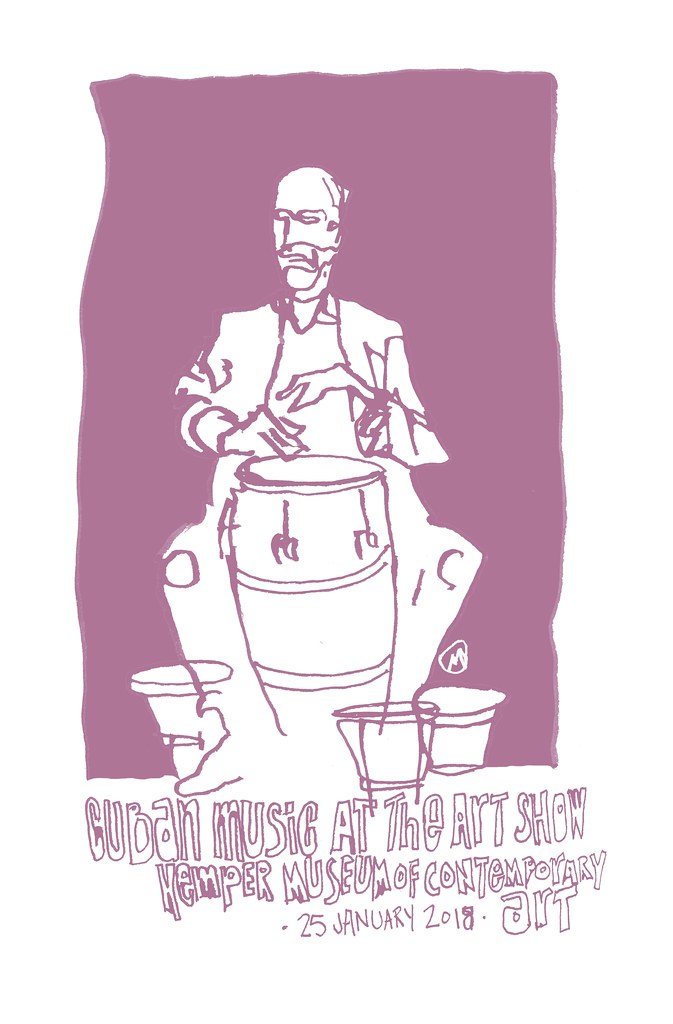 I find myself drawing quite a few musicians performing on guitars, but this is the first bongo player I’ve sketched. I confess to a fascination with the instrument and have secretly coveted a set of drums for many years. 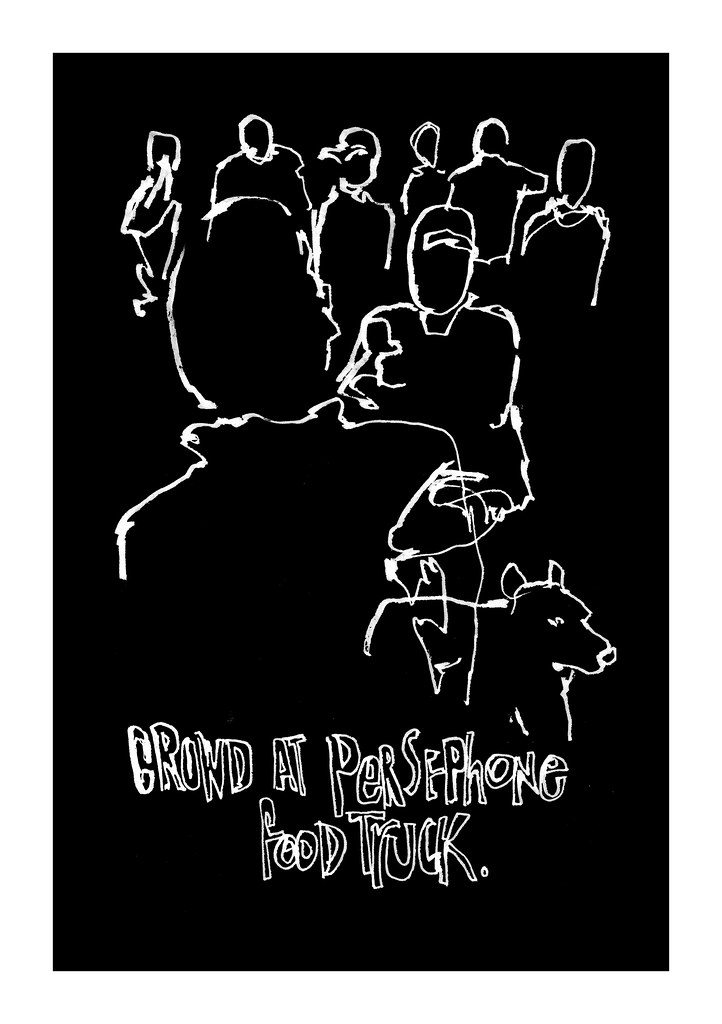 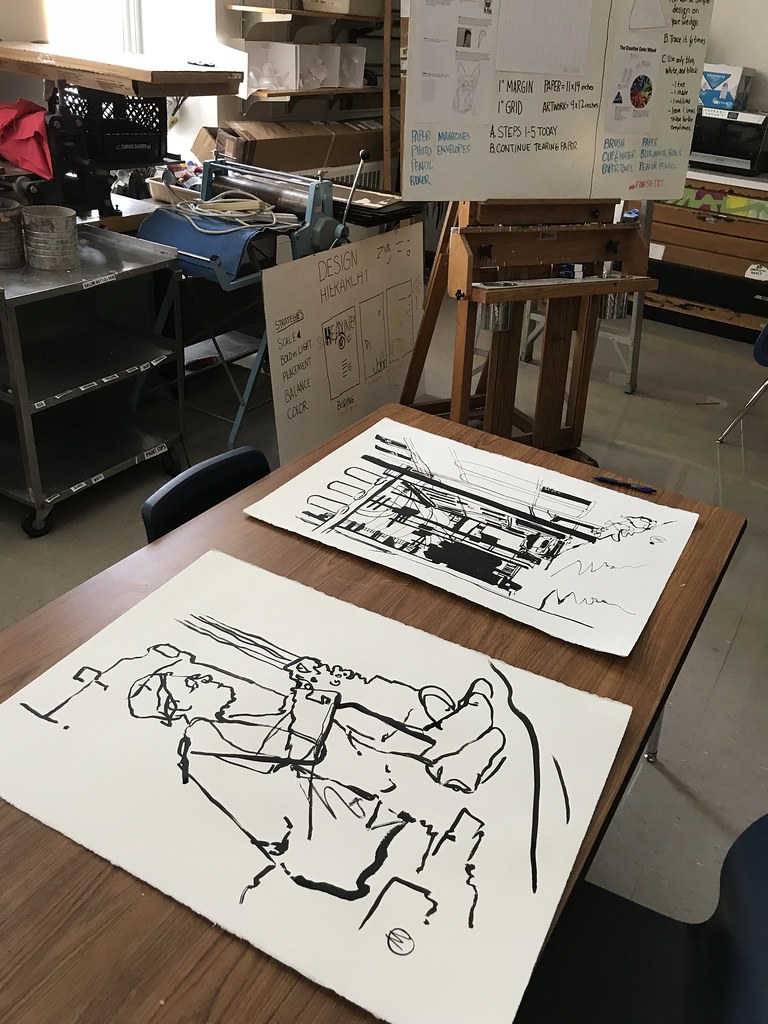 One thing I’ve done in the studio recently that has me feeling enthusiastic is going back to some of my small sketches and working them up again on large sheets of watercolor paper using India ink and a large watercolor brush. The loose line quality is exciting to look at and makes me want to do more large stuff. I’m thinking about making a collage background using found pieces of newspaper and trash from some of my locations, coating it with a clear coat and painting patchy acrylic over it so that only some of the text is still visible, and then redrawing one of my sketches very large and in much the same manner as the two pictured here. 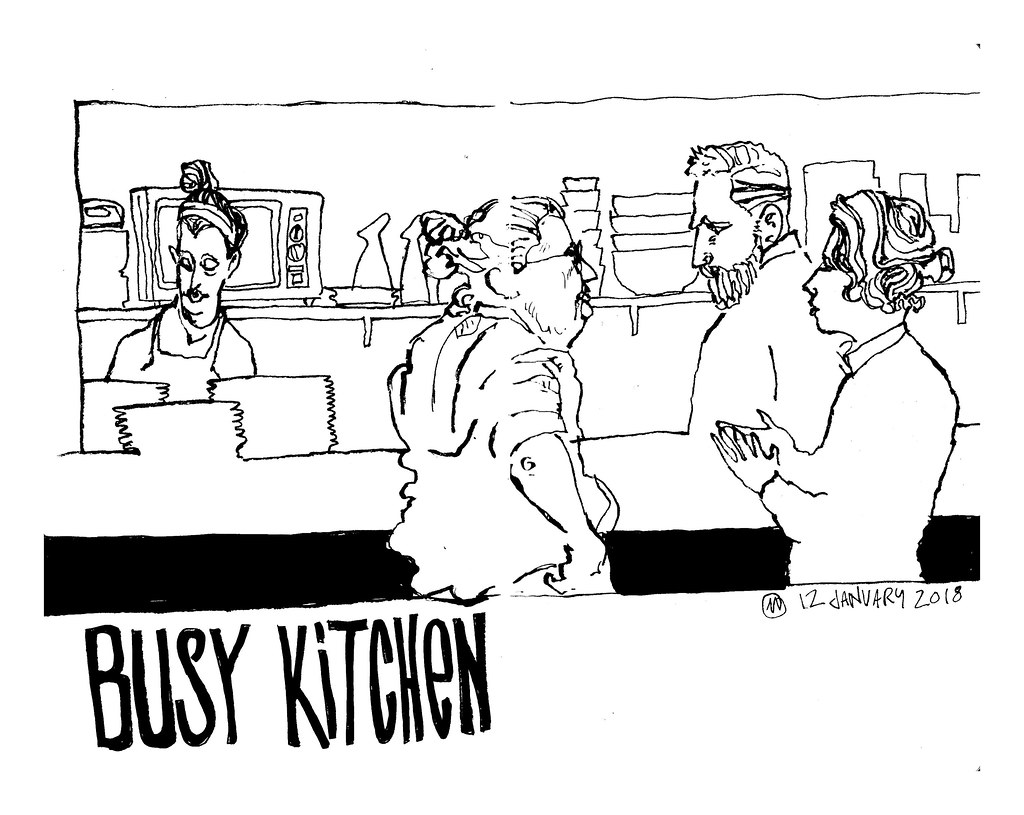 14 January, 2018. It’s Restaurant Week in Kansas City and I’ve dedicated some time with a pen and sketchbook to a favorite subject of mine: observations of the world of dining and  foods. The sketch above, drawn directly as most of my recent sketches are, has been really popular ever since I added it to my Flickr account. I’m very happy with the body language and rendering of the figures, and I’m particularly taken with the two profiles on the right. 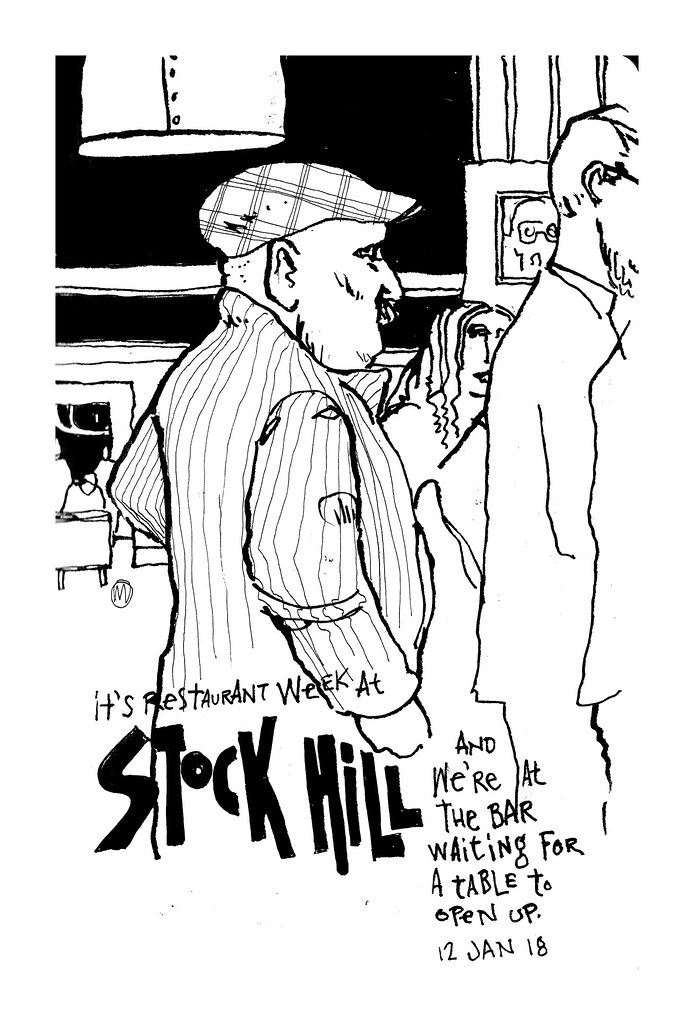 Lounging in a bar can be a great opportunity for people watching, not to mention people sketching. Depending upon how crowded a place is, it also presents an opening for interacting with curious patrons around you interested in checking out your sketches. I find that larger crowds mean more anonymity, and fewer gawkers. Conversely, a quiet setting seems to encourage others to strike up a conversation with a sketcher. 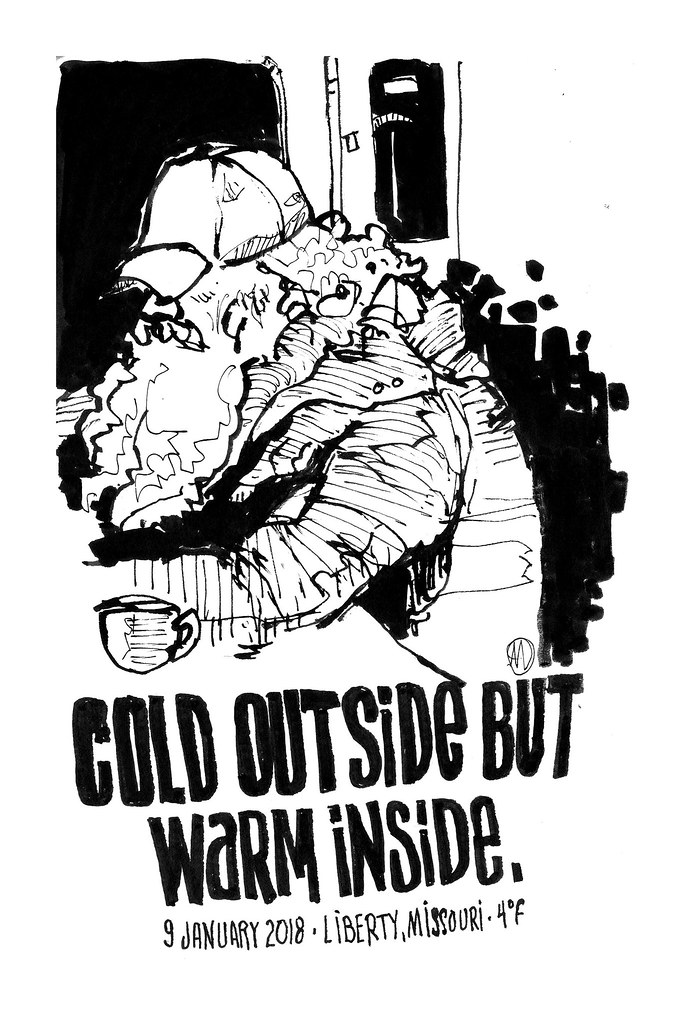 This was an interesting sketch of a fellow seated a couple stools down from us at Rock and Run in Liberty, Missouri. Long, curly locks of white hair and an even longer wavy beard of snow bushed out from under a camouflage ball cap. He was meeting up with a small group of younger people – relatives, I presume – but none were as visually interesting so I left them out of the picture, and thus also from the visual story as well. 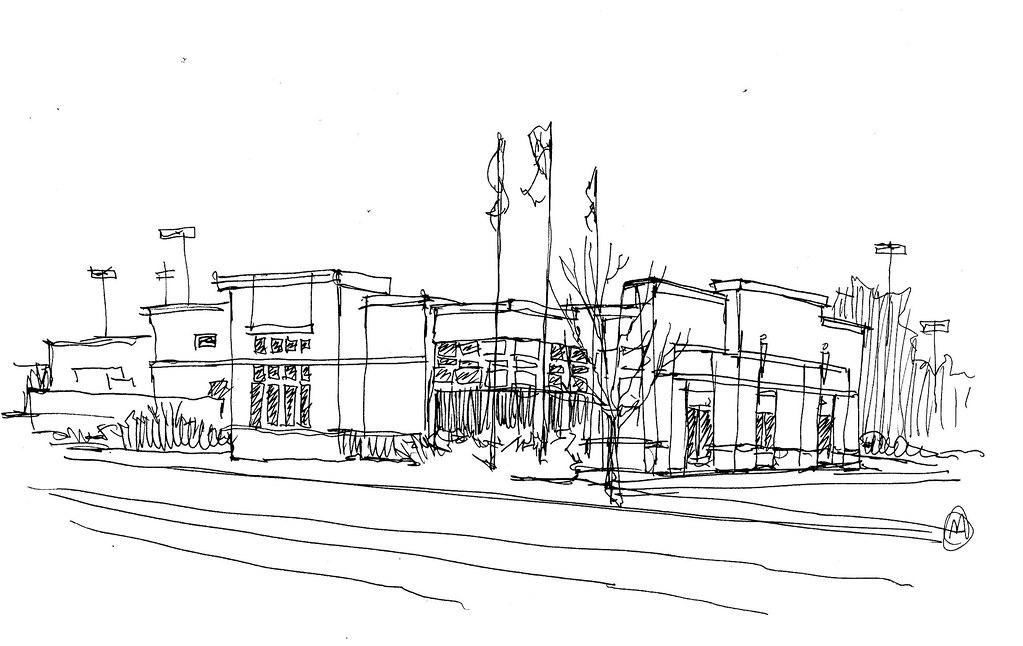 Great weather earlier in the week, especially for January was a stark contrast to the following day when the roads are iced over and all the local schools closed. As late afternoon closed in I found myself with a few free moments and a ready subject at hand, only to discover the only tools in my car were a roller ball pen and a couple blank sheets of sample paper that I’d forgotten was in the trunk. No paint, no fountain pens. 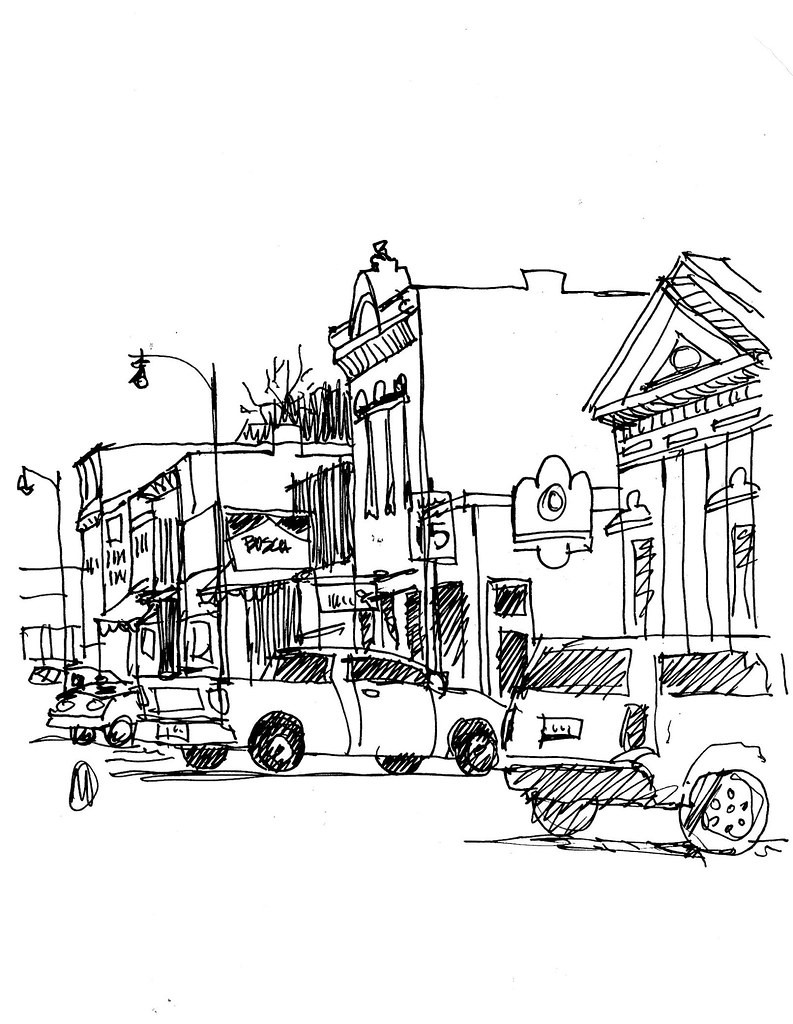 I kept the roller ball ink flowing and enjoyed the fact that I could lean against the trunk of my car to sketch and enjoy the fleetingly nice weather. 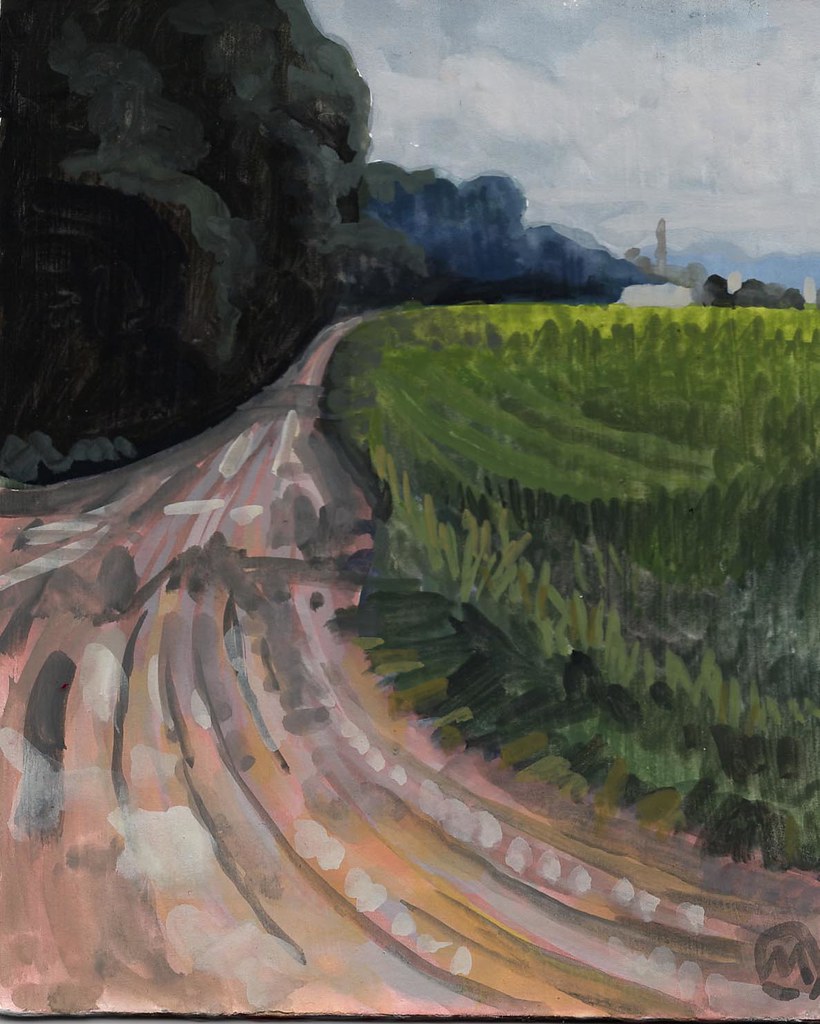 This sketch is 4 x 5 inches on gessoed illustration board. I’ve just playing around with gouache lately, as I did on the following day of icy roads and frozen afternoon. Too much a sissy to go out and paint on location, I worked from one of my old photos for reference…which brought me ’round to one of two quibbles: Painting from a photo leaves me a little cold; my colors feel too beholden to the photo, so shadows tend to be lifeless and dead. I mentioned two quibbles, the other being: Black. Damn it all, I NEVER use black in a color piece, except as line work. And here’s the reason why – it overwhelms everything else. I’d much rather build up shadows from mixtures of my primaries plus a nice “mixing” green. I decided to check to see if Holbein or WN makes my favorite watercolor green mixer, Perylene Green, in gouache. I was dismayed to find the answer to that question is no. 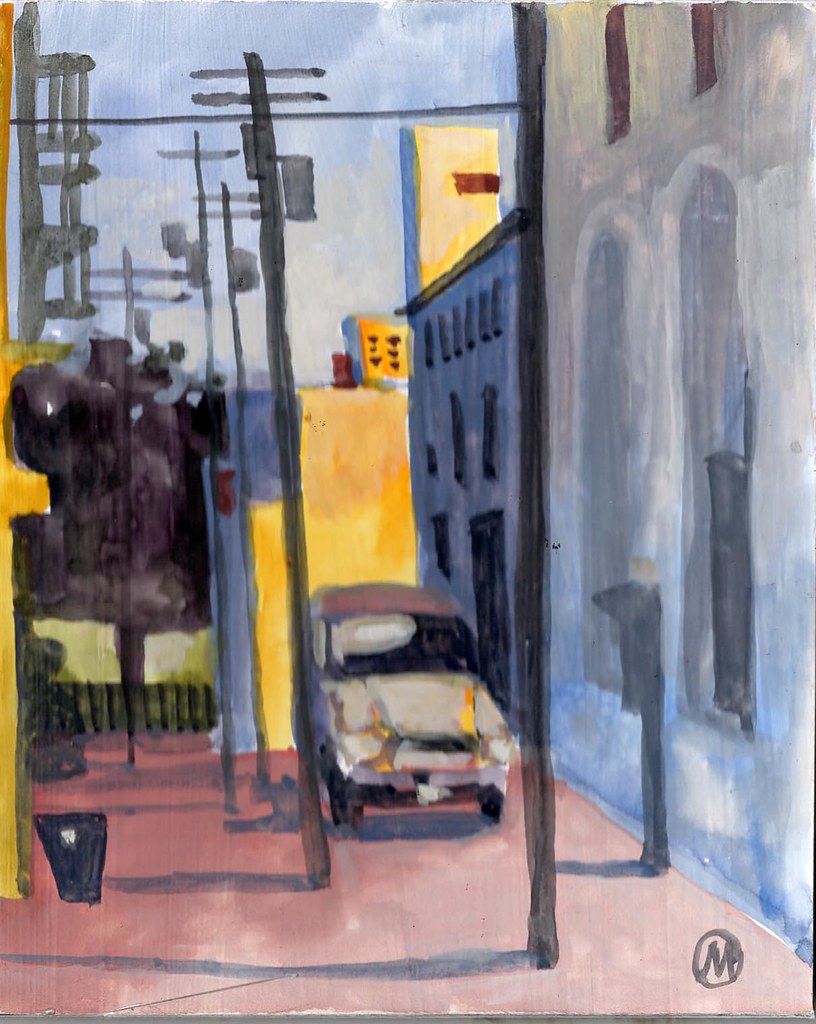 7 January 2018. I gave up oil paint quite a while back, nervous about the long term effects of solvents and other toxins on the body. I always loved the sort of sloppy, thick way of painting though, and I also kind of miss working en plein air. Right or wrong, I make a distinction in my mind between urban sketching/location sketching and plein air painting. I’ve toyed with using gouache as a substitute and while the experience is definitely different than working in oil, a familiar and sort of similar aesthetic is there.

Be that as it may, I’m experimenting at the moment. I won’t be giving up my pens or watercolor – those have become too much a natural extension of my sketch “hand” to relinquish! Rather, I’m wanting to supplement with an approach that might take on a more finished appearance. 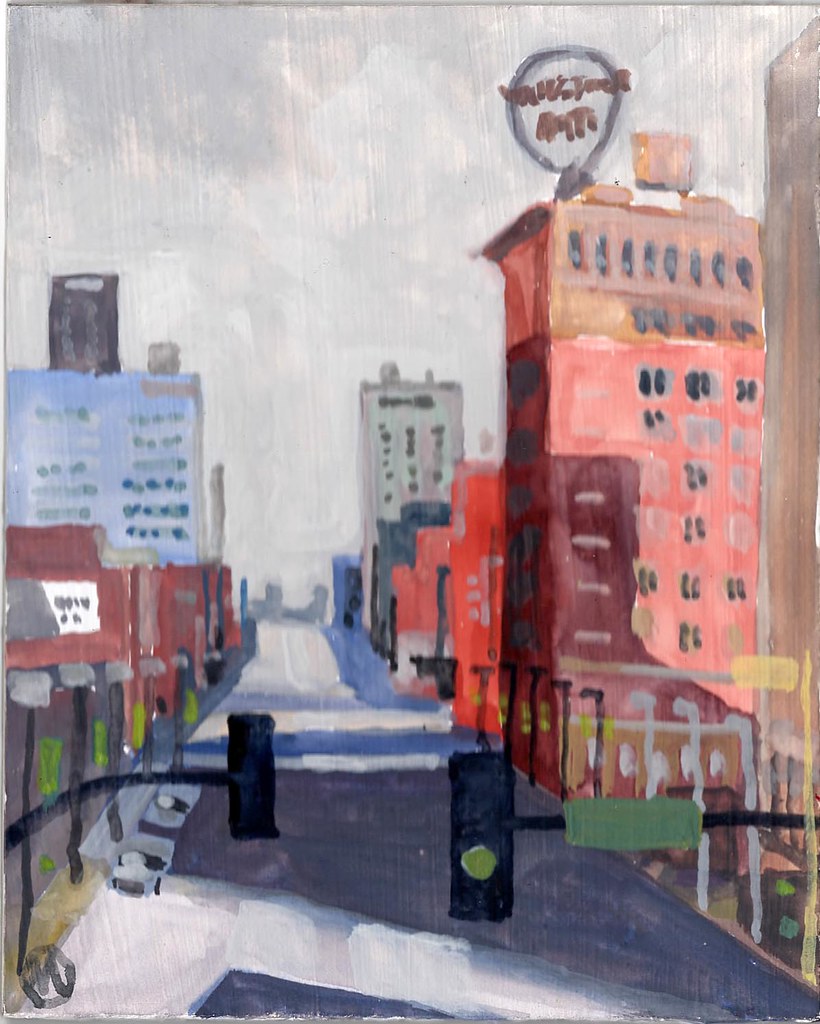 For yesterday’s USkKC monthly sketch out, I brought along a small kit of gouache paints, a water brush (but dang it all, I forgot water and a paper towel!), and a couple of 4 x 5 inch panels of hot press illustration board that I had coated with acrylic gesso. I feel like perhaps I should be working with a flat bristle brush instead of the water brush because I’d like to work the paint in a more ala prima style. Perhaps I’ll give that a shot this afternoon to see how that works. 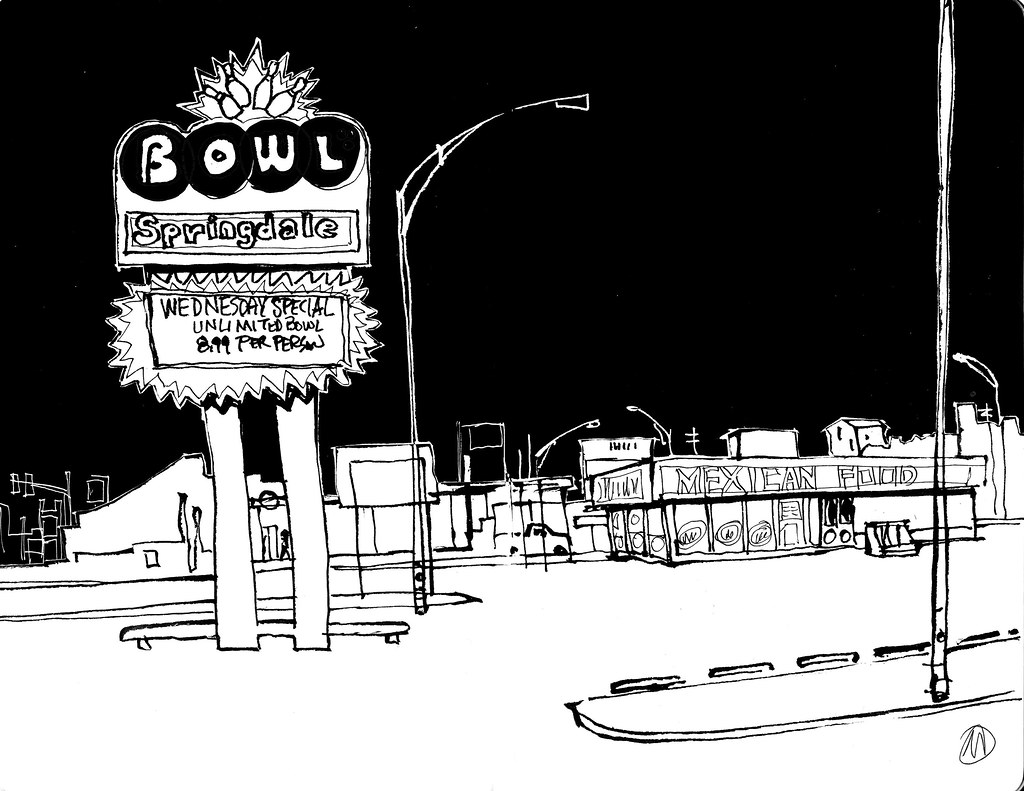 7 January, 2018. This is a “two-post morning” for me, and I’ll begin with my New Year’s weekend in Arkansas. First off, it was cold – not bitterly so, but cold enough that my fingers got pretty stiff pretty quickly. So sketching from the front seat of a running car with the heater going full blast was the order of the day. One cool encounter – or perhaps “rediscovery” is a better way to describe it – was when we came across a neighborhood I lived in for one year in 1971. Being eleven at the time, my memory of the place isn’t totally clear, but it’s changed a lot, and not especially for the better. Buildings have come and gone, grocers have left and the new tenants have evolved into what seems to be weird businesses when viewed through the distorted memory lenses of an eleven year old. But the bowling alley is still there, the place where I was a member of a league, and I think fondly of those times. 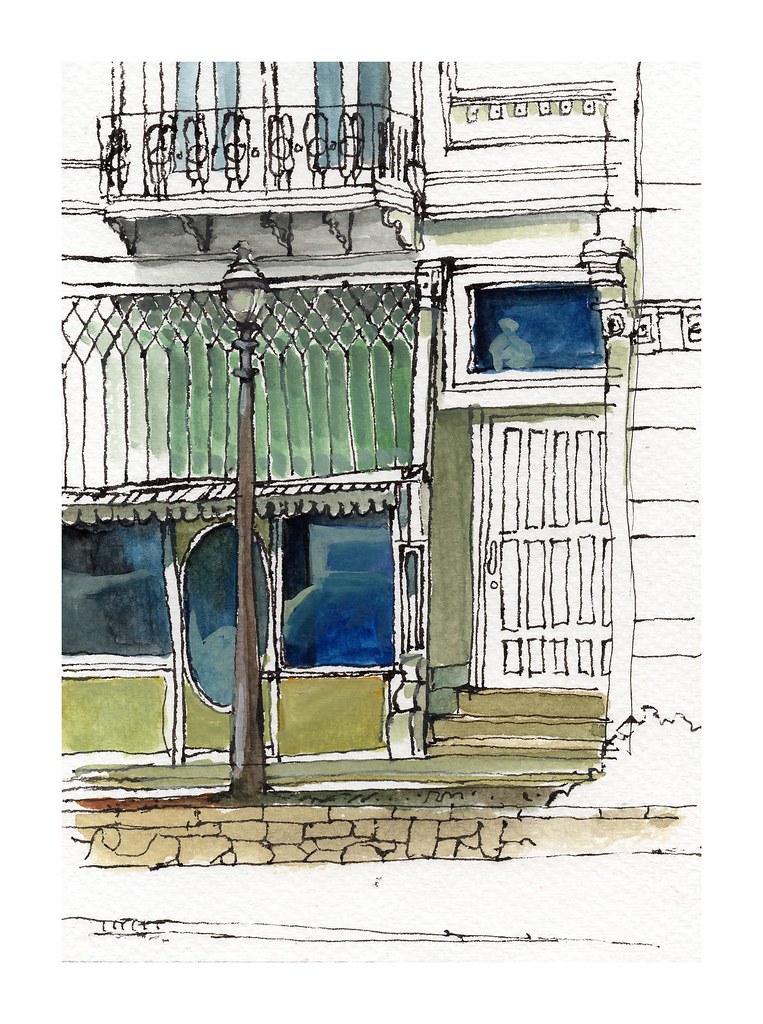 Driving twenty minutes south, we parked and began to wander around the Fayetteville town square. This location is probably housing attorneys or something now, but I imagine it was once some sort of mercantile. 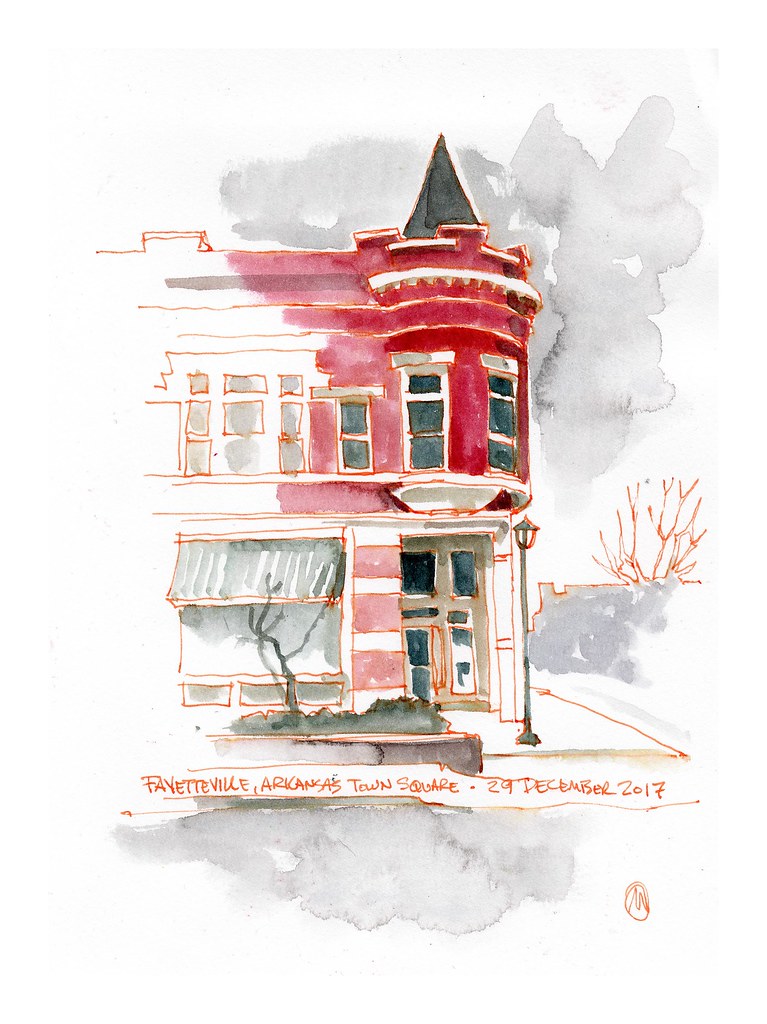 To the immediate right of my imagined mercantile is this interesting architectural design. Again, if I let my imagination run away from facts, it seems like a perfect location for a corner drug store. Was there once a soda fountain? I hope so. 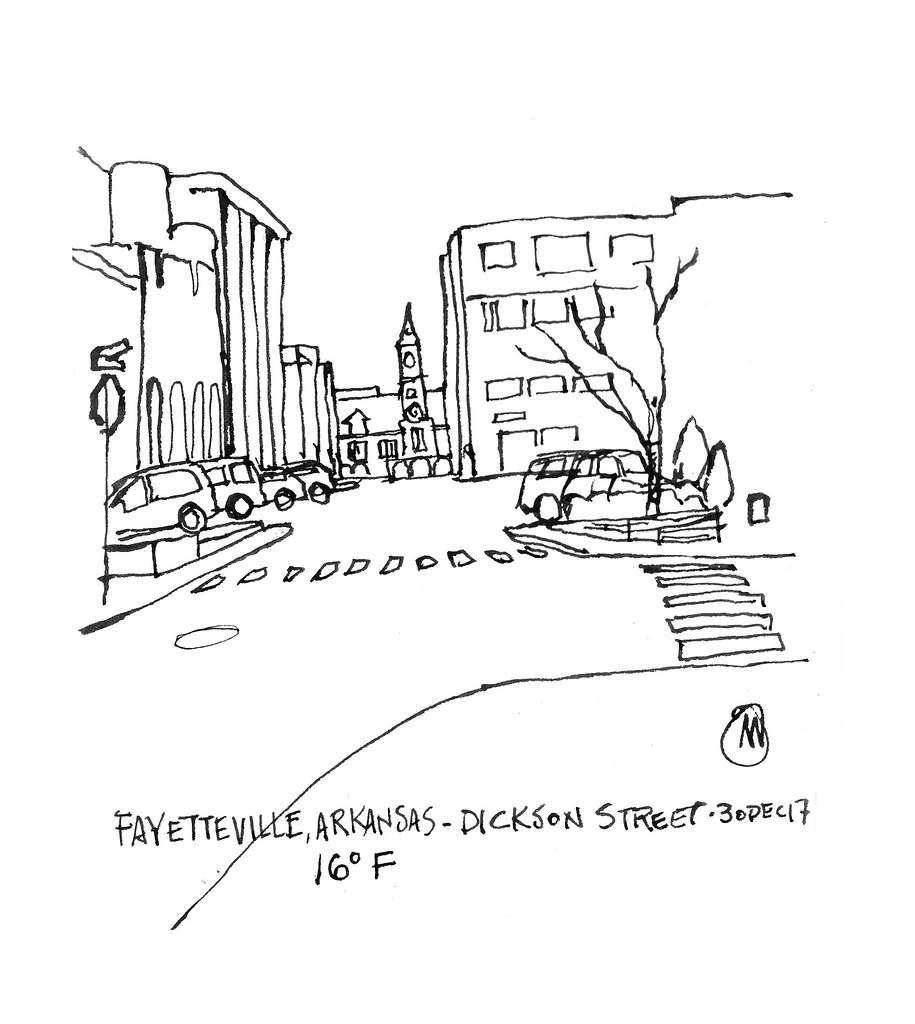 Turning around from my view of the corner drug store, the street scene reveals structures that are a bit more modern, with an older, more stately tower sandwiched between. The day, gray and on the verge of twilight, feels sort of sad and derelict, so I decided against adding color – why overstate the sense of loneliness? 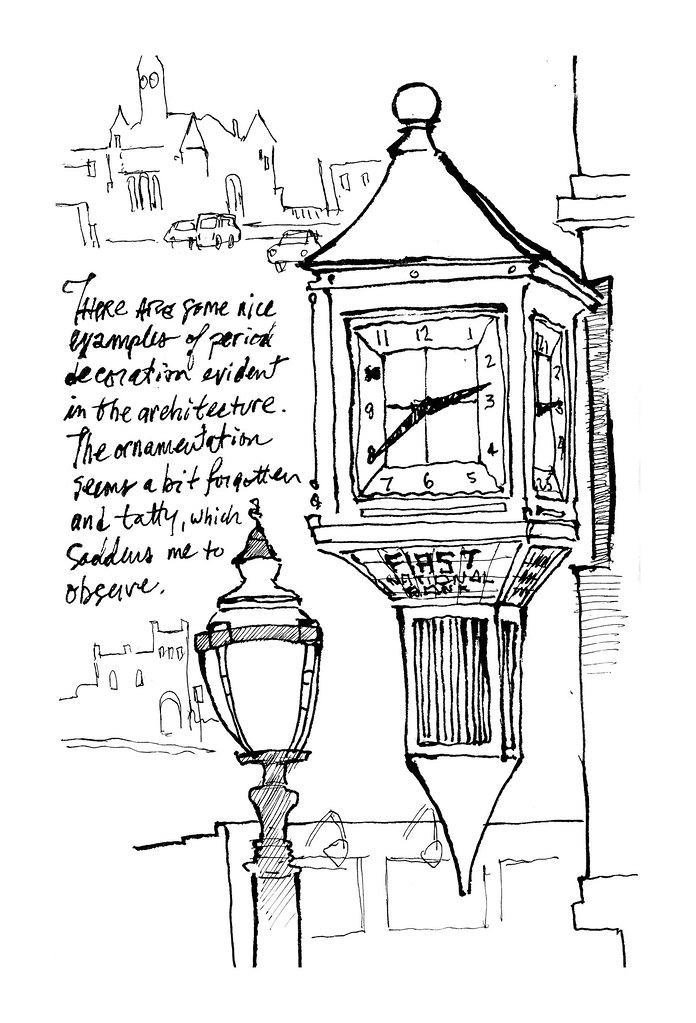 Still standing in the same spot, I turn once more. On the side of a rather ugly building is this nice example of a period clock. What a great architectural detail! 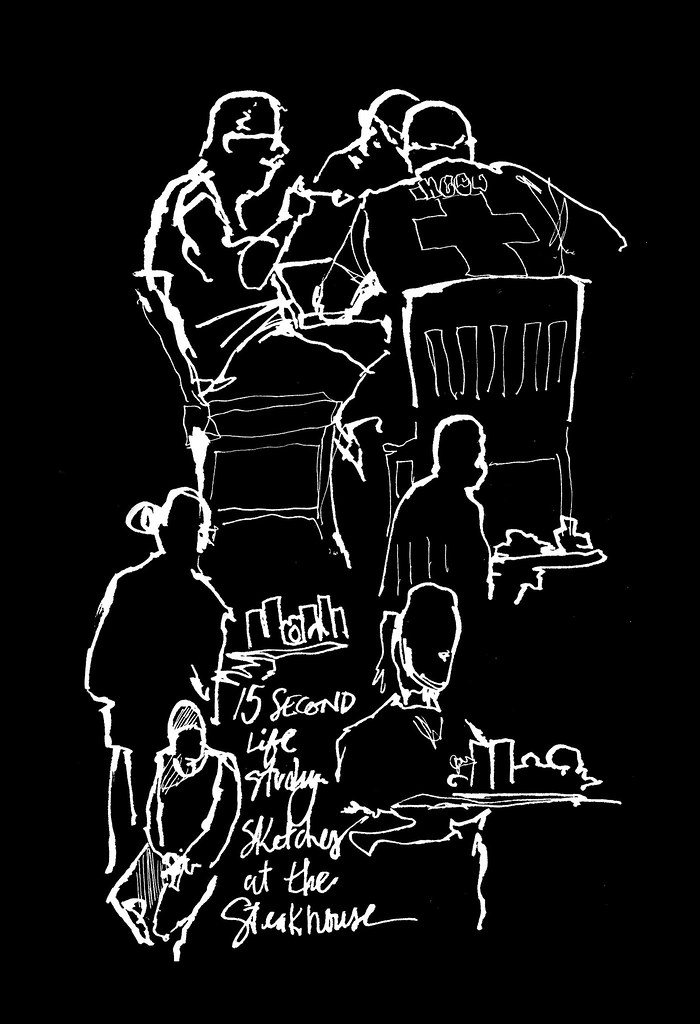 It’s not long before the elements get to me. I pull on a pair of gloves, but they do little to warm my chilled fingers. We stroll through a couple of small stores and then head out in search of warmth and sustenance. At a local steak house, I nurse a beer and make short gesture studies of the other patrons and the staff as I wait on the arrival of a bowl of steak soup.

The pockets of my L.L. Bean field jacket are roomy enough to carry a sketchbook and several pens, along with my tiny watercolor kit. This allows me to sort of randomly select a different tool each time I draw. Primarily though, I either used a Sailor Fude de Mannen fountain pen with black ink or a Lamy Safari medium nib fountain pen loaded with a warm orange-ish ink.