I exhale, visible breath swirls around me, trailing off and around my back as I crunch across frozen grass, then trod the broken sidewalk toward the Plaza. A few other souls stroll the streets – a homeless man nods at me as I wait for a walk signal, his cardboard sign all but ignored by the cars pulling up to the stop light. I’ve not a cent on me or I’d toss something in his can as I pass; I hope he understands: money is no longer paper or coin, it’s a plastic card and invisible. I make a mental note to carry a buck or two in my pocket from now on, for just such times as this.

Crossing into the realm of the Country Club Plaza, the architecture makes an abrupt shift from the canyon of ten-story 1920’s era apartments that have walled my path for the past few minutes. Spanish-influenced, the buildings house the retail and restaurants of the affluent. They, in their Mercedes and Jaguars and Lexuses – Lexi? – they, pass by in heated comfort as I stand in the cold, intentionally stopping, sketchbook in the crook of my arm, to admire the tiles and arches and spires. The street slopes in odd ways and curves in even more odd ways, as if the planners had absolutely no intention of conforming to something so blasé as a grid.

20 February, 2019. Cool colors puddle, then spread, traveling through a clear sheen of water, landing with the softness of cotton. Paper, rough to the touch, is white – but not a pure white, there’s an honesty to the “off-ness,” a nod to the organic nature of fibers from which it comes. Still, hues glow a bit, transparency allowing the surface below to redouble a sense of saturation. There’s a stillness here, and I like it.

9 February, 2019. If nothing else, this week of miserable weather has served as something of a muse.

26 November, 2018. Today is a “snow day” in Kansas City. If you live in in the south, you have no idea what that is; despite all the unpredictable types of weather you experience, snowfall isn’t one of them. And if you live in the mountains, or up north – or especially if you reside as I once did in Alaska, snow is such an integral part of cold weather that it seldom has a travel impact on your world in the way that the brutal combination of windchill, temperature, and snow fall does to those of us in the Midwestern and Plains states. Snow paralyzes traffic. Roads turn into dangerously slick channels down which automobiles slide through yards, ditches, and into trees and other cars. Black ice is a real thing, and scary as hell.

And school is called off, mostly because it’s unsafe for kids to huddle at bus stops when the windchill can cause physical harm. That’s a “snow day.”

Everyone else has to go to work, but teachers and students are off. I hate snow days because we have to make them up – for every day off, we have another added to the end of the Spring school term, thus shortening my summer break.

But the first heavy snowfall of the year is also a remarkable thing. Yesterday we experienced blizzard conditions with formidable winds, hours of snowfall twisting into bizarre and fantastic drifts, visibility limited to a few hundred feet. Watching it accumulate all afternoon from the comfort of my studio window is something of a treat. And today the sun has emerged – it’s still quite cold, mind you, and no chance of things melting off. It is, after all, a “snow day” and so I’m at home instead of in the classroom. The morning light casts a warm highlight across the snow-covered ground behind my house; the shadows are an exercise in color theory, perceptibly blue. In the distance, trees that weeks ago were aflame in red and orange are now dissembling hues of grey.

If I were a true plein air painter I’d be outside capturing this scene. But it’s warm inside, my portable easel is conveniently positioned at a window, and, well … after all, it is a snow day. 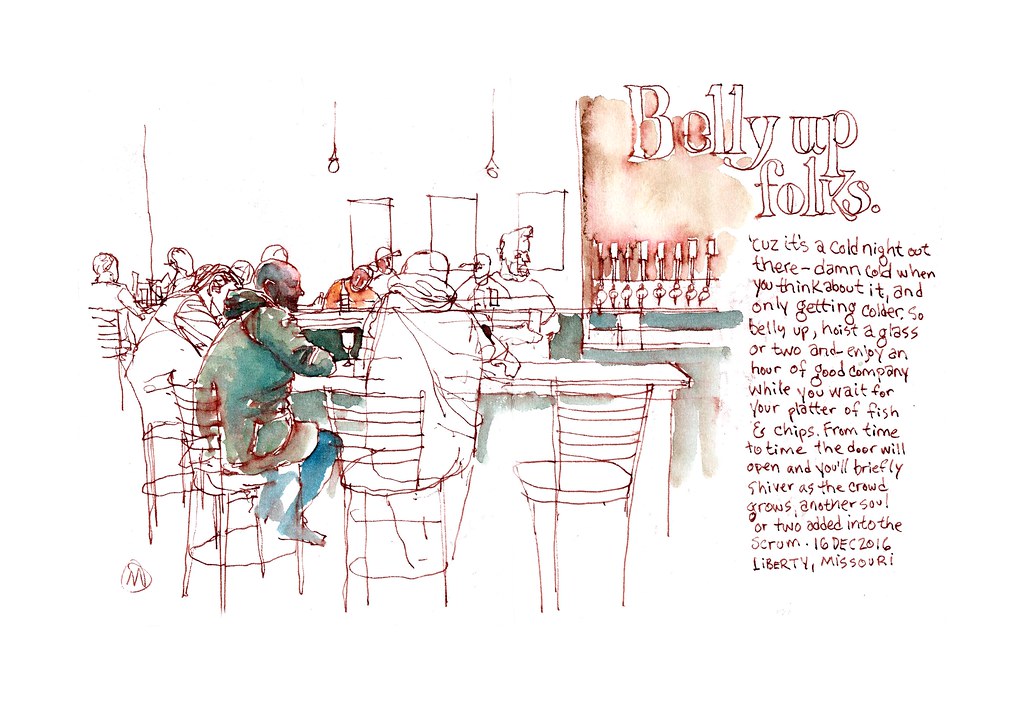 16 December, 2016. Belly up, folks, because it’s a cold night out there – damn cold when you think about it, and only getting colder. So belly up, hoist a glass or two, and enjoy an hour of good company while you wait on your platter of fish and chips. From time to time the door will open and you’ll briefly shiver as the crowd grows, another soul or two added into the scrum. (Lamy Safari medium nib fountain pen and watercolor wash on Strathmore Aquarius II.)