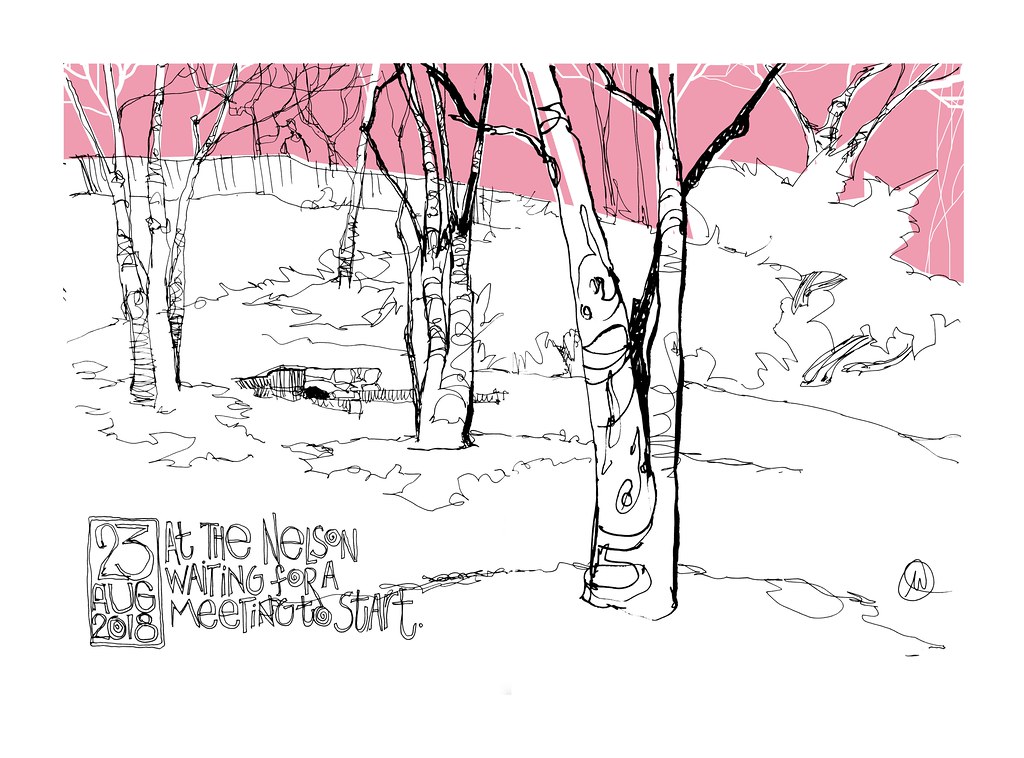 (Number four in a series of ten ideas I have about sketching.)

26 August, 2018. I had an early morning meeting in the city on Thursday, and misjudged the timing of my arrival so that I pulled up to the art museum way too early. Taking up pen and sketchbook, both of which were on my backseat, I walked from the car and found myself under a stand of trees, settled in on a park bench and I began to sketch my surroundings.

Ugh! My fountain pen almost immediately ran dry… what the heck? Had I forgotten to refill? (Yes.) I finished the sketch with a different pen, one I happened to have in my pocket.

I’ve been thinking a lot about these ten ideas I have about sketching lately. Some of my students think I should turn them into a book, but honestly it’s much more likely I’d hand print something and bind it together into a nifty little handmade thing. That would satisfy me more than a “how to” publication, I think.

So these ideas: they really aren’t a “how-to” book. In a sense, they are an act of immersion. A purposeful liberation. A rebellion from the perception that drawings must look “real,” and a realization that the most satisfying sketches instead look “convincing.” Believability trumps photographic accuracy every time. These ideas are about drawing with expression, and reacting to what is there in front of you. Being of the moment. Being there.

These are not hard and fast “rules,” but suggested ideas. Like most “rules,” I tend to ignore one or all of them from time to time. But invariably, when I find a sketch is somehow lacking, somehow dissatisfying, a quick analysis generally reveals that I’ve ignored one of these principle ideas. So there you have it.

“Be” there. Sketch what you see, not what you think you know. Observe. People and things move, and so do you. Give yourself permission to let that happen in your sketches. Stuff overlaps in the real world. Things are in front of other things, and they are seldom all magically lined up like glasses on a shelf. Allow yourself to draw what you see, and react to changes in your sketches… your sketches may very well be a record of what happens during the time you’re drawing and NOT a snapshot of one second in time. Think about that.